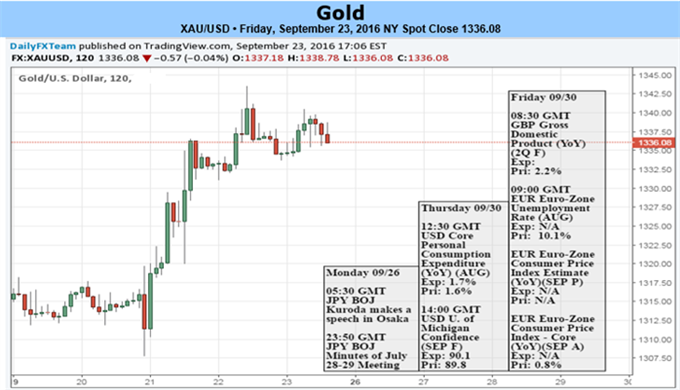 Gold prices are markedly higher this week with the precious metal up 2.26% to trade at 1339 ahead of the New York close on Friday. The rally marks the largest weekly advance since mid-June & the largest weekly range since late-July and comes amid a sharp pullback in the greenback, prompted by Wednesday’s Fed interest rate decision.

The FOMC decided to hold interest rates this week as expected but reduced their outlook for future rate hikes. The focus has shifted from the timing of the next rate-hike, to the overall pace of trajectory of monetary policy moving forward. Indeed the updated interest rate dot-plot saw committee members lower expectations for both the 2017 median estimates as well as the longer-run terminal rate. The dollar came under substantial pressure and fueled demand for gold as a store of wealth amid continued easing by the world’s largest central banks. As it stands, Fed Fund Futures remain largely unchanged with expectations still heavily weighted towards a December rate-hike.

Looking ahead to next week, traders will be lending a keen ear to a fresh batch of central bank rhetoric with

Fed Governor Daniel Tarullo, Dallas Fed President Robert Kaplan, Vice-Chair Stanley Fischer, Chair Janet Yellen, Cleveland Fed President Loretta Mester, Kansas City Fed President Esther George and Fed Governor Jerome Powell slated for speeches. Also note we get the third and final revision of 2Q GDP with consensus estimates calling for an uptick in the annualized rate to 1.3% q/q from 1.1% q/q. Stronger US data could weigh on gold prices in the near-term but the technicals suggest that gold is primed for volatility in the days ahead. 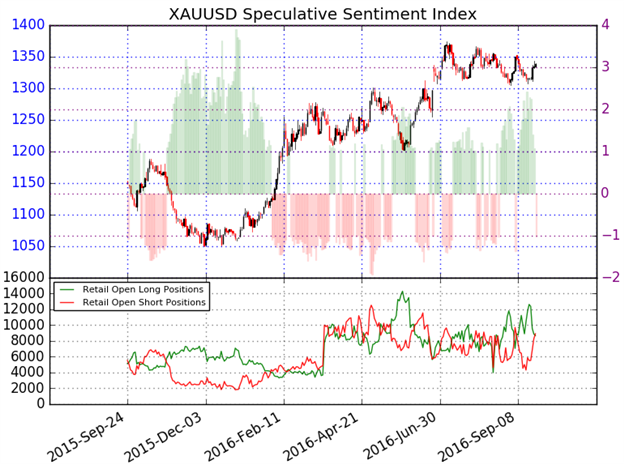 A summary of the DailyFX Speculative Sentiment Index (SSI) shows traders are net short Gold- the ratio stands at -1.05 (49% of traders are long)- weak bullish reading. The last time SSI was net-short was on September 7th which is the day the monthly high was registered in price. Note that short positions are 115% above levels seen last week while long positions have fallen 15% over the same time period, suggesting that retail traders are attempting to fade this rally into the range highs. That said, open interest has been building and a continued increase in short-exposure suggests that the risk remains for a breakout of the recent consolidation as prices continue to hold within the initial monthly opening range. 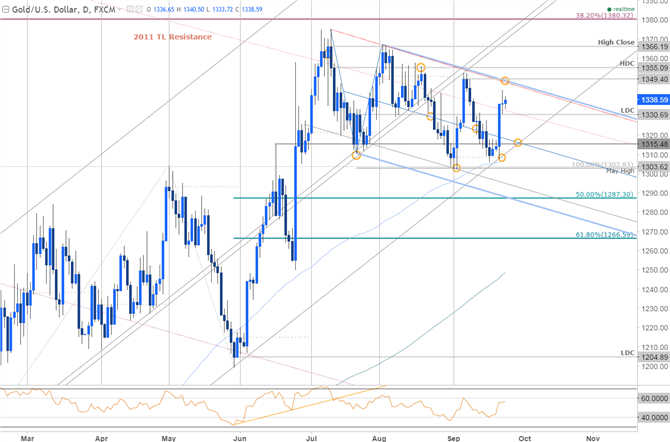 From a technical standpoint, gold is eyeing near-term resistance at 1349 where the September high-day close converges on trendline resistance extending off the yearly high. A breach above the 2016 high-day close at 1355 is needed to validate a breakout in prices with such a scenario eyeing subsequent topside objectives at 1366 & 1380.

Interim support rests at 1330 with our near-term bullish invalidation level now raised to 1315. Bottom line: heading into next week look to fade weakness while above longer-term slope support with a breach above the descending median-line formation needed for resumption of the broader up-trend.