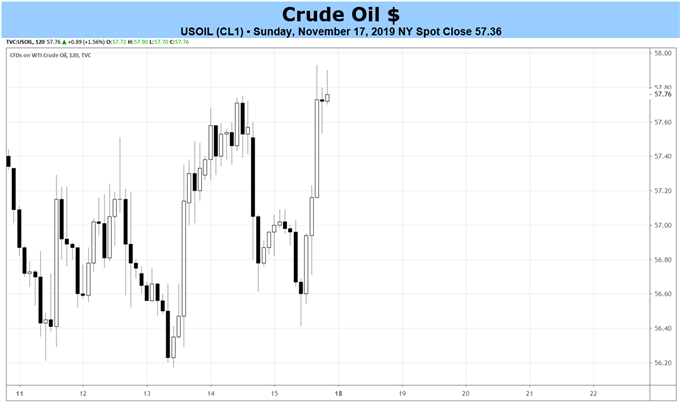 Energy markets finished out the end of last week strong, helping crude oil finish positive for the second week in a row and the fourth time higher over the past six weeks overall. Crude oil prices added 0.73% on the week, which was largely propelled by gains on Friday (1.76%), notably setting up a bullish outside engulfing bar on the daily timeframe.

Meanwhile, with Brent oil’s 1.63% rise on Friday, the North Sea benchmark was able to close the week up by 1.21%. The gains for both Brent oil and crude oil are impressive in the face of a macroeconomic environment producing headwinds at each turn.

Crude oil prices have been enduring a careful balancing act amid meaningful shifts in supply and demand in recent weeks. On the demand side, traders are more optimistic that a resolution to the US-China trade war will reduce concerns over global growth. On the supply side, there are growing signs that OPEC will decline another round of production cuts when the cartel gathers next month. We’ll dive into both the supply and the demand sides below.

The latest data from the US EIA released on Thursday, November 14 revealed that oil inventories increased for the seventh time in eight weeks. According to a Bloomberg News survey, traders were looking for inventories to have increased by 1.6 million barrels through the week through November 8; instead, 2.2 million barrels were added. Since the start of September, there has been a net-increase more than 40 million barrels to US energy inventories. The resiliency of crude oil prices during this period of rising supply is noteworthy.

The US economy appears to be heading towards one of its worst quarters in recent memories, as the Atlanta Fed GDPNow Q4’19 GDP estimate is now at a meager 0.3%. But amid signs that PMI readings are stabilizing in Europe and North America, relative to the backdrop of a hopeful resolution to Phase 1 of the US-China trade war deal, it seems that traders are otherwise treating disparaging economic data as red herrings. As traders remain distracted by the impeachment hearings, signs that the US-China trade negotiations are on uncertain ground has seemingly been ignored. 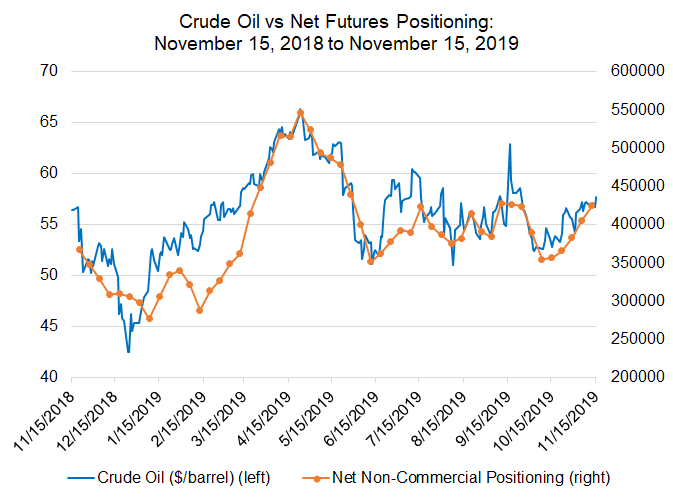 Looking at positioning, according to the CFTC’s COT for the week ending November 12, speculators increased their net-long Crude Oil positions to 424.6K contracts, up from the 406.1K net-long contracts held in the week prior. Net-longs have now climbed for the past five consecutive weeks after bottoming out during Q4’19 (thus far) during the week of October 8, 2019 (355.1K net-long contracts).

It’s still the case that crude oil net-long positioning remains far below the highs seen over the past two years, when 739.1K net-longs were held during the week ending February 6, 2018.

As is often the case during the middle of the month, the forex economic calendar tends to die down and produce fewer meaningful data releases that would otherwise hold sway over energy markets. There are no GDP or inflation (consumer price index) reports from the major economies over the coming days, nor are there any central bank rate decisions. 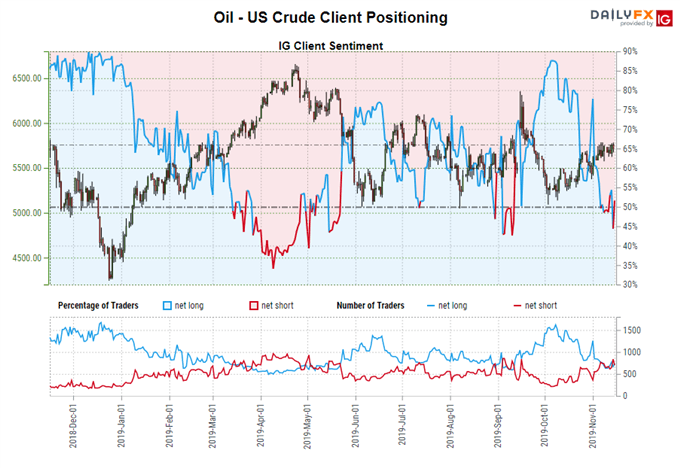 We typically take a contrarian view to crowd sentiment, and the fact traders are net-short suggests Oil - US Crude prices may continue to rise. Positioning is less net-short than yesterday but more net-short from last week. The combination of current sentiment and recent changes gives us a further mixed crude oil price trading bias.