Crude Oil Holds Gain on OPEC+ Fallout and US Dollar Softens. Where To From Here?

Crude oil continued to recover as the fall-out from OPEC+ sticking to the planned increases in production is digested. The extra 400,000 barrels a day due to be added in January is seen as allaying Washington’s concerns. The group gave themselves flexibility to adjust output at short notice as uncertainty around the impact of Omicron on global growth persists.

Asian equities were mixed today even though risk sentiment seemed to steady after Friday’s rout. Hong Kong’s Hang Seng Index was the weakest of the lot, down over 1.5% at one stage. The tech, entertainment and property sectors continued to weigh on that market.

US futures are currently pointing toward a positive start for Wall Street.

Risk assets made somewhat of a recovery today with speculation of a possible cut in reserve ratio requirement (RRR) in China. The Australian and Canadian Dollars were the best performing currencies. CHF, EUR and JPY were the underperformers to start the week.

Bitcoin collapsed 21% over the weekend and is seeing higher correlation to US stocks and risk assets generally.

Through all the chaos of last week, gold avoided the volatility and moved sideways. It has so far held on to Friday’s gains. Iron ore prices are consolidating near USD 94 a tonne on the Dalian Commodity exchange.

US Treasury 10-year yields recovered a few basis points but remains below 1.40%. Back-end yields continue to collapse, while front end yields are holding up as the Fed turned hawkish.

Looking ahead, there’s not much data of note in the US today, so the market will be looking for any commentary from Fed speakers. Tomorrow sees the RBA meeting to decide on monetary policy.

based Bollinger Band. When it closed back inside the band, the price consolidated and edged up. 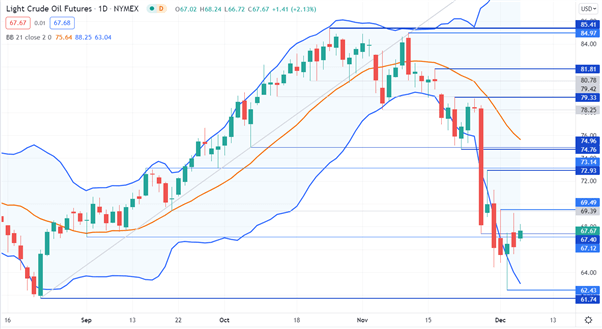