New Zealand reported an impressive first-quarter gross domestic product (GDP) at 2.4% on a year-over-year basis, versus estimates calling for 0.9%. The quarterly figure crossed the wires at 1.6%, also beating expectations of 0.5%. The GDP figures represent a strong tick higher from the December quarter when a contraction of 1.0% occurred. 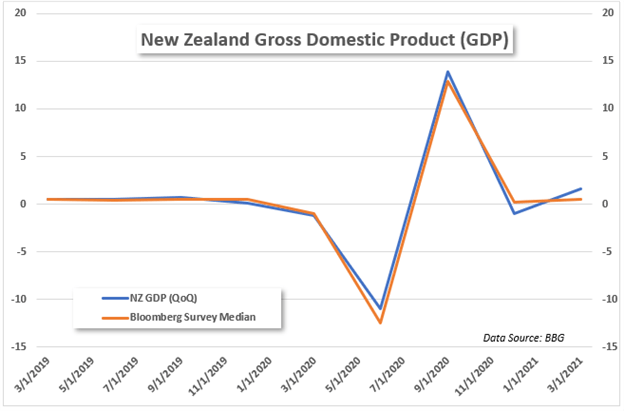 Asia-Pacific markets may face some pressure after the US Federal Open Market Committee announced its policy decision, causing Treasury yields and the US Dollar to rocket higher. The Greenback rose near a full percentage point via the DXY index, and the 2-year Treasury yield rocketed to its highest point in over a year. The risk-sensitive Australian Dollar fell against many of its peer currencies.

Though the Fed’s statement failed to indicate a timeline for taper talks, which has been a primary theme regarding monetary policy as of late, the so-called dot plot – which forecasts members’ outlooks on rates – shifted left, with 13 members seeing a hike in 2023, up from 7 in the latest round of projections.

Australia’s employment report for May will cross the wires later today, with analysts expecting to see 30k jobs added to the economy while holding the unemployment rate firm at 5.5%. The participation rate is seen ticking up to 66.1% from 66.0%. A better-than-expected print could fuel hawkish calls for the Reserve Bank of Australia (RBA) and, in turn, inject strength into the Aussie Dollar. This will be the second report following the end of the JobKeeper wage subsidy program ending.

Later in the day, China will release house price figures, and Hong Kong will release an update on its unemployment rate. Speaking of China, authorities in the economic powerhouse country have stepped up efforts to cull speculation in commodities markets, specifically metals. The state-owned Assets Supervision and Administration Commission ordered state-owned companies to reduce exposure in markets overseas, according to a Bloomberg report citing people familiar with the matter.

Moreover, China’s National Food and Strategic Reserves Administration announced plans to release metal reserves to cull rising commodity prices, a measure not taken in over ten years. China is the top global consumer of metals. The move is the latest escalation in a string of measures aimed at reducing the sharp rise in prices.

The 100-day Simple Moving Average (SMA) appeared to step in to offer a degree of support after breaking lower through a support channel overnight. NZD/USD dropped over a full percentage point, reaching levels not traded at since mid-April. While the GDP beat propelled NZD higher, only a portion of the earlier losses have been recovered

Moreover, a bearish SMA crossover between the 20-day and 50-day moving averages now appears unavoidable even with this morning’s rebound. MACD is accelerating to the downside, suggesting another test of the 100-day SMA may be on the cards in the coming days. 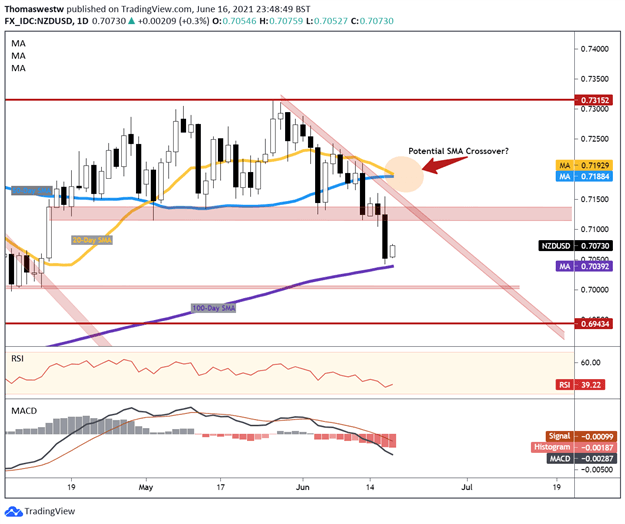