- GBPUSD has steadied in Europe Wednesday after falling the previous day and again in early Asian trade.

- Sell the rumor, buy the fact could be the market theme in the hours ahead.

- Short-dated Sterling volatility is picking up, but nothing like it did both in January and last year.

GBPUSD has stabilized in Europe Wednesday after its recent sharp falls, suggesting that a bounce is possible once the UK’s Permanent Representative to the EU, Sir Tim Barrow, has handed the letter to the President of the European Council, Donald Tusk, beginning the formal process of the UK leaving the EU.

UK Prime Minister Theresa May is expected to give a speech to the Westminster Parliament about the triggering of Article 50 of the Lisbon Treaty at 1130 GMT, immediately after the weekly Prime Minister’s Questions session in the House of Commons, and an EU response could come within 24 hours. According to the European Council website, the letter will be handed over just before then, at 1120 GMT, and that will be followed by an EU press statement and briefing.

However, May is unlikely to deviate far from her Lancaster House speech in January, setting outthe 12 priorities that the UK government will use to negotiate Brexit. Tusk is also unlikely to give much away ahead of the publication of the EU’s draft negotiating guidelines, perhaps late this week.

Against this background, GBPUSD has traded in an orderly way, suggesting another selloff is unlikely. 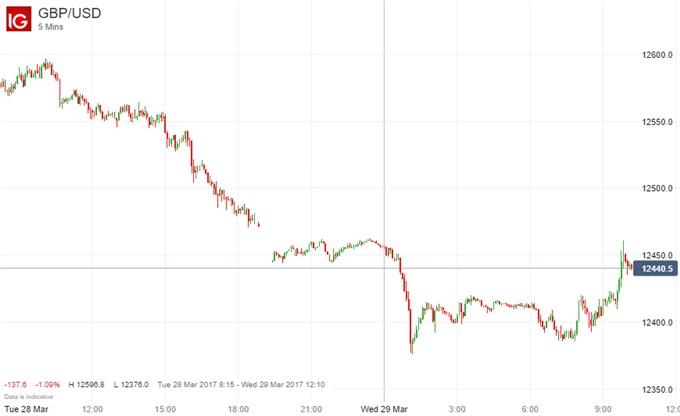 Interestingly, short-dated Sterling volatility is picking up, but nothing like it did both in June last year, at the time of the UK referendum vote to leave the EU, and again in January this year.

Looking further ahead, the performance of GBPUSD will likely depend on whether the EU decides to work with the UK or punish it for deciding to exit. Another important factor will be any further moves towards Scottish independence, although a second independence referendum seems unlikely to take place for another two years if at all – and is therefore not likely to impact Sterling near-term.

London-listed financial stocks, though, could react more quickly if the Brexit negotiations appear to endanger London’s position as one of the world’s major financial centers.

UK Finance Minister Philip Hammond admitted Wednesday that the UK would need to make concessions to the EU in order to secure the best deal for the country to leave the EU.