STATE OF PLAY: Italian PM Conte has informed his cabinet that he will resign, which has come ahead of the Senate vote on the justice minister’s annual report, where there had been a risk of a government defeat. The decision to resign was largely expected after Former PM Renzi’s party decided to withdraw support from the ruling coalition. This had come amid Renzi’s criticism of Conte over the handling of the coronavirus crisis and management of EU recovery funds.

WHAT NEXT?: Despite resigning as PM, Conte may well be the next PM in a new government provided that President Mattarella gives Conte a new mandate to try to form his third cabinet that can gain a majority in the house and senate.

MAJORITY SCENARIO: For a majority in the House and Senate, 316 and 161 votes are needed. As it stands, the 5-Star Party who have 191 House and 92 Senate seats, as well as the Democratic Party (PD) who have 93 House and 36 Senate seats, stated that they will support Conte in a new government. Elsewhere, the Health Minister of the Freedom and Equality party have suggested that they would continue to side with Conte, thus providing another 12 House and 6 Senate seats. That said, Conte would still fall short of a majority and therefore would either look to reconcile with Renzi’s party (27 House and 17 Senate seats) or seek to find support from those outside of the current coalition. However, failure to find additional support could see Conte’s position become untenable.

NO MAJORITY SCENARIO: Should Conte come up short, the President could either appoint another PM to try form a new government, with a leader from PD or 5-Star Party. Although, should that fail, there could be a technocrat government, which would an interim government with Former ECB President, Mario Draghi, touted as a possible leader. The purpose would be to ensure politically stability in Italy, allowing for COVID relief funds to pass with ease. The worse case scenario, would be for snap elections to be called. Not only is the timing undesirable given the coronavirus crisis, Matteo Salvini’s Eurosceptic Lega party is also leading in the polls, in which case a repricing of election risks would likely see BTP/Bund spreads widen with EUR/JPY weakening. It is worth noting that while spreads would widen under a snap election the degree of widening is likely to be stemmed by the ECB’s PEPP program, which remains supportive of BTPs. 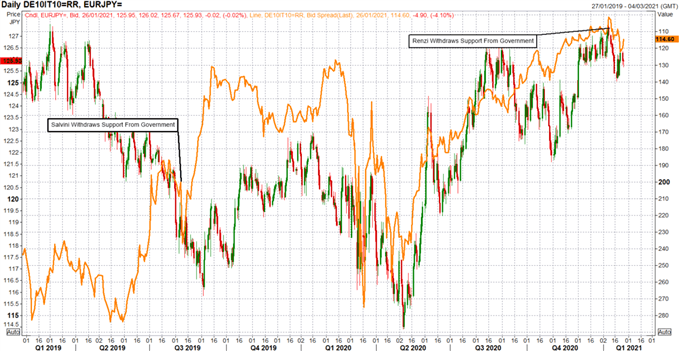 Find out more on the impact of politics on financial markets with this overview, click here