A Guide to Day Trading Bitcoin and Other Cryptocurrencies

Monday’s cryptocurrency mini-rally looks to have run its course with the 200-day moving average capping any upside breakout. Bitcoin has traded below the longer-dated ma for nearly two weeks and needs a driver to break and close above this important technical indicator. In addition, the 20-day ma is looking set to break below the 200-dma, highlighting the current negative sentiment.

If we look at the 50-day moving average - the blue line on the chart – we can see that this is now approaching the 200-dma, warning of a potential ‘death cross’. Back on April 24 this year, the 50-dma broke above the 200-dma, producing a bullish ‘golden cross’. Bitcoin rallied hard from this cross-over, moving from around $5,000 to this year’s high of $13,862. The two moving averages are now at their narrowest gap in around five months and continue to close on each other. If the 50-dma goes below the 200-dma, a ‘death cross’, this usually signals a further, potentially sharp, sell-off. While this cross-over may still take weeks to form, the daily Bitcoin chart is looking more ominous. 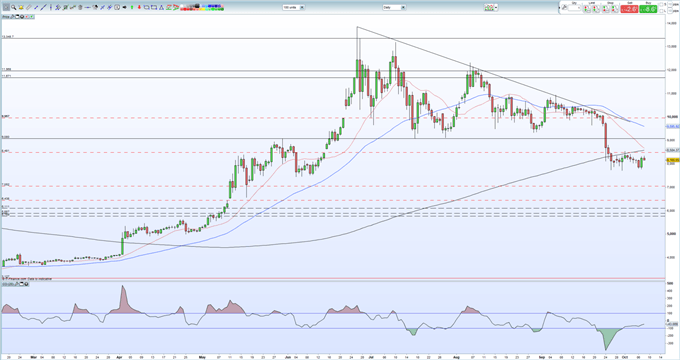