USD/JPY bounces back from a fresh weekly low (113.96) amid the rebound in global equity prices, and the exchange rate may consolidate over the coming days as it appears to be defending the monthly low (113.48).

Recent price action in USD/JPY raise the scope for a further decline as it snaps the series of higher highs and lows from earlier this week, but the exchange rate may face range bound conditions ahead of the Federal Reserve interest rate decision on January 26 as risk appetite recovers.

It remains to be seen if swings in market sentiment will influence USD/JPY during the Fed’s blackout period as it failed to track the recent advance in longer-dated US Treasury yield, but speculation for an imminent shift in US policy may keep the exchange rate afloat as the Bank of Japan (BoJ) sticks to its easing cycle. 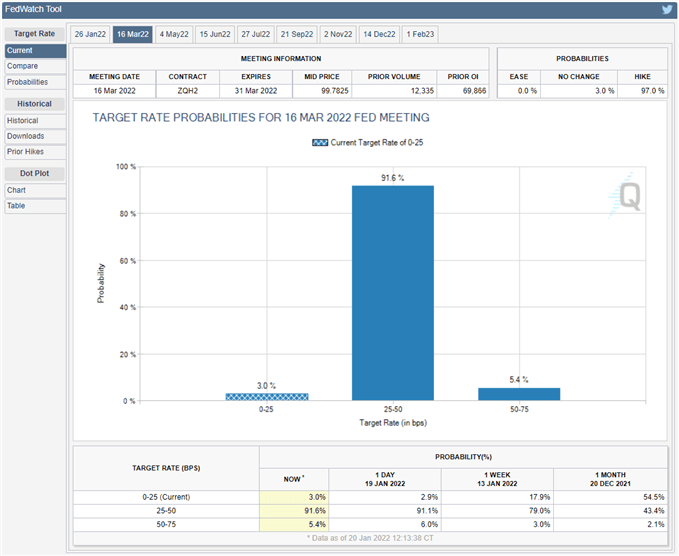 As a result, USD/JPY may reflect a bullish trend in 2022 as the Federal Open Market Committee (FOMC) plans to normalize monetary policy over the coming months, with the CME FedWatch Tool now showing a greater than 90% probability for at least a 25bp rate hike in March as Fed Governor Lael Brainard reveals that “we started to discuss shrinking out balance sheet” while testifying in front of the Senate Committee on Banking, Housing and Urban Affairs.

In turn, the decline from the monthly high (116.35) may turn out to be a correction in the broader trend amid the deviating paths between the FOMC and BoJ, and the tilt in retail sentiment looks poised to persist as traders have been net-short USD/JPY since late-September. 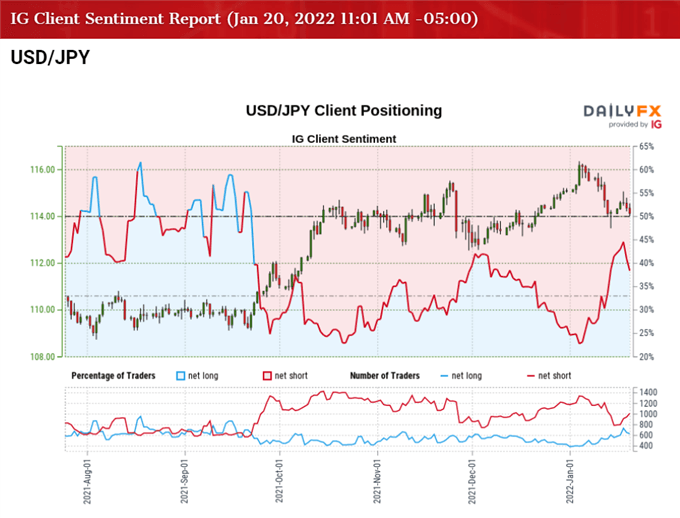 The IG Client Sentiment report shows 38.75% of traders are currently net-long USD/JPY, with the ratio of traders short to long standing at 1.58 to 1.

The number of traders net-long is 3.79% higher than yesterday and 17.76% higher from last week, while the number of traders net-short is 1.48% lower than yesterday and 4.51% lower from last week. The rise in net-long position has done little to alleviate the tilt in retail sentiment as 40.20% of traders were net-long USD/JPY earlier this week, while the decline in net-short position comes as the exchange rate bounces back from a fresh weekly low (113.96).

With that said, USD/JPY may face range bound conditions ahead of the Fed rate decision as long as it defends the monthly low (113.48), and the decline from the monthly high (116.35) may turn out to be a correction in the broader trend amid the deviating paths between the FOMC and BoJ.