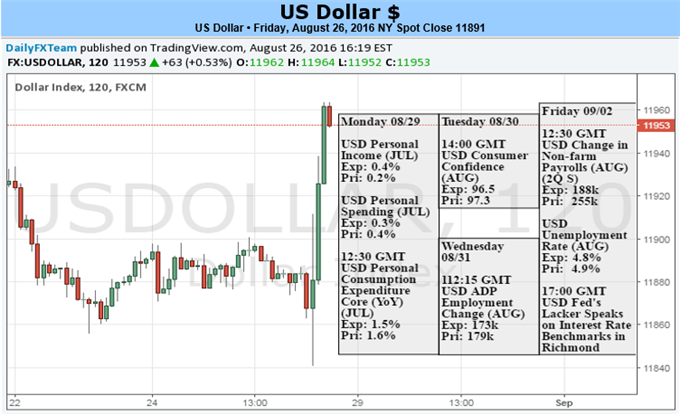 It has been months since the market has looked at the Dollar with as much interest as the currency was paid through the close of this past week. The Greenback rallied sharply through the close of this past week with significant help from Fed Chair Janet Yellen at the Jackson Hole Symposium. The single-day rally was the biggest since the safe haven’s surge in the wake of the Brexit vote, but there is perhaps deeper conviction in the ability of monetary policy as a catalyst over the consistently faltering risk aversion appeal for the currency. Is this a charge that will carry through the coming week via conviction and momentum? While possible, it will be a struggle to maintain.

Looking to the Dollar’s late-in-the-week move, we can trace the catalyst to both monetary policy and risk influences – though the latter is likely a limited reflection of the former. The spark was comments that came from the annual gathering hosted by the Kansas City Federal Reserve in Jackson Hole, Wyoming. The market was closely watching what Chairwoman Yellen would say on the economy and monetary policy moving forward. Her remarks were certainly optimistic. She stated that the economy was “nearing the Federal Reserve’s statutory goals” and that the outlook had improved. While that is far from a promise to hike on September 21st, it is materially more hawkish than the market had considered from the Fed.

Bolstering the hawkish view assessed after Yellen, other Board members and regional Fed presidents weighed in with a generally hawkish bias. Bullard remarked that a hike in September was a significant option, Lockhart said there was scope for two hikes in 2016 if the data supported it and Mester remarked that it was important not to fall behind the curve. The most tangible heft would come from Vice Chairman Stanley Fischer’s remarks though when in an interview he answered that Yellen’s speech left the door open to a September hike and two moves this year. Of course, potential is not intent. We have seen the Fed’s forecasts cut down many times before, and that engrained skepticism can easily snap back.

Heading into the new trading week, the market was pricing in a 42 percent probability of a hike next month and a 65 percent chance of a move sometimes this year. That is a significant pick up in hawkishness from recent weeks. Event risk this week can solidify this jump in expectations or it can quickly break it down. A range of Fed speeches and secondary economic readings is on tap. However, the updates with heft are those that reflect upon those ‘statutory goals’ Yellen referred to: the PCE deflator and NFPs. Employment conditions are close to target as-is (even if there are frequent debates as to quality in the metrics). It is inflation where the waters are still low. As the preferred price gauge for the Fed, a jump from the PCE could offer solidity to Dollar performance.

It will difficult to keep the market on pace for US hawkishness and thereby Dollar bullishness. First of all, it will be difficult to weave a fundamental path where the heat keeps rising for rate hike expectations. More systemically, the pull of complacency will be exceptionally strong on skepticism. While the week ahead is active for scheduled event risk, the backdrop for activity is stubbornly quiet. Add to that the anticipation of the Labor Day holiday the first Monday of September, and the perception of a seasonal inhibitor will readily open a crack in any conviction that attempts run more significant resistance for the Dollar.