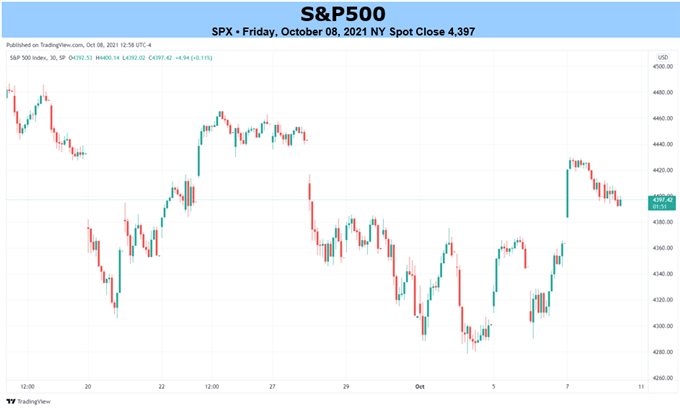 After a rebound at the start of the week, the S&P500 was struggling to find further bullish momentum on Friday despite a softer NFP headline, 194k vs 500k expected. The initial thought process would likely be to think that the odds of the Fed starting to taper its asset purchases in November given fewer jobs were added than expected in the month of November, but alongside the non-farm payrolls the unemployment rate has dropped 0.4 ppts to 4.8%, its lowest reading since the pandemic started to take effect back in April 2020.

Whilst digging deeper into the numbers we find that the participation rate has also dropped in September, 0.1 ppts to 61.6%, which slightly discounts the big beat in unemployment. But its clear that equity markets are unconvinced about the Fed delaying tapering anymore, meaning we could see some further weakness next weak as Asia comes to digest the latest round of jobs data on Sunday night.

I would expect equities to keep a close eye on the earnings season kicking off next week, as soaring energy prices and labor shortages are likely putting a strain on profit margins.

From a technical standpoint, the outlook in the short-term remains pretty weak despite a longer-term bounce expected. The RSI continues to flatten out around the 50 level despite the attempted bullish run earlier on in the week whilst the index is far off from its ascending trendline support.

The DAX, as with other European equities, is likely to remain more sensitive to the developments in energy prices given Russia’s lending hand in regards to the supply of natural gas. We also have the ZEW sentiment survey out on Tuesday, with consensus expecting the weakest reading since March 2020 as ongoing macroeconomic risks unfold. The German CPI for September will be released on Wednesday with expectations of no change month on month, which would play in nicely to the ECB’s rhetoric about transitory inflation and ultra-flexible financing conditions for longer.

The pullback on Wednesday saw the DAX 40 find support at the May lows which is a good sign that buyers are still hanging around at current levels. Whilst the short-term outlook doesn’t look great for new buyers to come in, it’s going to take a stronger attempt from sellers to bring the DAX below 14,500. The gains also look capped above the descending trendline resistance, which is now converging around the 15,000 psychological mark, making it even harder to see a bullish reversal next week.