Last Wednesday’s meeting of the Federal Open Market Committee, which decides on US monetary policy, looks to have ushered in a new era of EUR/USD weakness – seemingly providing confirmation that the FOMC will tighten policy in this cycle well before the European Central Bank’s more dovish rate-setting Governing Council.

The Fed uses a so-called dot plot to signal its expectations of future changes in US interest rates, with each member of the FOMC represented by a single dot. That now points to the Fed raising rates twice by the end of 2023. By contrast, the ECB is still insisting that policy needs to remain loose. Indeed, its Chief Economist Philip Lane insisted just the day after the FOMC meeting that it is still premature and unnecessary to discuss the ending of the Eurozone central bank’s emergency bond-buying program.

From a long-term perspective, this has shifted the outlook for EUR/USD even if the Fed has really signaled only a slightly faster tightening cycle than before, and a new trend lower looks to have begun already. 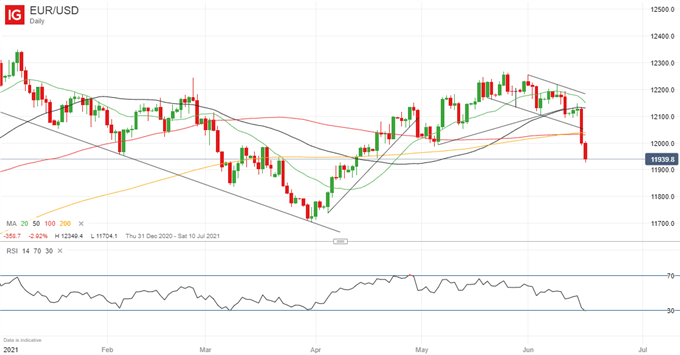 As the chart above shows, the 1.2266 level touched on May 25 now looks to have been a significant high, with the steep falls on Wednesday and Thursday confirming that further losses are on the way. Even in the near term it is not yet clear that the post-Fed selling is over, with the 14-day relative strength index at the bottom of the chart not yet significantly below the 30 mark that points to an oversold asset.

Note too that data on the positioning of traders using IG’s platforms showed a sharp move from short to long not just in the 24 hours before and after the Fed’s announcement but week-on-week too. As listeners to my weekly webinar will know already, at DailyFX we take a contrarian view of retail trader sentiment and these positioning changes are therefore another negative for EUR/USD.

Against this background, inflation figures will remain the focus of attention in the weeks ahead as we wait to see whether it proves “transitory” or persistent – the latter meaning rates will have to rise far more quickly than currently priced in. There are none due from the major EU nations this week but it is a busy week for Eurozone sentiment data, kicking off Tuesday with the flash consumer confidence number for June.

That is followed by flash purchasing managers’ indexes Wednesday, the German Ifo business climate index and French business confidence Thursday, and the GfK measure of German consumer confidence Friday. In addition, a European Council meeting starts Thursday, when EU leaders will meet in Brussels to discuss Covid-19, economic recovery, migration and external relations, including relations with Turkey and Russia.