Equity markets gained ground during Asia-Pacific trade as investors dismissed a notable rise in US inflation data overnight. Australia’s ASX 200 climbed 0.66% on the back of the local consumer sentiment index climbing to an 11-year high. Hong Kong’s Hang Seng Index surged 1.23% and China’s CSI 300 rose 0.71%. Japan’s Nikkei 225 proved to be the laggard, sliding 0.44% as coronavirus infections continued to climb in Osaka.

In FX markets, the cyclically-sensitive Australian and New Zealand Dollars outperformed their major counterparts, while the haven-associated Japanese Yen and US Dollar slipped lower. Gold prices nudged marginally higher as yields on US 10-year Treasuries stabilized at 1.63%. Looking ahead, speeches from several members of the Federal Reserve and ECB President Christine Lagarde headline the economic docket, alongside industrial production figures out of the Euro-area. 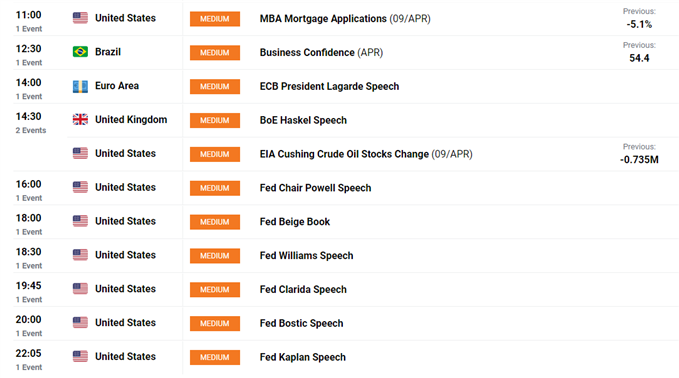 The tech-heavy Nasdaq 100 index may outperform the benchmark Dow Jones in the near term, as the Reflation Trade that saw yields surge higher in recent months pauses for breath.

Although consumer price inflation data released overnight came in hotter than consensus estimates, at 2.6% (exp. 2.5%), this failed to concern market participants who appeared to have priced in a more aggressive print.

Indeed, US 10-year Treasury yields slipped lower immediately after the release. Strong demand for longer-term Treasuries at the 30-year auction also accelerated the decline in rates of return, with the bid-to-cover ratio – a measure of demand – coming in well above average.

This dynamic will likely pave the way for the duration trade to gain favour once again, with the tech-heavy Nasdaq 100 probably leading US benchmark indices higher in the coming weeks. 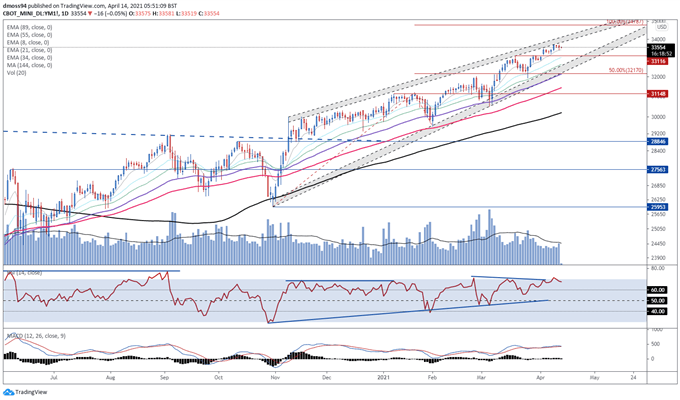 From a technical perspective, the Dow Jones’s outlook appears somewhat bearish as prices struggle to penetrate psychological resistance at 33,700.

Below average volume, in tandem with the RSI sliding back into normal territory, suggest that bullish momentum is fading.

A daily close back below the 8-EMA (33439) could intensify near-term selling pressure and generate a pullback to former resistance-turned-support at the March high (33134).

Alternatively, a push above the monthly high (33712) to fresh record highs would likely signal the resumption of the primary uptrend and bring the 33400 mark into play. 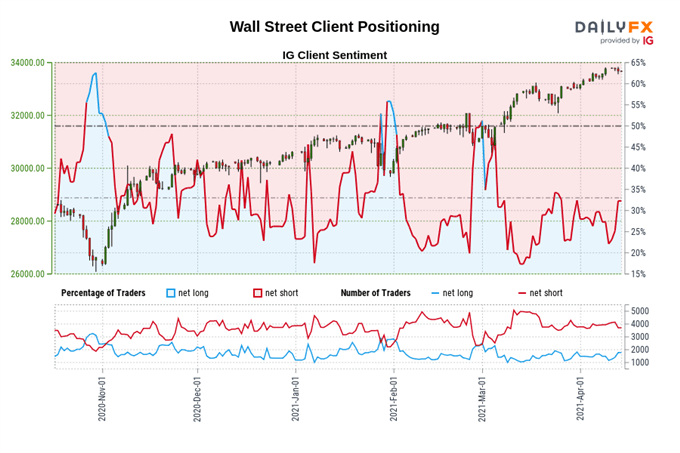 Yet traders are less net-short than yesterday and compared with last week. Recent changes in sentiment warn that the current Wall Street price trend may soon reverse lower despite the fact traders remain net-short. 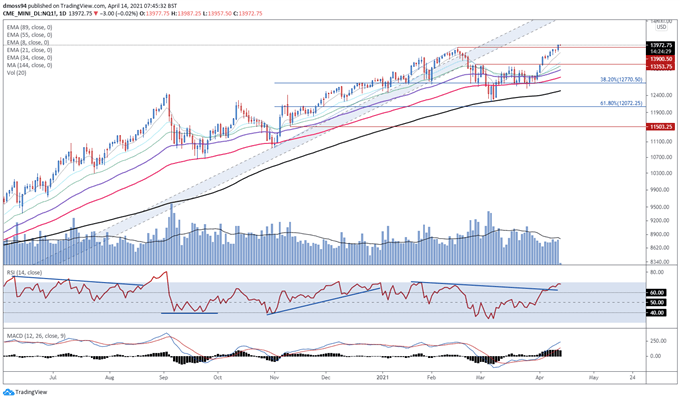 The Nasdaq, on the other hand, seems poised to extend its push to fresh record highs as prices slice easily through February high (13900) resistance.

With the MACD surging to its highest levels since late-February, and the RSI eyeing a push into overbought conditions, the path of least resistance appears skewed to the upside.

Remaining constructively positioned above 13900 suggests that the Nasdaq will continue climbing higher in the near term, with the 78.6% Fibonacci expansion (14530) the next key level of resistance.