US Recession Fears Fade Ahead of December Fed Meeting

In the prior entry in the US Recession Watch series, we concluded that “a look at price action over recent weeks suggests that many of the concerns from the summer months have evaporated.

“With a potential US-China trade deal appeared on the horizon, traders were keen to jettison safe haven assets like the Japanese Yen and US Treasuries (pushing yields higher – more on that below) and bid up higher risk assets like equities.”

This trend continued in November and there are few signs that recession fears will rise again in the near-term. It would seem that only a deflation of the US-China trade war Phase 1 talks would prove to be a catalyst for a rebound in recession fears.

Over the course of November, US economic data improved relative to analysts’ expectations. The Citi Economic Surprise Index for the US improved from 4.7 at the end of October to 13.1 by the end of November. Given that data outperformed and growth expectations rebounded suggests that fears of a US and a global recession are continuing to fade – as was noted in the November US recession watch update. 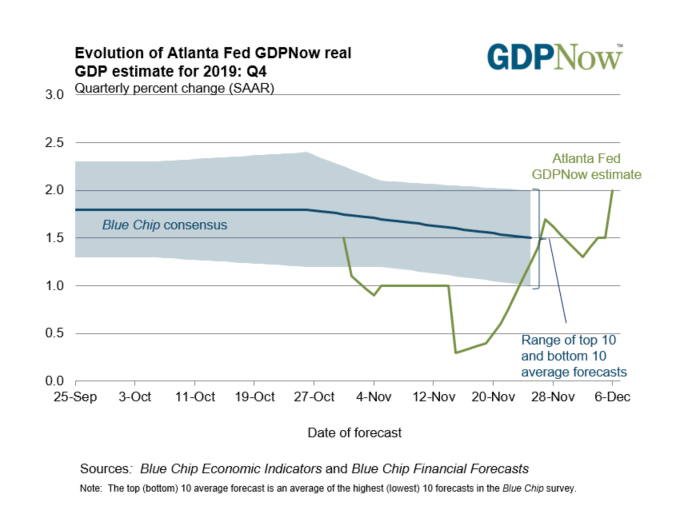 With US economic data momentum improving, US growth expectations have perked up in recent weeks. Based on the data received thus far about Q4’19, the Atlanta Fed GDPNow forecast is looking for growth at 2%. Q4’19 US GDP expectations have ranged between 0.3-2.0% since tracking began at the end of October. The next update to the Q4’19 forecast will be released after the November US retail sales data on December 13. 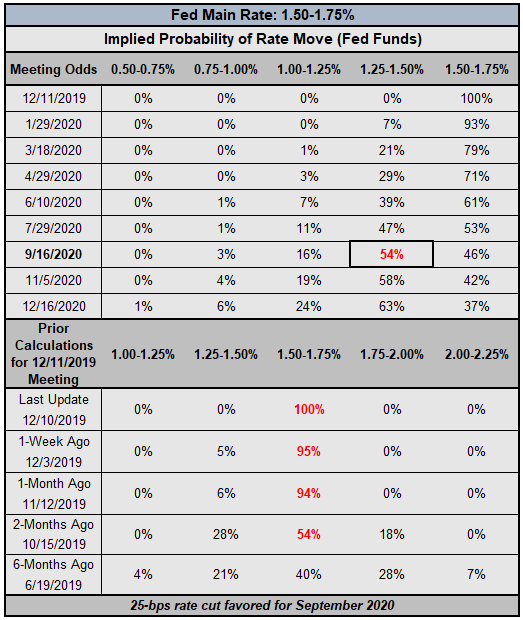 According to Fed funds futures, the timing of the next interest rate cut remains depressed as it has been since early-November. Last week, rates markets have been discounting July 2020 as the most likely period for the next Fed rate cut; now, September 2020 is favored (54% implied probability).

Even as Fed interest rate cut odds have remained depressed – and US Treasury yields have edged higher – the US Dollar (via the DXY Index) has continued to struggle in December, still down versus every major currency month-to-date.

The US Treasury yield curve continues to twist and steepen. Long-end yields are pusing higher relative to where they were one-week ago, but short-end yields have fallen.

The relatively faster rise by long-end yields compared to short-end yields may be seen as a sign that market participants don’t believe that the US will fall into recession soon; long-end yields are viewed as a proxy for growth and inflation expectations.

This twisting US yield curve is not quite giving a raving assessment of US growth prospects, though; indeed, the Atlanta Fed Q4’19 GDPNow US growth forecast has just moved back to 2%. 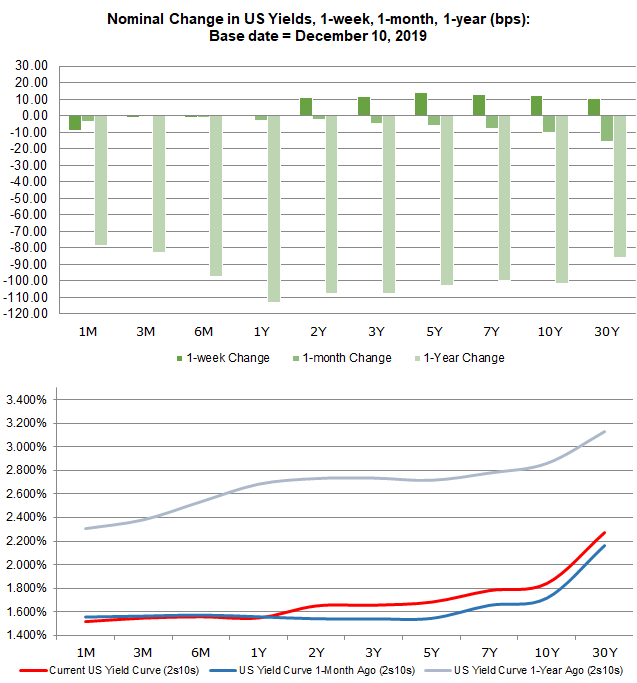 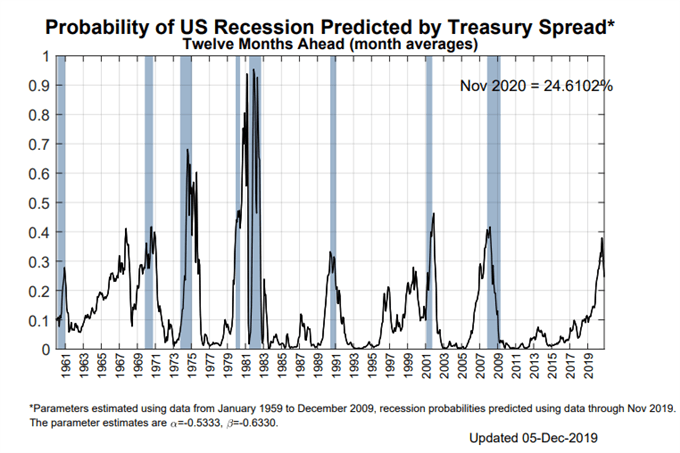 To this end, the signal for a US recession is fading: the 3m10s spread moved out of inversion territory in October and has remained in positive territory ever since. Using the 3m10s spread, the NY Fed Recession Probability Indicator is now suggesting a 25% chance of a recession hitting the US economy within the next 12-months – down from the 35% chance seen at the start of October.

The last time the 3m10s spread was at least 31.7-bps was during the first week of March 2019. Accordingly, backing out this assumption, the NY Fed Recession Probability Indicator would be discounting around a 15% chance of a recession hitting the US economy in the next 12-months if the indicator were updated in real-time. Traders should expect US recession concerns to continue to fade for the time being.