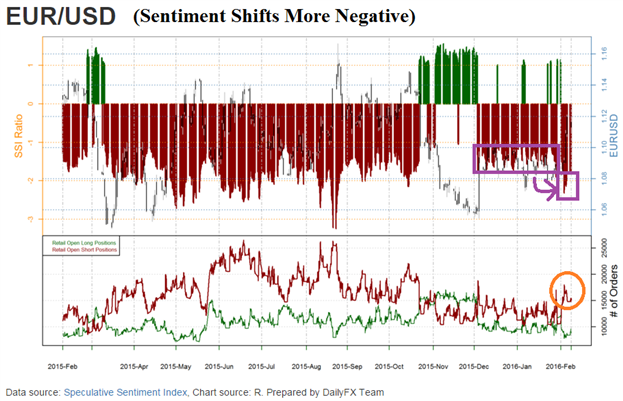 -Volume expands on the breakout, though On Balance Volume is not above the December 2015 highs (mixed signal)

-1.08 is the key level to the bullish Elliott Wave pattern

The break higher last week was significant for the technical pattern on EUR/USD. The break above 1.1087 now solidifies a 3 wave move from August 24, 2015 to December 3, 2015. For those familiar with Elliott Wave analysis, 3 wave moves are corrective moves and suggest a future retracement. Below, we will inspect more closely the favored bullish pattern and favored bearish pattern including levels to watch out for.

As we write, we are favoring the bullish pattern as Sentiment has shifted more deeply towards the bears. You can see on the chart below how the red area chart has shifted to lower levels (purple boxes) as the number of traders positioned on the short side has grown (orange circle). At the time of this writing, SSI is at -1.76. Sentiment is a contrarian signal that suggests the higher probability move is for more gains.

(See how traders are positioned with our live SSI feed.)

Volume in EUR/USD is more mixed. The On Balance Volume indicator has only risen to levels that coincided with the early December 2015 high. This is coming at a time when price has clearly broken higher. Fortunately, the price break higher did occur on expanding volume. Ideally, we would like to see the OBV expand to new highs as price is making new monthly highs. If the bullish pattern is at play, we should see volume continue to expand on additional price moves higher.

EUR/USD Trading Volume Increasing, but Not Confirming Breakout Yet 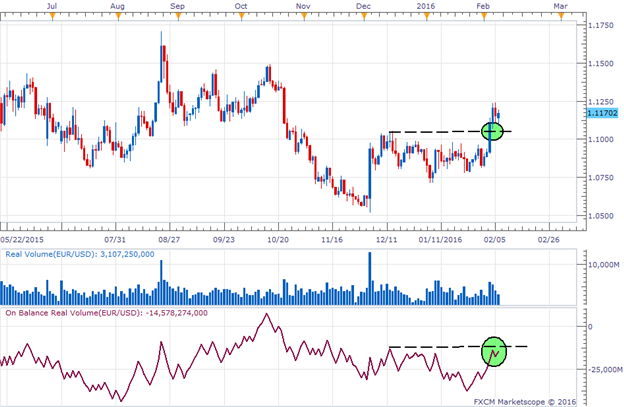 As indicated above, the bullish pattern is the favored pattern as we see Sentiment shift more deeply towards bears. The Elliott Wave pattern we are following for bulls is a large flat pattern that began on March 16, 2015. A flat pattern subdivides as an A-B-C (3-3-5) pattern. With waves A-B finished, that means we are near the halfway point of wave C. Flat patterns tend to be shallow retracements that eat up more time than price. The target on wave C would be the August 2015 high of 1.1720. The measurements of the sub waves in “C” will guide on fine tuning the target further. 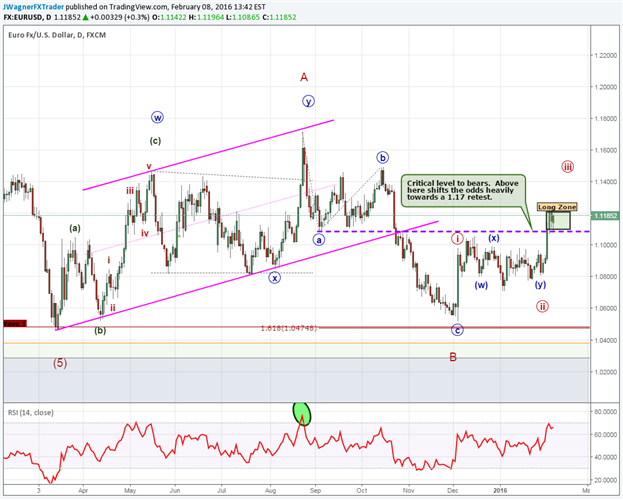 If volume doesn’t expand or if SSI begins to grow, then we start elevating the bearish wave picture noted below.

If prices do break down and fall apart, the elevated bearish pattern is that of a bearish ending diagonal. Considering the location of the 3 wave move from August 2015 to December 2015, it is possible this could be the first wave of an ending diagonal. That means we would look for a 3 wave move higher beginning December 3, 2015 to terminate below 1.1720 and likely in the 1.1250-1.1400 price zone. This move higher would then make up wave 2 of the ending diagonal leaving waves 3,4,5 to come.

Since we are early in this pattern (just finishing wave 2), the ending diagonal will be much more difficult to catch in real time. A price break below 1.08 may provide an early warning signal that more weight would need to be given to this scenario.

Since 1.1087 was the previous point of break higher, the better risk to reward ratio trade would be a long position near this level. Many times when a level is broken, the market comes back to retest that level. Earlier today, EUR/USD traded as low as 1.1087 which is common. So far, the patterns are displaying bullish clues.

Regardless of your method to determine trade entry, consider this one simple risk management technique that when implemented, saw 53% of traders turn a profit and of those who didn’t, only 17% turned a profit. Pages 7-9 of this 26 page guide on Traits of Successful Traders details the technique and how to integrate it. [Free registration required]