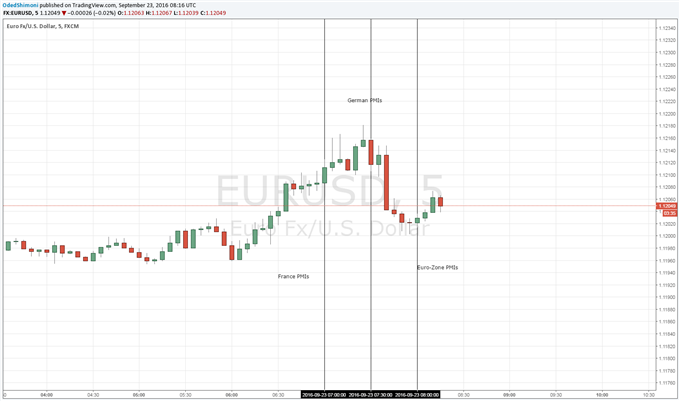 - EUR/USD was little changed on the news

Learn about the proper tenets of risk management with the “Traits of Successful Traders” series.

The Euro was little changed versus the US Dollar (at the time this report was written) after today’s Flash Markit Eurozone PMIs printed mixed readings.

The Services PMI Activity Index printed 52.1 (21-month low), below the prior and expected 52.8 print.

The Euro-Zone reading came after earlier today the German Markit PMI figures showed a similar pattern to the Euro-Zone numbers, marking a rise in manufacturing but a decline in services, while the France figures beat expectations on all fronts.

According to Markit, a robust increase in France’s service sector activity offset the ongoing stagnation in the nation’s manufacturing sector, which led the French Composite PMI to rise above its German counterpart for the first time in over four years

A reading of less than 50 indicates a contraction of activity, above 50 points to an expansion, and an index of 50 says that no change has occurred.

Looking into the report, Markit remarked that it remains clear that the economic upturn is still fragile, inflationary pressures also are still relatively benign and business confidence at the service sector has declined significantly. In turn, Markit suggested that the door remains open for policymakers to provide further policy support this year.

The EUR/USD seemed to have reacted to the France reading with a slight rise on London open, followed by a decline on the German figures, while reaction to the Euro-Zone numbers was subdued, perhaps due to the prior two readings already indicating the general theme for the report.

Meanwhile, the DailyFX Speculative Sentiment Index (SSI) is showing that about 44.0% of traders are long the EUR/USD at the time of writing.