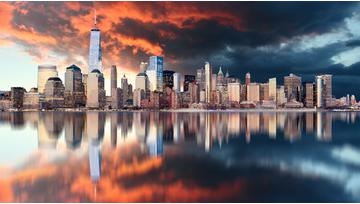 DXY (USD) is Working on a Key Support Zone - Will Bulls Respond?

- The U.S. Dollar is a tale of two trends: The Longer-term trend remains bullish, but bearish price action has dominated DXY & USD throughout 2017 thus far.

- The Dollar has shown bullish signs since last week’s rate hike, and this is in direct converse of the bearish move in DXY after the March rate hike. Did something change here that can drive a lasting move of strength in the Greenback?

Over the past week, we’ve looked at the U.S. Dollar from a variety of angles. With the Greenback setting a fresh 7-month low just ahead of last week’s FOMC rate hike, bullish price action has begun to show after the Fed delivered a more-hawkish outlay than what markets were looking for. Whereas we’d previously heard the idea that the Fed may be looking to tighten through balance sheet reduction after one more hike, last week’s meeting showed that the Fed was looking at four hikes going out to the end of next year; and as Chair Yellen shared during the press conference, these hikes could take place along with the balance sheet reduction plan that the Fed had previously shared. This would be the Federal Reserve tightening the money supply on two fronts simultaneously.

It’s been a rough 2017 for the Greenback, so far. After running up to a fresh 14-year high on the second trading day of the New Year, the Dollar has put in a string of losses that’s seen as much as a -7.22% taken-out. On the chart below, we’re looking at the bearish channel that’s developed in DXY in 2017 after last year’s bullish top-side run.

The consistency with this year’s bearish move in the Dollar has many looking for a deeper sell-off; and while this certainly may be in the cards, a bit of longer-term perspective can highlight how the Greenback is still rather elevated after the bullish run of 2014. On the chart below, we’re looking at DXY going back to the year 2000, and this helps to show how resistance had formed around the 61.8% Fibonacci retracement of the move after the 50% retracement had helped to set swing-low support on the night of the U.S. Presidential election.

The election night spike-low came in right around the 50% retracement of that move, and as we came-in to the March rate hike from the Fed, which was largely expected and widely-telegraphed, DXY ran-up for a quick resistance check at the 61.8% retracement before peeling-lower after the Fed announced the move. Something happened in March that DXY and Dollar bulls did not like, and perhaps not coincidentally, this is around the time that the Fed started talking-up the prospect of balance sheet reduction. This rate hike in March triggered another three months of weakness in DXY as we walked into last week’s rate hike.

Just ahead of last week’s rate hike, markets got a couple of pieces of fairly bad U.S. data as both inflation and retail sales prints missed estimates. Retail sales even showed a contraction of .3%, and this was just another reason for bears to make another push ahead of the Fed’s rate decision, and DXY set a new low just hours ahead of the Federal Reserve’s announcement. But after that announcement, we’ve seen bullish price action begin to show as higher-highs have been accompanied by higher-lows as bulls come-in to offer support; leading to the possibility of a bullish reversal of the 2017 move in the U.S. Dollar. On the hourly chart below, we’re getting a bit more in-depth with near-term price action in DXY.

Within that above chart is a key level that can be found around the 97.50 area. This is a level that’s come-in multiple times as resistance and has recently begun to show some form of support. This zone had showed as resistance as recently as last week, and it appears that buyers are continuing with some element of support around this price after the DXY retracement that started on Tuesday.

The big question for DXY is whether we’re at the point where the longer-term bullish trend may take-over the 2017 bearish run. Was last week’s FOMC rate decision a game-changer? Given the Fed’s stance around balance sheet reduction and the more hawkish-outlay towards future rate hike expectations, there can certainly be continuation potential of this bullish USD/DXY theme.

Timing this theme can be helped by applying a Fibonacci retracement to the recent bullish move. By doing so, we’ll see that current price action is finding support around the 23.6% retracement of that move. If bulls are able to launch-higher from here, this would be a very bullish quality for the prospect of topside continuation. But as long as support remains above the 50% marker of this move, which also syncs fairly well with the prior swing-low at 97.04, traders can look to bullish continuation approaches in the Greenback.