Recessions and depressions both describe economic downturns that can have a devastating impact on individuals, businesses and markets. But there are key differences in how these economic downturns impact trading. What might happen to global GDP following the coronavirus pandemic? Read on to find out.

What defines a recession?

A recession is generally defined by two consecutive quarters of contracting GDP. This manifests itself as a period of suppressed economic activity in the business cycle with contractions across a range of metrics such as retail sales, manufacturing, employment and more. Recessions are usually accompanied by a decline in the value of a range of assets from selected stocks to industrial commodities.

Recessions are an inevitable occurrence in the business cycle, which moves in peaks and troughs.Expanding economies may see strong industrial output, increasing employment, and upward pressure on prices, reaching a peak. The recessionary stage is represented by the following period of correction, from the peak to the trough, before the recovery begins and the cycle starts anew.

The three most recent recessions in the US are the financial crisis of 2008 or Great Recession, the dotcom bust of 2001, and the 1990-1991 recession caused by a range of factors including raised interest rates, an oil price shock and growing consumer pessimism. For more, see our piece on the history of financial bubbles. 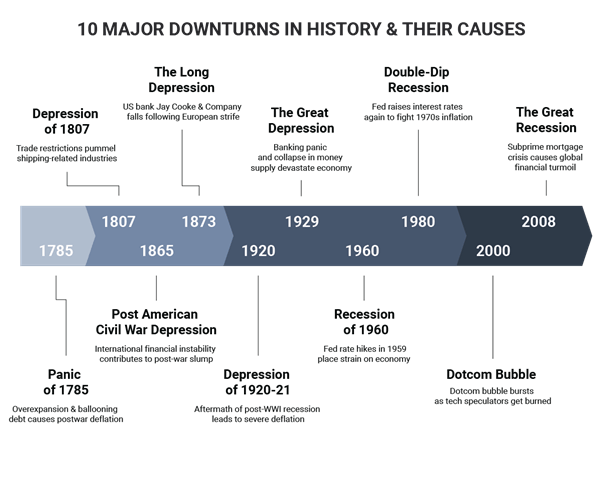 Find out more with our background article What is a Recession? and also discover how to invest during a recession.

What defines a depression?

A depression is less well-defined given how rare the event is, but is usually taken to mean a period of extreme economic contraction that lasts many years as opposed to months. For example, the Great Depression was the only recognized depression of the last 100 years, consisting of two large economic contractions starting from 1929 and lasting until the start of World War II.

Top differences between a recession and a depression

The main difference between a recession and a depression is the length of time it lasts, but the fact that a depression continues for so much longer inevitably means the impact will be deeper. This in turn will affect factors like unemployment rates, potential stock market and other asset falls, and of course, the degree of GDP decline.

To show the main differences, here’s a table comparing the Great Depression, beginning in 1929, to the 2008 financial crisis, often referred to as the ‘Great Recession’.

Positives and negatives of recessions and depressions

There can be positive market outcomes alongside negative ones during recessions and depressions, despite most of the media attention being on the detriments of such events. As mentioned, economic contraction will mean job losses, subdued or declined performance in sectors such as retail and manufacturing in particular, and often a considerable amount of value wiped off share prices.

However, on the positive side, companies in certain sectors can do very well, others are forced to become more efficient, reduced inflation can balance everyday costs for individuals, and a newly-necessary austere mindset can help people manage money better.

Positive: Some businesses will do fine - and others will become more efficient

During economic contractions, while ‘growth’ sectors such as consumer tech may see companies take a hit to revenues, industries that provide for life’s essentials will usually do less badly, often in terms of share price as well as sales. Sectors generally recognized to be more resilient to recessions include consumer staples, healthcare and utilities companies, as well as more budget hospitality options.

The below chart demonstrates how some of these sectors fared during the Great Recession in relation to the S&P 500. 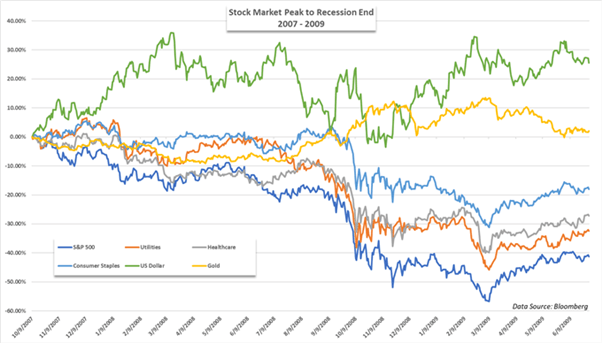 Other businesses may be forced to adapt or die, making it necessary for them to drive efficiencies. Companies that in more stable economic times could get away with bloated overheads and excess inventory are forced to streamline and reassess their operations to retain their customer base.

Recessions are usually accompanied by a decrease in inflation as industries react to consumers’ lower spending power. This resets costs to a more manageable level – a situation that wouldn’t be possible if the dips were removed from the business cycle. Also, economic contractions can encourage people to save more money and structure their personal finances better; it’s typical that savings rates increase during economic downturns

Are we headed towards a depression or recession?

The question of whether we are headed for depression or recession has been a popular one since the coronavirus outbreak caused an extreme economic slowdown throughout much of the world. As of May 21, 2020 major economies such as Germany, Japan and France had already officially entered recession. In the US, unemployment statistics rose as high as 15% by May 2020, and economists at banks have predicted a drop of more than 30% in US GDP in April-June.

Even Australia, known for having the longest uninterrupted economic growth in history, had to contend with the prospect of recession as demand for its key exports slumped. In the UK in May, Chancellor Rishi Sunak predicted a recession ‘The likes of which we’ve never seen’; the Bank of England is calling the coronavirus pandemic the worst economic episode since 1706.

While it’s clear that economies face severe economic hardship, the question remains just how bad it can get. Does Sunak’s contention equate to depression for any developed economies? The IMF in April cited a ‘high likelihood’ of ‘the worst recession since the Great Depression’ for the global economy, with a projection for global growth in 2020 to fall to -3%.

However, the same month Goldman Sachs predicted a strong recovery in the latter part of 2020 after a devastating initial slump, suggesting that the economic damage would tend towards recession rather than depression territory.

However long the upcoming downturn lasts, preparation is key, at least to the best of one’s abilities. What are the strategies that market practitioners use to navigate recessions? Make sure you check out our article How to Invest During a Recession for the lowdown by our stocks analyst Peter Hanks.

Looking to enter the equities market? We have a range of articles that may provide the necessary information to get started.