What is Silver? Understanding Silver as a Trader’s Commodity 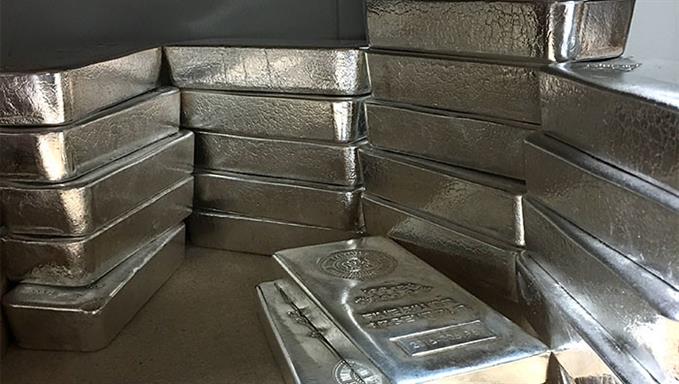 Silver is a highly sought-after commodity with widespread utility in jewelry and electronics. While not as scarce or as coveted as gold, it is still considered one of the most valuable metals in the world, and one of the most traded commodities. In this article, discover what silver is used for, the history of the market and how it works, and what affects silver prices.

What is silver and what is it used for?

Silver is a precious metal used in jewelry, with industrial applications in silverware and electronics. Investors can buy silver in bars, coins and bullion, or speculate on the spot price of silver. Although its chemical symbol is Ag, on financial markets it is known under its currency exchange symbol, XAG.

The latest silver charts can be used an indicator of economic health, and the live silver price can help predict the price movements of a range of financial markets, including major commodities, currency pairs and stocks.

History of silver as an asset class

Silver’s history as an asset class can be traced back thousands of years, to the first recorded mining activity in 3,000 BC. As its popularity increased, mining operations spread across the world and silver’s uses and value multiplied. By the end of the 19th century, 120 million troy ounces a year were being produced to meet demand for the precious metal.

The live silver price wasn’t recorded until the 1970s, when it was introduced at a starting price of $1.80 per troy ounce. Silver’s value rose to $36 in the early 1980s, but soon fell back to below $10, where it stayed for more than two decades. The silver market next reached a significant high point during the financial crisis of 2008, when its price almost doubled to $20 – but it again fell back shortly after. The highest historical price of silver was a rally to nearly $50 per ounce in 2011.

The below chart shows silver’s price movements during a particularly turbulent few years following the financial crisis of 2008. 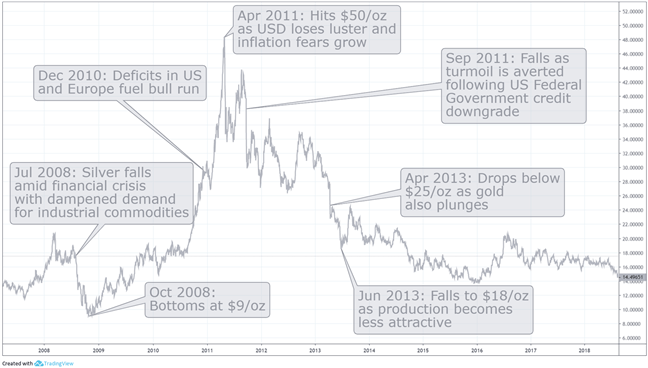 The major factors that affect silver prices include supply and demand, global economics, and the gold-silver ratio.

Supply and demand, as with all commodities, is a major influence on the price of silver. An average of 27,000 tons of silver are extracted worldwide each year, with China, Mexico and Peru leading the way in terms of production. Large importing nations like the US, UK and India can demand up to 29,000 tons of silver per year. Any perceived increase, decrease or imbalance can cause movement in silver markets.

A large part of the demand for silver comes from its expanding industrial applications. Silver has the highest electrical conductivity of any metal, and therefore has become a key component in sustainable infrastructures, such as solar panels. The metal also has numerous applications in the medical sector.

The silver price is also influenced by global economics. In periods of economic strength, silver prices can rise as people consume more electronics, jewelry, and buy more cars that have silver components. However, periods of economic and political crisis can also see the price of silver rise, as it is used as a ‘cheaper’ safe haven alternative.

The gold-silver ratio is the weight in ounces of silver needed to purchase one ounce of gold. In mid-2019 the gold-silver ratio hit 90, meaning you would need 90 ounces of silver to buy one ounce of gold. This means silver was trading at a long-time high discount compared to gold. When the ratio is this high, silver is generally favored as it is cheap relative to gold. A lower ratio will often favour gold, and a common decision is to trade silver for gold as the ratio drops.

Silver’s inverse relationship with the US Dollar makes it a popular hedge against inflation – as the price of paper currencies decline, investing in silver can protect against these losses because it retains its value. However, this also means that a strong US Dollar can put downward pressure on the price of silver.

The below chart shows this inverse relationship between the US Dollar Index and silver. 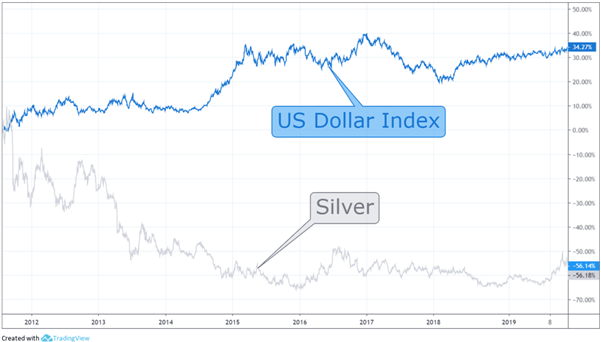 How can silver be traded?

Silver can be traded in a variety of ways, from purchasing the metal as a physical asset, through to futures and options in the commodities market, to exchange-traded funds (ETFs). Where permitted, traders can also use CFD trading and spread betting to speculate on whether the value of silver will go up or down.

Read more on how to trade silver, and learn the strategies that can help you trade this asset more consistently.

Silver is a popular commodity to trade because it allows traders to:

Further reading on silver and commodities

Follow the live silver price using our interactive chart and don’t forget to bookmark DailyFX for all the latest silver and commodities news and analysis.