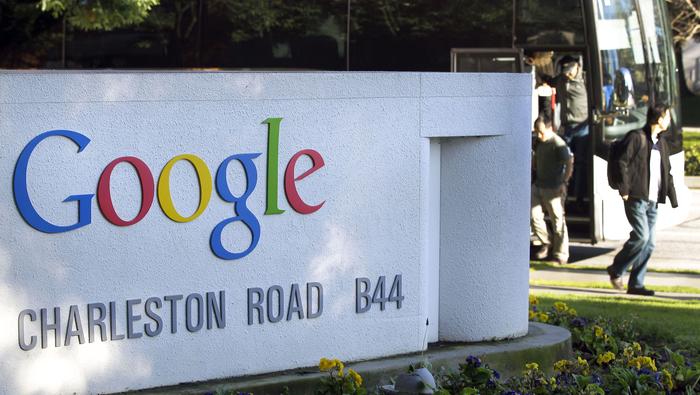 Will Google Earnings Cut Down S&P 500 Recovery and How Serious is the Event Risk Ahead?

Google Tumble Afterhours May Cut Down an Uneven Risk Run

Though momentum has been light and there remains little-to-no fundamental support behind the bounce in risk-leaning assets through the first half of the this week, the charge has made its impression. Bull trends frequently begin as a mere expectation for a bear-market bounce and evolved from there. Yet, the gravity-defying advance seems to have hit an unmistakable fundamental snap this past session. Where the market managed to ride through an extended slump in home prices and drop in the Conference Board’s consumer sentiment survey, the unexpected miss in Google earnings after the New York close shakes a speculative pillar. The FAANG member and fourth largest market cap stock reported a $1.06 EPS (earnings per share) against the analyst consensus for a $1.25 with similar miss on $69.9 billion in revenue (against $71.0 billion expected). The market result was clear with GOOG shares dropping 6 percent in afterhours trade. The critical question for me now is whether the market will consider the performance of this particular stock to stand as a reflection of the market at large? 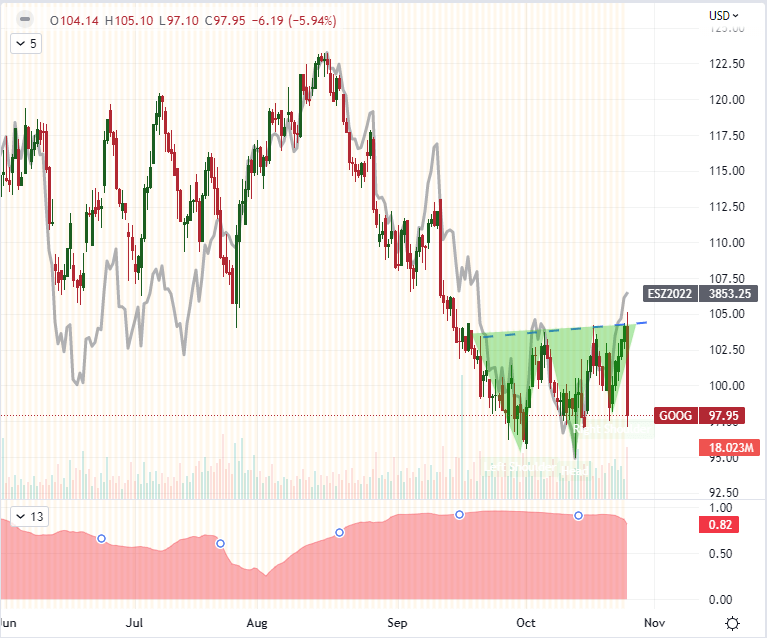 In terms of the market’s overall performance thus far this week, we have made some significant technical progress for the S&P 500 as a benchmark. The charge through 3,800 represents a technical break that could feed into a cycle of assumed follow through. That said, this index is once again statistically ‘stretched’ if we use the three-day rate of change as a metric. The ‘bear market bounces’ of the 2022 usually peter out when this period hits the 5 percent market. It is possible that ‘this time can be different’ should the fundamentals genuinely improve or speculative appetite really benefit from complacency. There is still serious anticipation for the event risk moving forward (more FAANG earnings, US GDP, PCE deflator, next week’s FOMC decision, etc), but the good will during quiet conditions has been breached. The inverse head-and-shoulders pattern from GOOG has broken down rather than complete the traditional structure. Perhaps Apple’s results can stabilize the tech sector perspective, but that isn’t an opportunity until Thursday after the close. 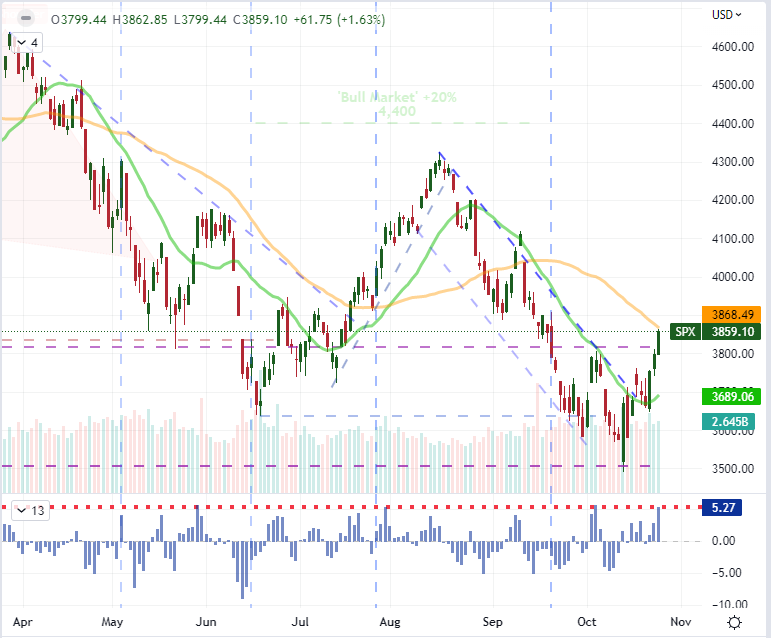 The Dollar is Slipping but USDJPY and USDCNH Continue to Suffer

As US equities leads a broader mix of risk assets higher, there has been a conspicuous pullback from the safe haven US Dollar. It wouldn’t stand out as a full collapse from multi-decade highs from the world’s most liquid currency, but there is technical relevance to the break. We can see that move translate into key pairs like EURUSD (breaking 0.9900 and moving to parity) and GBPUSD (which is also catering to confidence born from the government formation), but the same degree of intent is distinctly absent for the USDJPY. This pair has turned into a macro lightning rod with the charge to 32 year highs and the very public failure by the Japanese Ministry of Finance and Bank of Japan to intervene on behalf of the struggling Yen. Even though the Dollar has slipped and Japanese authorities supposedly attempted a $30-37 billion intervention in the thin liquidity of Friday, USDJPY is still refusing to capitulate. That is problematic for those attempting to steer this cross away from fundamentals. 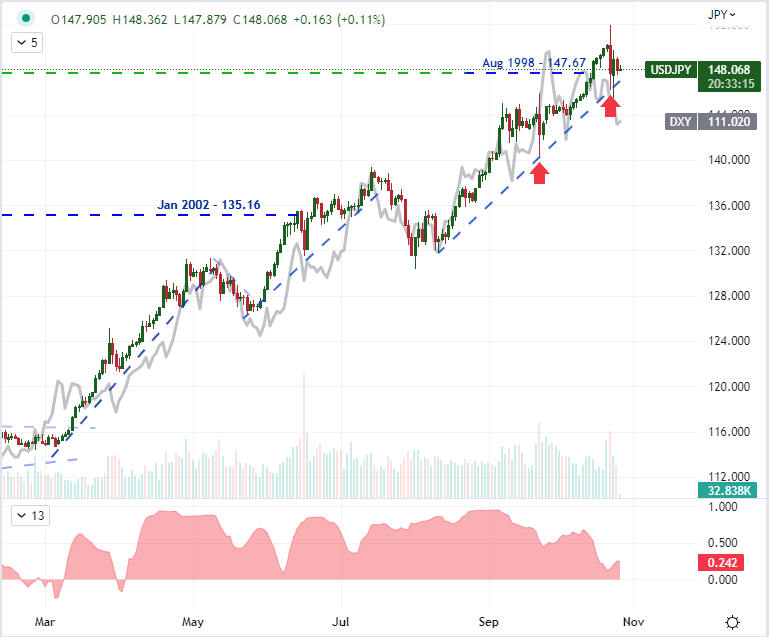 While USDJPY remains one of the most interesting macro pictures for me moving forward, it isn’t the only oddity in the most liquid currents of the financial system. Another critical outlier remains the USDCNH. The Dollar to Chinese Yuan exchange rate has refused to meaningfully retreat from highs above 7.30 which are unprecedented since early 2008 when we were still using indicative pricing for the offshore currency. This could very well be a disparity by design – or, more charitably ‘allowance’ – as a means to combat US sanctions with cheaper Chinese exports. Yet, it is unlikely that there is much desire by local officials to see capital market assets continue to seriously struggle. Yet, that is what is happening both for the foreign traded ETFs like the FXI but also the Shanghai Composite itself. 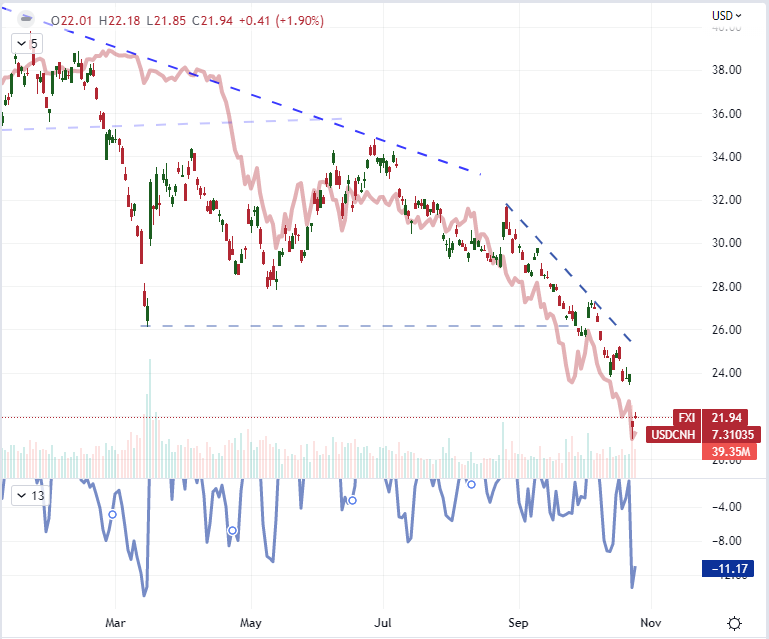 Event Risk Is Going to Get Heavier, Starting with the BOC Rate Decision

As we move into Wednesday trade, it is important to keep track of market priority. The general concerns around matters like recession risks are of constant concern for me, but they may not be a pressing issue for the broader speculative rank. Looking out over the coming 48 hours, it is important to prioritize what is due for release. For example, my expectations for Meta (nee Facebook) earnings after the close is seriously dampened given that Apple will be reporting the day after. US data is important, but it is simply overridden for impact potential given the scheduled 3Q GDP release Thursday. Could this data generate some unexpected shockwaves that possible leads to an unforeseen trend? Certainly. But it isn’t something that seems practical to assume is coming. 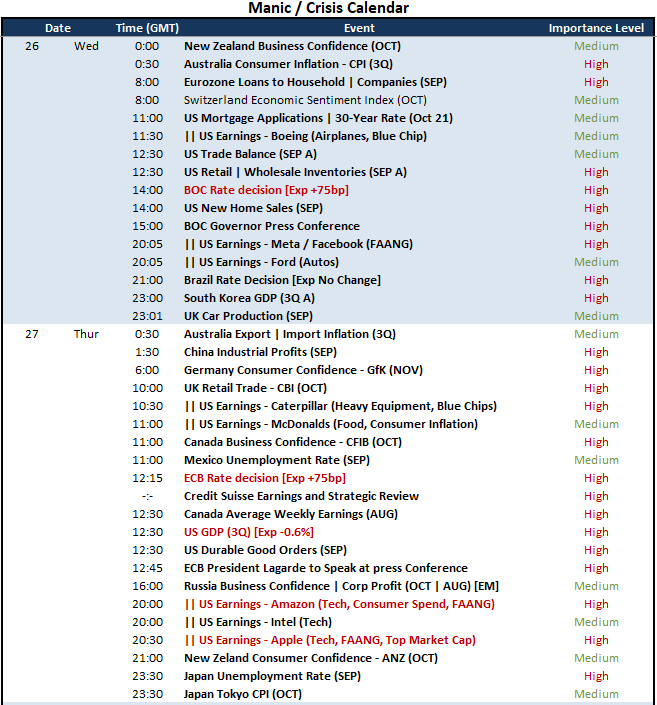 The top listing on my radar for Wednesday will be the Bank of Canada (BOC) rate decision. Big picture, this is one of the more hawkish central banks of the majors which will draw a greater contrast to the Bank of Japan’s dovish floundering. With an expected 75bp rate hike, this would be an impressive hawkish development; but the implications for the likes USDCAD will be curbed by the outlook for something similar from the FOMC next week. The smaller the relative monetary policy gap forecast is between currencies, the more a burden it can be in leading to significant development on this fundamental line. Yet, that same perspective of contrast may lead to a more responsive CADJPY response. The cross is still highly correlated to the yield differential, so course could matter significantly here. 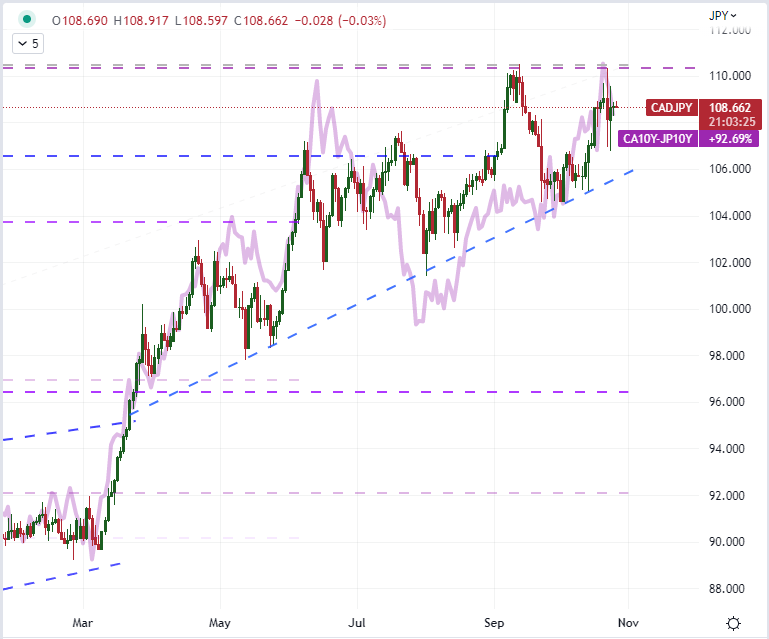