From a technical perspective, USDJPY looks provocative. The failed attempts to halt the pair’s climb through September and October (through active intervention on part of the Japanese authorities) pushed the benchmark all the way up to 150. With a large upper wick and ultimate reversal, volatility behind the pair was amplified dramatically. That volatility has carried over into November with the particular release of the November US CPI report which finally offered the Yen some traction with the pair breaking back below the 150 mark. That was a significant step towards a meaningful reversal, but progress from that point has been noticeably anemic – if not altogether absent. The reasoning is likely more fundamental than it is technical. While I am watching the rough midpoint of the past six months and trendline support back to April, driving the low yielding Yen significantly higher against a still-increasing US interest rate is difficult for larger market participants to get behind. Perhaps we will be reminded of this imbalance later in Wednesday trade. 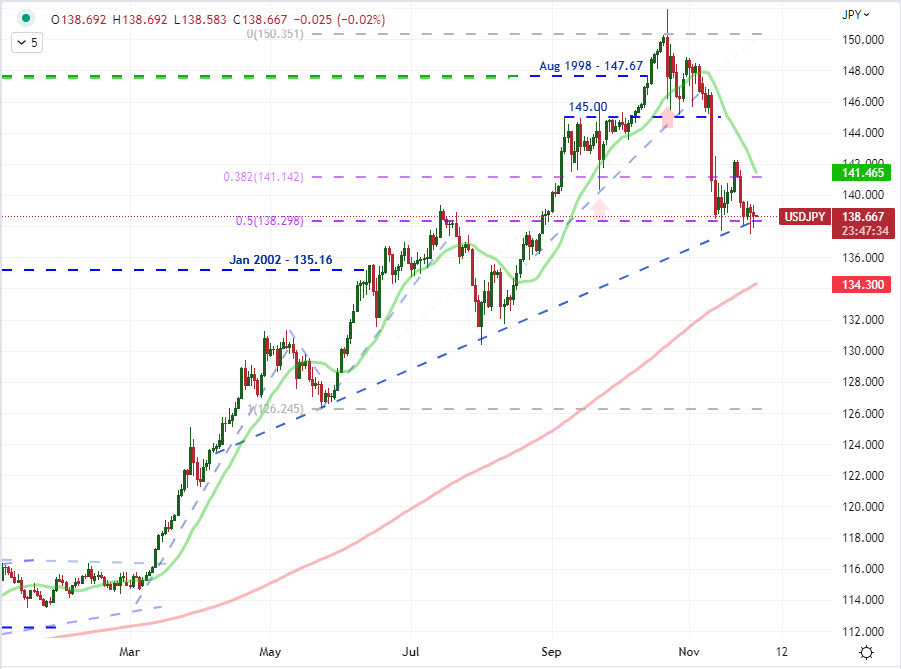 While there are a few significant fundamental factors that feature behind the US and Japanese currency cross, I believe most have been deprecated given the level of the exchange rate and the balance of the fundamental backdrop. From the traditional ‘risk on / risk off’ relationship, the Dollar may be the carry currency in this dynamic, but the Yen has hardly aligned itself to the safe haven (‘funding currency’) role. I believe the Yen is less a genuine safe haven and it instead benefits the repatriation of Japanese carry trade exposure in risk-off periods. Recent correlations of USDJPY to the Dow and Nikkei 225 suggest the Greenback is being treated more as the haven than its counterpart. For relative economic potential, the outlook with all its risks seems to be more or less in balance with neither looking particularly well positioned to generate strong growth. That leaves monetary policy. And, these two currencies are on the opposite ends of the spectrum. The Fed is arguably one of the most hawkish major groups while the Bank of Japan (BOJ) is the most dovish with its commitment to ‘yield curve control’. Yet, the BOJ outlook is anchored is extreme dovishness, while the Fed’s projections are open to speculation as markets attempt to assess how aggressive the hikes will be going forward.

If the attention is principally on the Dollar and the alternative fundamental influences will struggle to distract, this upcoming session’s docket should be monitored closely – and further through the rest of the week. In the upcoming US trading session, Fed Chairman Jerome Powell is set to speak. This is the last of the scheduled speeches he is set for before his press conference following the December 14th rate decision due to the self-imposed media blackout before policy deliberations. This creates a strategic need for the central bank to direct expectations so that markets are not significantly more dovish or hawkish than what the Fed is likely to proffer. Otherwise, the result is volatility that can be disruptive to the financial system. If Powell sticks to his warnings that the path forward for rates is higher than previously expected, the potential for USDJPY to make its way back up and re-converge with the larger bull trend will be stronger. At the moment, retail FX traders at IG are as close to being net bullish on USDJPY since January. 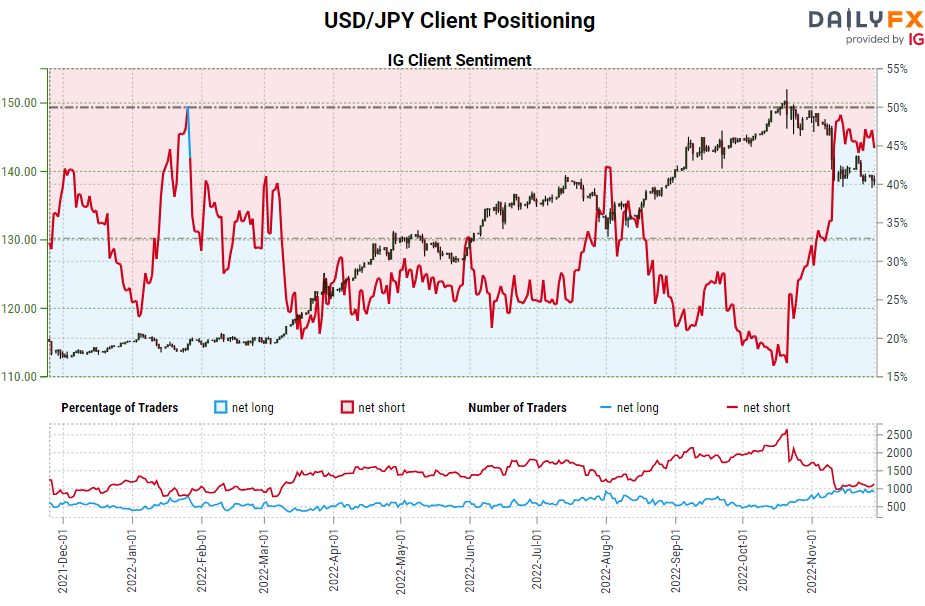