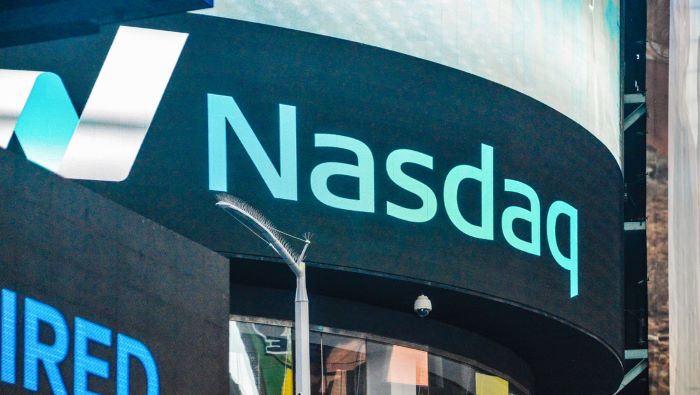 US Equities Sell-off: SPX, Nasdaq and Dow Hint at a Lower Open

US Equity Futures Point to a Lower Open for Stocks

Yesterday’s US retail sales data for December plummeted to its lowest month on month print in a year while PPI data showed further encouraging signs that inflation is dissipating. Markets chose to assign greater importance to the worrying economic signal sent by the dismal data which was later exacerbated by the Fed’s most hawkish member, James Bullard’s comments that the Fed ought to hike rates quickly above 5% before reacting to data (lower inflation data).

US equity futures point towards a lower open in what would be a continuation of yesterday’s lower price action. In the days prior, equities were buoyed on hopes of a slowdown in rate hikes due to lower CPI prints already witnessed.

S&P 500 futures made another tag of trendline resistance as the longer-term trend of lower highs continues. The 200 SMA now adds to the zone of resistance around the intersection of the trendline and the 38.3% Fibonacci retracement of the major 2022 move. Trading below the 3950 level opens up the possibility of further selling towards the zone of support at the 23.6% and 38.2% retracement of the 2022 and 2020 to 2022 moves, respectively. With markets remaining sensitive to incoming data, the first look at US GDP next Thursday could see another adjustment in price action if hopes of a soft landing reemerge. 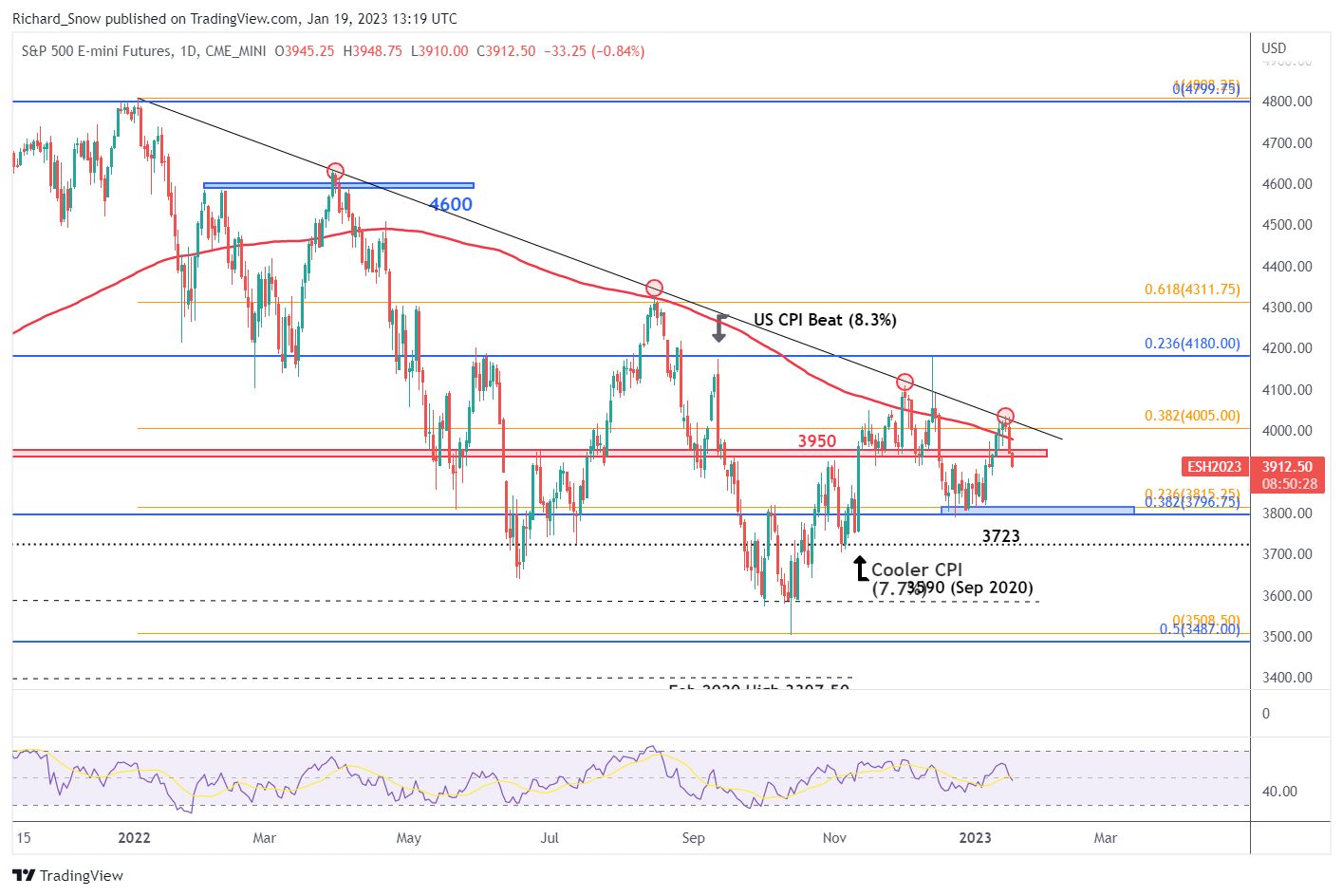 The Nasdaq has shown the smallest advance of the three indices for a while now and remains susceptible to news of a 2023 recession. Keep in mind the first of the big tech stocks, Netflix is due to report less than stellar results for Q4 and Microsoft and Tesla continue proceedings next week.

The 200 SMA has kept price action at bay and now the index trades below 11,540 with further levels of support at 11,182 and 10,945 before the 61.8% retracement of the major 2020 move comes into focus. Resistance at the 50% retracement remains – this level held prices at bay twice in October of last year. 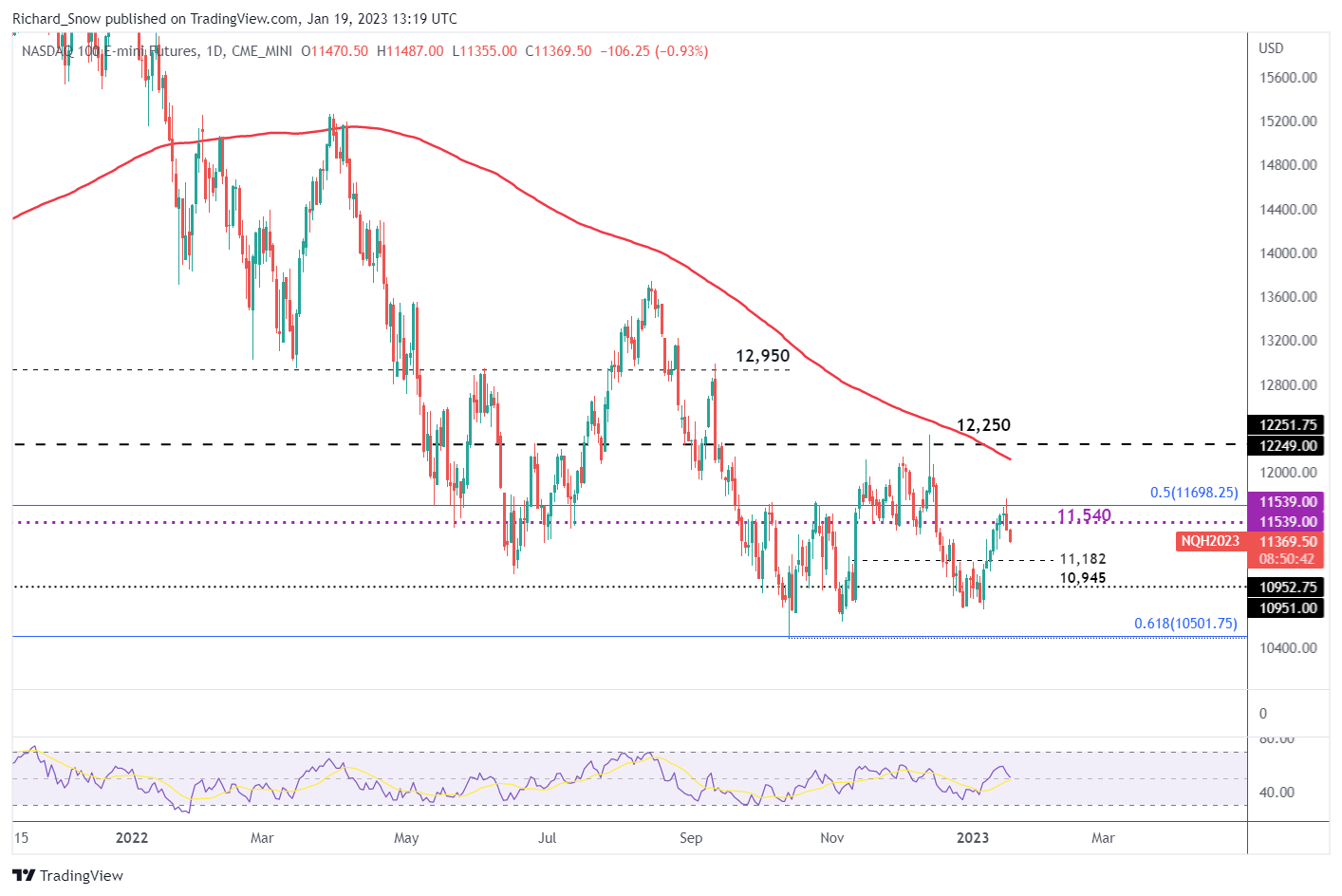 Yesterday, price action revealed a preference for selling in the Dow compared to the other US indices. By composition, the Dow is known for having less exposure to technology stocks, which typically come off hardest when disappointing economic news and hawkish Fed statements hit the wires. However, the Dow can be seen as a victim of its own relative success in that it outperformed both the S&P 500 and the Nasdaq, meaning it has a greater way to go when market sentiment shifts. That’s not to say that momentum has necessarily shifted now, rather it is something to keep in mind.

The Dow found resistance at the prior pivot point around 34,280 before heading lower. That remains the level to clear if bulls are to have any chance of reviving a bullish continuation. A lower move after the open could see a test of the lows around prior consolidation at 32,800 before the 200 SMA becomes relevant once more. 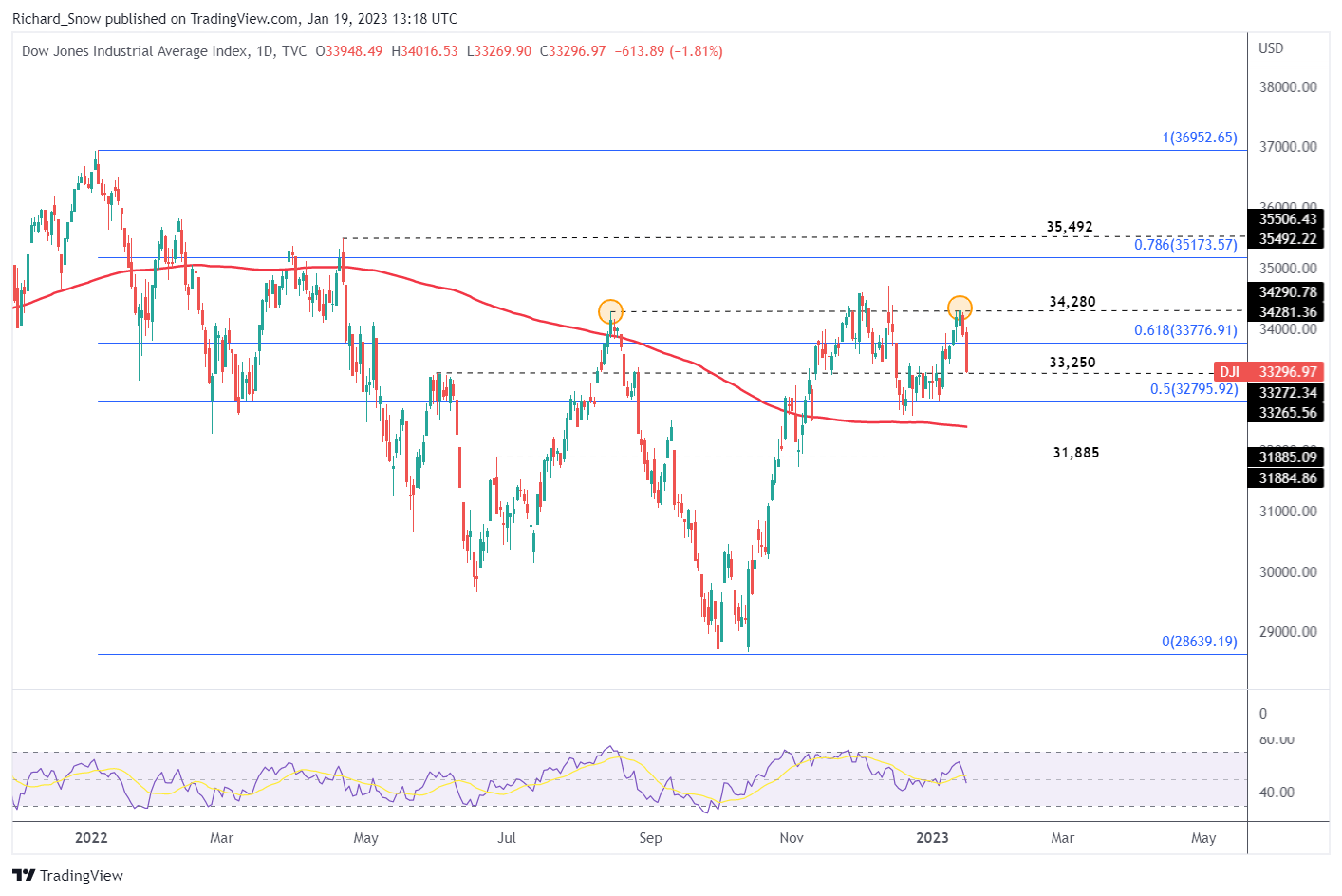