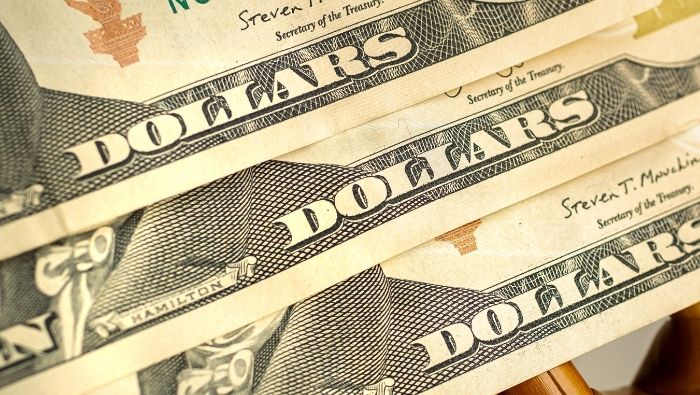 The US Dollar weekly bar is currently working on a doji, which, for bulls, could be considered as some form of a win.

The sell-off in the USD has continued for more than three months now and DXY is hanging right at the mid-line of the two-year-trend. The bullish move that started in 2021 and continued through 2022 was incredibly forceful, and even historic from some perspectives. But we’ve now seen 50% of that move erased in just a little under four months after the USD set its current high on September 28th. The 50% mark of that major move is right at 101.99, which was in-play through the past week’s trade.

At this point there’s no clear evidence yet that the sell-off in the Dollar is over. There may be a very early sign of hope but, it would be in an extreme stage of infancy and largely based on the response that showed on Wednesday after price had pushed down to that fresh low in the USD.

Despite the fact that bears had ample motivation as taken from those early-morning reports; what was showing as a bearish engulf in the USD with a push down to fresh seven-month-lows was faded, and that Wednesday candle finished as a doji with a long lower wick.

Thursday and Friday both saw support hold at a higher-low of 101.99, around that level taken from the Fibonacci study above; and this can, again, be an early sign of a possible bounce. Sellers have remained vigilant, however, so there’s not a clear bullish path at this point. The level of interest for that appears around the 103.00 handle and if bulls can substantiate a bounce above that level, there could be an opening door for a retracement theme in the USD.

EUR/USD spent the past week in a range. The pair broke-out last Thursday and set a fresh seven-month-high; but since then price has held that resistance as a shorter-term theme of mean-reversion has showed.

On the support side of the matter, a key zone of prior resistance is still holding the lows and this plots from around 1.0736 up to 1.0787. This zone was last tested on Wednesday and Thursday before prices lifted back towards the resistance-side of that range.

There’s still no clear evidence of a top yet and while the range could seem simple to bias to the downside given how strong the rally over the past few months has been, I think the bigger item of note is the hold of support at this prior resistance zone.

EUR/USD may need to see one more poke up to a fresh high before sellers make a more concerted effort at the reversal. Atop price action there are two more nearby spots of key resistance, at the 1.0933 double top from last April, after which the 1.1000 psychological level comes back into the picture.

For support – if sellers can take out 1.0736 in short-order, the idea of bearish swing continuation will begin to look much more attractive as there’ll be a lower-low to work with.

Cable started the year with what looked to be a bearish turn. After holding resistance at a key Fibonacci level over a three-week-span in December, sellers had started to push a little more after the New Year open and ran price all the way down to the Fibonacci level at 1.1843.

But, that’s around the time that the disappointing PMI report was released on January 6th and that led to a strong move in USD markets. As DXY put in a bearish engulf that triggered another wave in the sell-off, a bullish engulf showed in GBP/USD right off of that support and the trend has been tilted-higher ever since.

Price is now re-approaching the prior high around 1.2450 and just above that is another potential resistance area with the 1.2500 psychological level.

AUD/USD began to re-test a major area on the chart this week. This runs around the .7000 big figure and it also syncs with a Fibonacci level at .7053 to create a zone of interest. After running into that resistance, the bullish trend was put on pause as last week’s candlestick created a doji formation illustrating some element of indecision.

Wednesday’s session brought a sizable reaction to that resistance zone and that continued through Thursday. On Friday, support showed at prior resistance as the trend pushed back-up, which keeps the near-term bullish trend alive on the daily as there’s been a succession of higher-highs and higher-lows.

The bigger question is whether bulls can work through that resistance on the next approach, or whether this leads to a lower-high and a deeper pullback scenario. Sellers pushing below the Thursday swing-low opens the door for bearish swings but, until then, the higher-highs and higher-lows are setting up for another resistance test in the pair early next week.

USD/CAD is in an interesting technical position. Longer-term, from the monthly chart, the pair remains in a wide range and that’s been going on for more than six years now.

Shorter-term, there have been multiple trends inside of this longer-term range and the big question is whether prices are nearing a trip back down towards the bottom-side of the formation. 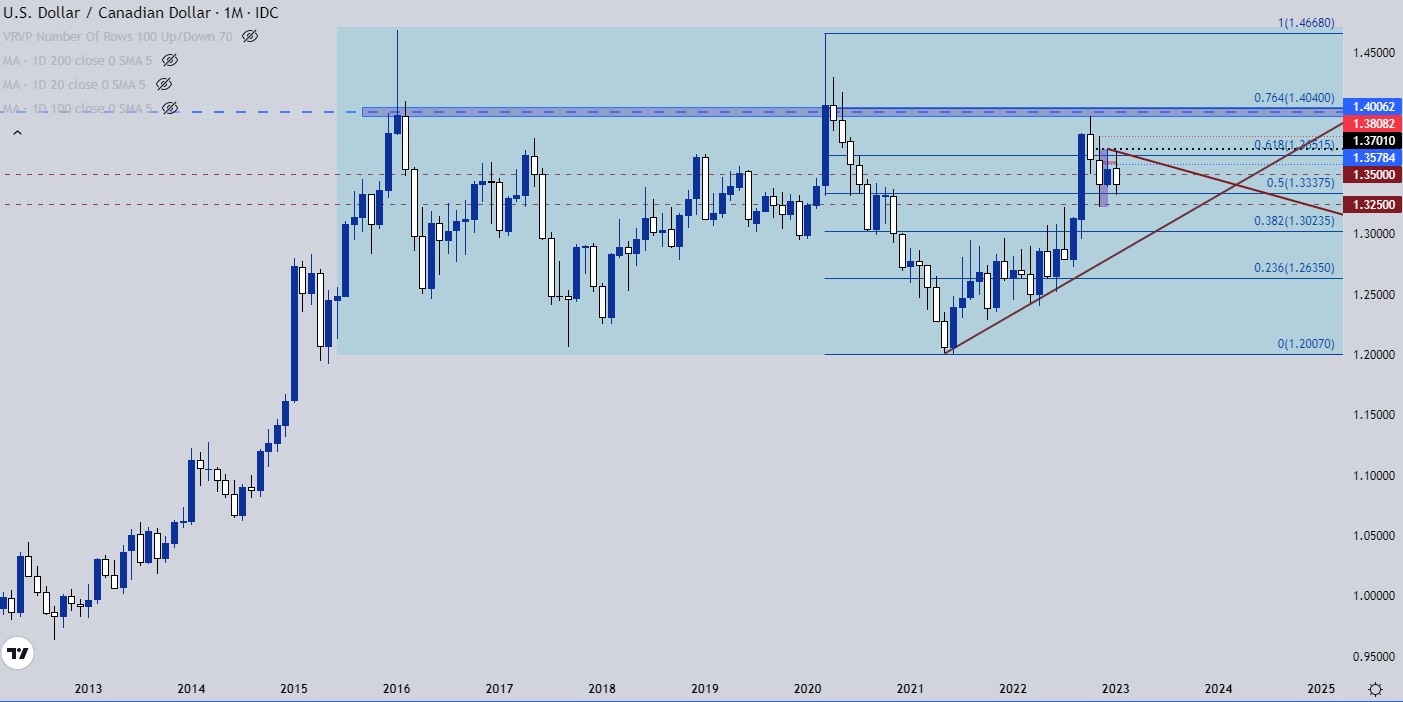 On a shorter-term basis, price has set a lower-high at 1.3700, well-below the failed run at the 1.4000 handle from October. There isn’t yet a lower-low to work with as price action is holding Fibonacci support that’s just a bit above the most recent higher-low at 1.3250. This week’s resistance hold at the 1.3500 psychological level keeps the door open for short-term weakness in the pair.

If sellers can test through the 1.3250 level in short order, there’ll be a more enticing case for bearish swings in the pair as there would be a fresh lower-low to accompany that recent lower-high. Below 1.3250, the next significant spot of support is around the 1.3000 level which is confluent with the 38.2% Fibonacci retracement of last year’s major move.