Job openings for August came in below expectations, potentially fueling the debate as to whether the labor market is showing signs of cooling. August JOLTS came in at 10.053 million against a consensus estimate of 10.775 million. It is important to remember that this is simply one data point, and nonfarm payrolls data this Friday is likely to offer a better clue as to future Fed policy. Nonetheless, markets have latched onto the narrative of a pivot following this print, with risk moving higher and yields lower.

The US Dollar Index (DXY) has been on the decline lately as US Treasury yields have cooled. After piercing through 114.00 in the week following the September FOMC meeting. DXY has tumbled from those highs, as the terminal rate for the Federal Reserve has come in by roughly 30 basis points (bps). After falling through support below the 112.00 psychological level, price has continued to cascade lower. Bears now eye the 110.60 level, which acted as support on September 21. 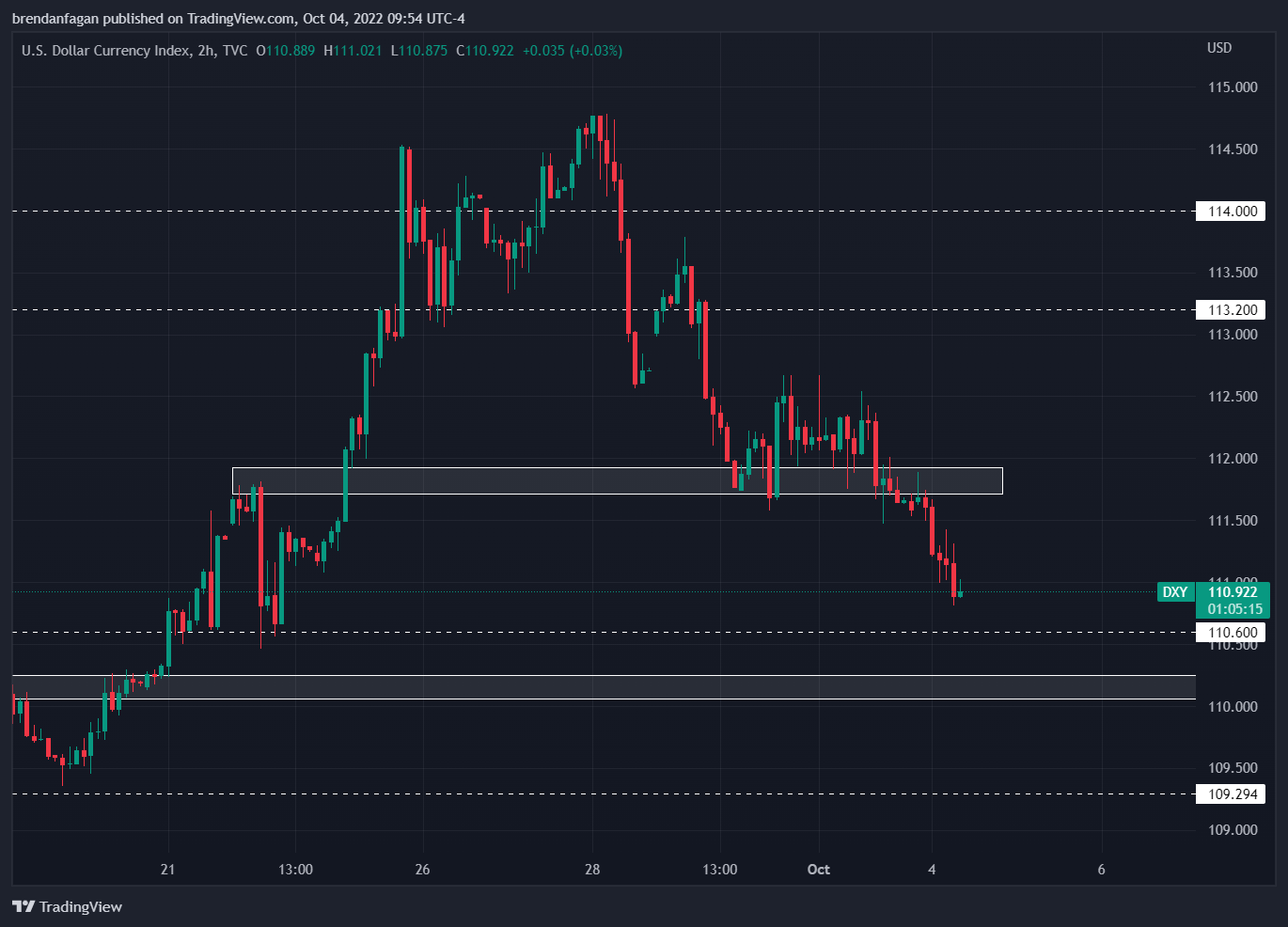 US Treasury yields have come in of late as market participants once again look to price in a less aggressive Federal Reserve. The market has latched on to the recent Bank of England emergency action as well as last night’s dovish hike from the Reserve Bank of Australia. These recent developments appear to have fostered the debate as to whether the Federal Reserve will follow suit.

However, it should be noted that the market on multiple occasions has been caught with the proverbial “hand in the cookie jar,” having already made multiple attempts to price in a Federal Reserve pivot. These rallies in risk have been brushed off by Fed Chair Jerome Powell, who continues to reiterate that “nothing has changed since Jackson Hole.” While contagion fears are prevalent following the nightmare situation in the UK last week, the Federal Reserve continues to remain adamant that they will push toward more restrictive policy in order to reign in inflation. With such a strong labor market in the US, the FOMC has enough rope to work with to solely focus on the price stability portion of their mandate. 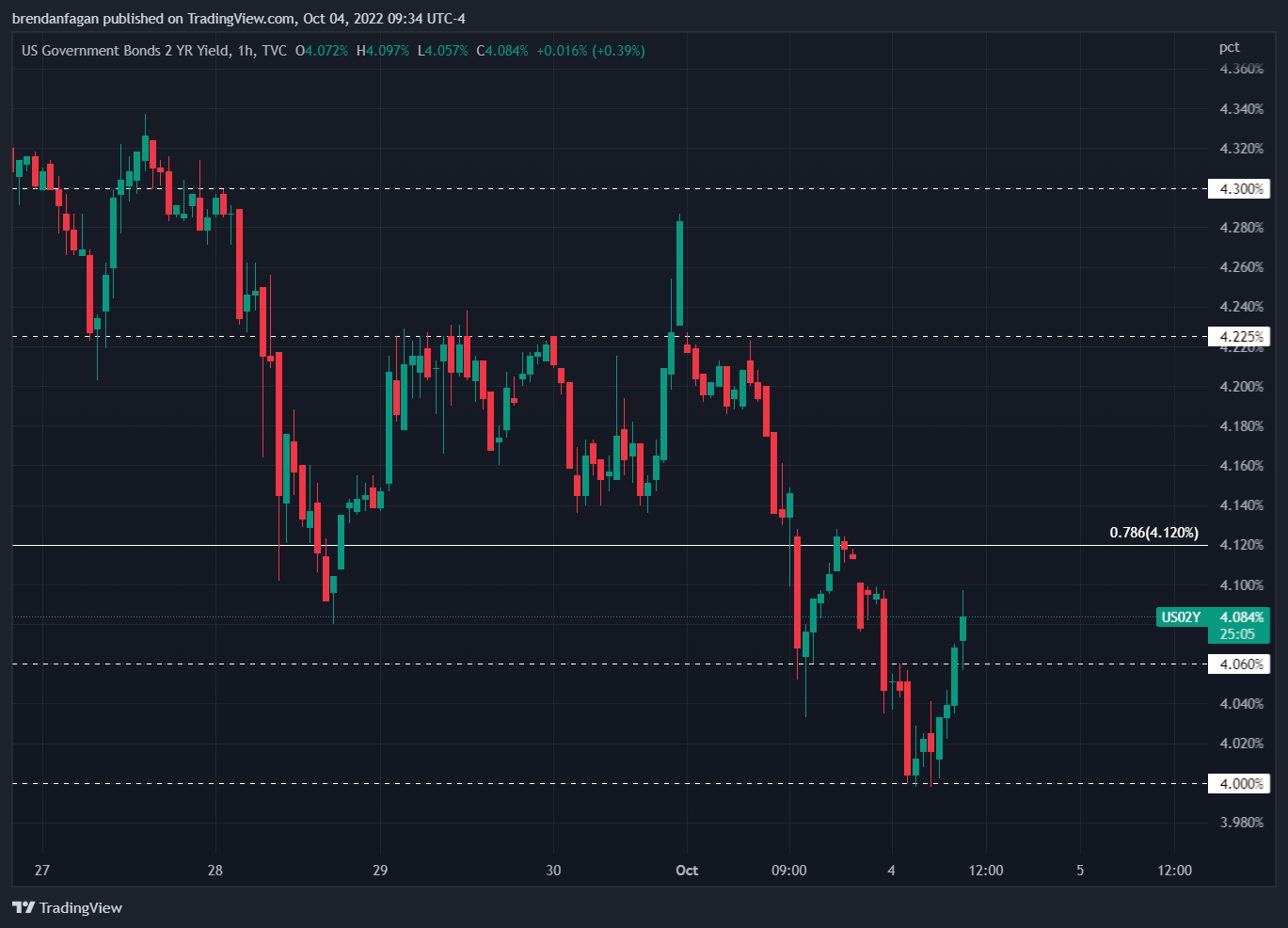 Currently, the market is priced for a 75 basis point rate hike at the November meeting. This has been echoed by recent Fedspeak, with multiple FOMC members indicating that 75 is in fact their base case for November. But when you look out to March, pricing has come in quite considerably. The market is now effectively split between 125 bps and 150 bps of tightening between now and the March policy meeting. These expectations are likely to swing as traders digest the many inflation and labor market data prints between now and then. 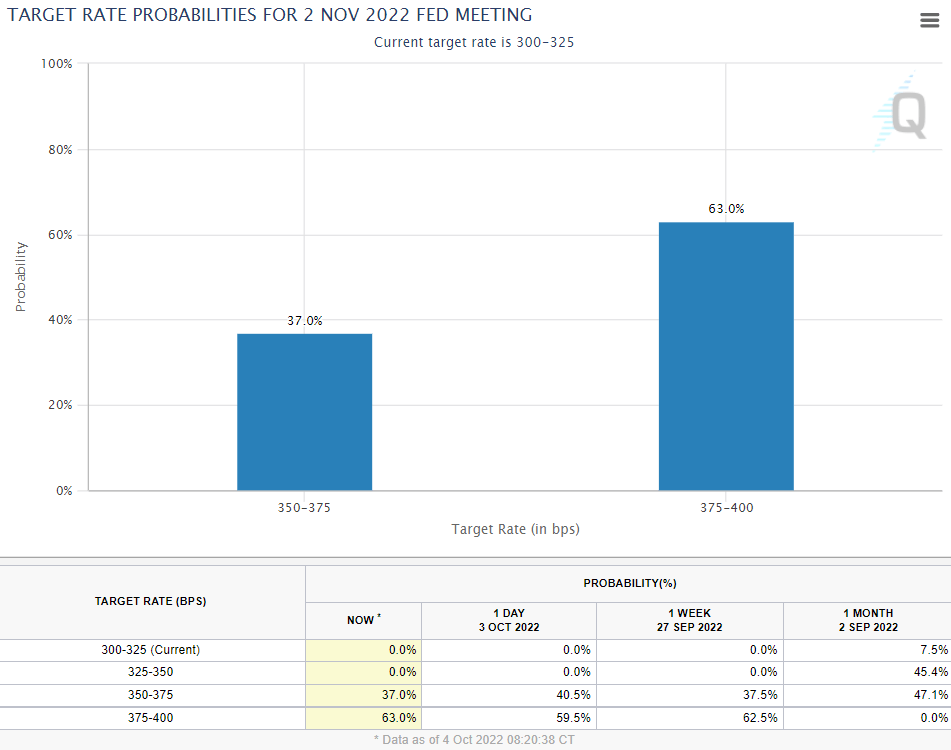 Courtesy of the CME FedWatch Tool