Euro hit the afterburners last night as it climbed to a seven-week high toward 1.0100.

EUR/USD has been ratcheted higher on a weaker US Dollar across the board as the market looks toward a less hawkish Federal Reserve.

The Bank of Canada (BoC) raised their overnight lending rate by 50 basis points (bps), less than the 75 bp anticipated. This comes on top of the Reserve Bank of Australia (RBA) lifting their cash rate target by 25 bps instead of 50 bps forecast earlier this month.

The move by the BoC appears to have led the market to think that the Fed could be looking for a pause in their aggressive rate rise stance toward stamping out ‘eye-watering’ inflation.

In these circumstances, the ‘big dollar’ has been undermined by Treasury yields slipping lower all along the curve. The 10-year note dipped below 4.0% overnight, reversing the recent climb. It peaked at 4.335% last week.

Despite the perceived ‘pivot’, futures markets and economists’ forecasts have a 75 bp gain for the Fed’s target rate penned in for next Wednesday.

The European Central Bank will be meeting later today to decide on their target rate. The market has priced in a 75 basis point (bp) hike and a Bloomberg survey of economists concurs with that outlook.

The impending winter in the Northern Hemisphere presents significant risks for the European continent with energy sources under enormous strain. A positive development has been the relatively mild autumn weather conditions so far.

This has led to the build-up of liquefied natural gas (LNG) storage being ahead of schedule as inventory levels near capacity. An issue has arisen whereby the storage of LNG is becoming increasingly difficult.

Unlike many other commodities, LNG has very specific requirements to be stored safely and the infrastructure is costly and has a long construction lead time. In any case, the problems around energy supply are not resolved.

If the energy situation were to change or the Fed reiterates its hawkish stance, EUR/USD could see more volatility.

EUR/USD has broken the topside of a descending trend channel and has recently crossed above the 55-day simple moving average (SMA).

At the same time, it has moved outside the upper band of the 21-day simple moving average (SMA) based Bollinger Band. A close back inside the band could indicate a pause in bullish momentum or a potential reversal. 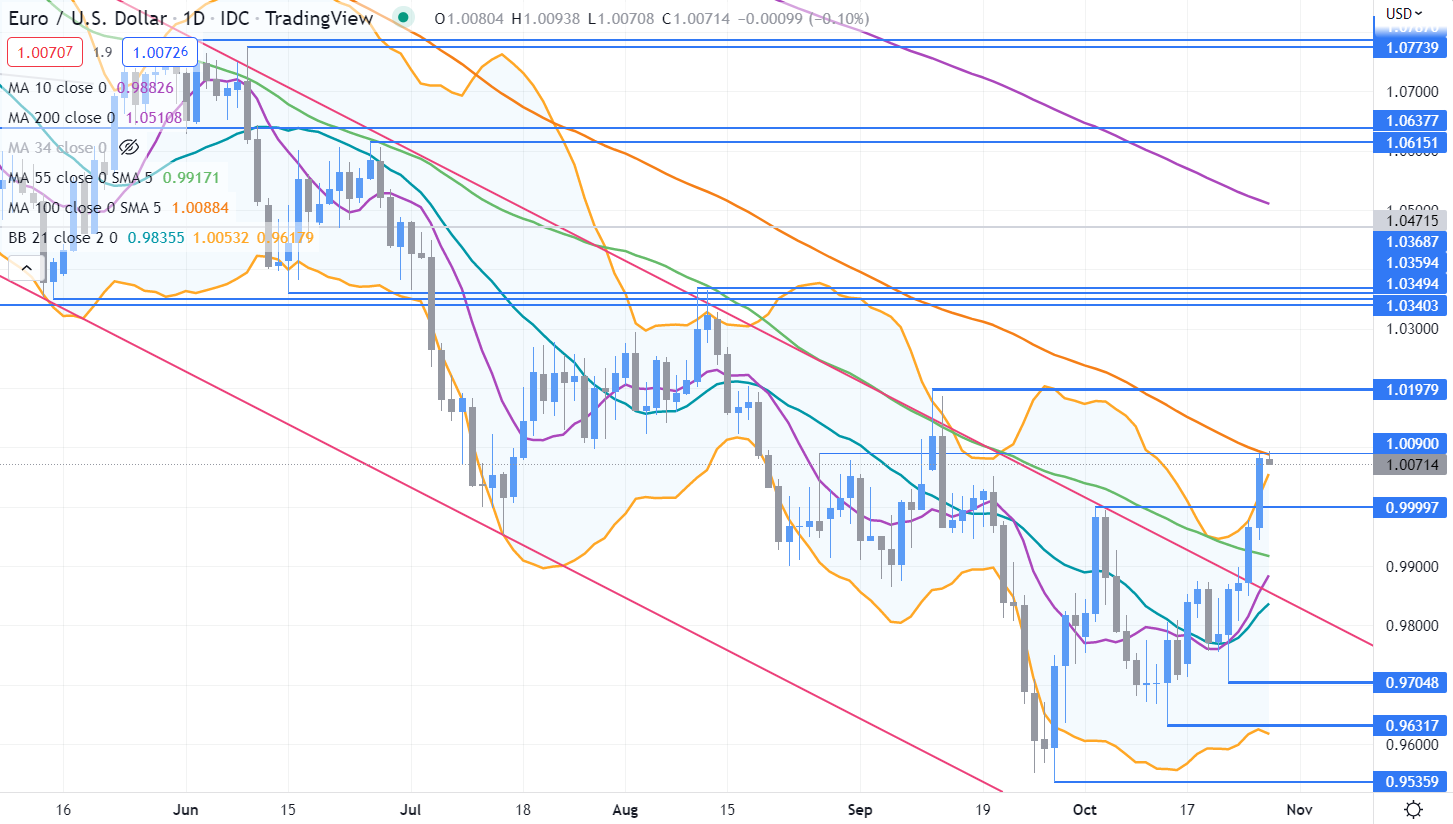