The US dollar, analyzed via the US dollar basket (DXY), has experienced a significant drop since the cooler inflation print last Thursday – which has picked up momentum despite yesterday’s attempt to reverse recent losses. Market expectations of slower rate hikes and a lower potential terminal rate for US interest rates (currently 4.9% in June) resulted in a mass repositioning in USD.

Dovish sentiment regarding the slowing of the rate of future hikes expressed by numerous Fed members is the message the market is choosing to hear despite continued warnings that inflation is too high and the Fed is set to tighten financial conditions until “compelling evidence” confirms that inflation is heading back towards target.

However, the distinct lack of high importance USD data over the next seven days suggests that the current dollar selloff faces little opposition via the economic calendar. Retail sales are forecast to rise after registering no month-on-month change in September, while the preliminary building permits data is likely to reveal the negative effects of higher interest rates in the property sector.

Other standouts include the wrapping up of the US midterms, although, the results appear to be showing Democrats retaining control of the Senate with the Republicans moving within one seat of a majority in the House of Representatives. Additionally, the three-hour long meeting between Biden and Xi was reported to be rather productive and has over-shadowed disappointing retail sales data in China due to continuing lockdowns.

Asian equities led the risk rally and there have been positive moves for high beta currencies like the Aussie, Kiwi Dollar, Chinese Yuan as well as GBP and EUR too – which are all higher against the dollar. Something to keep in mind after the collapse of FTX is the potential for liquidity issues in ‘traditional’ finance markets – which has previously resulted in a scramble for USD.

The weekly DXY chart reveals the extent of the dollar selloff, which has broken well below the rather steep trendline and shows little sign of reversal. The weekly chart also helps to show the reluctance for DXY to trade above the September high with a number of higher wicks clearly visible. 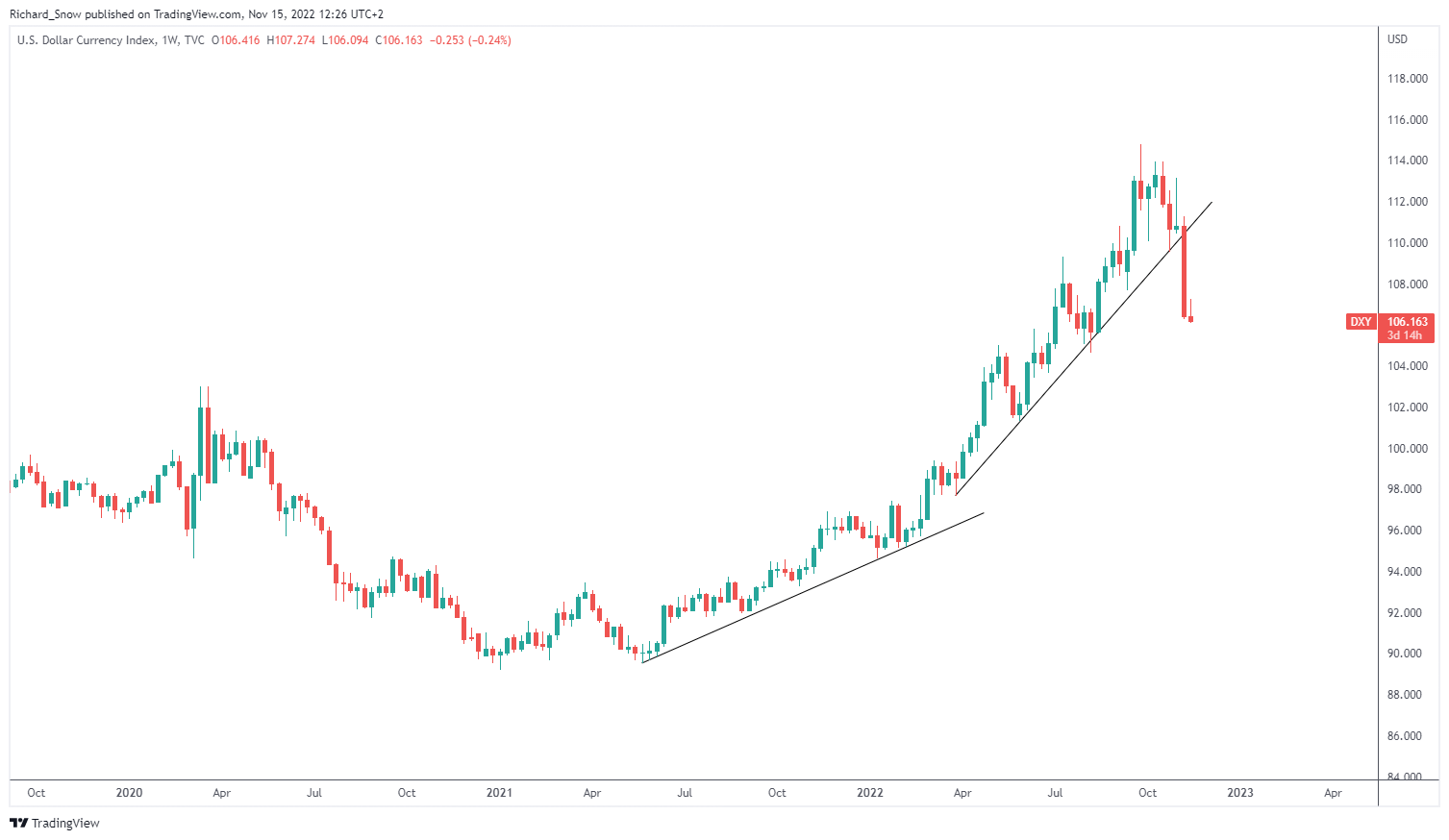 The daily chart shows the magnitude of the selloff as the 110.30 level and 109.30 were passed with ease. Yesterday’s rise appears to have simply functioned as an opportunity to add to the selling pressure from more attractive levels. Levels of support appear at the 105 psychological level, followed by the 1999 high of 104.90 which has functioned as a pivot point between May and September this year. The MACD reveals that momentum is still on the side of bears, while the RSI has fast approached ‘oversold’ conditions but has not crossed over yet 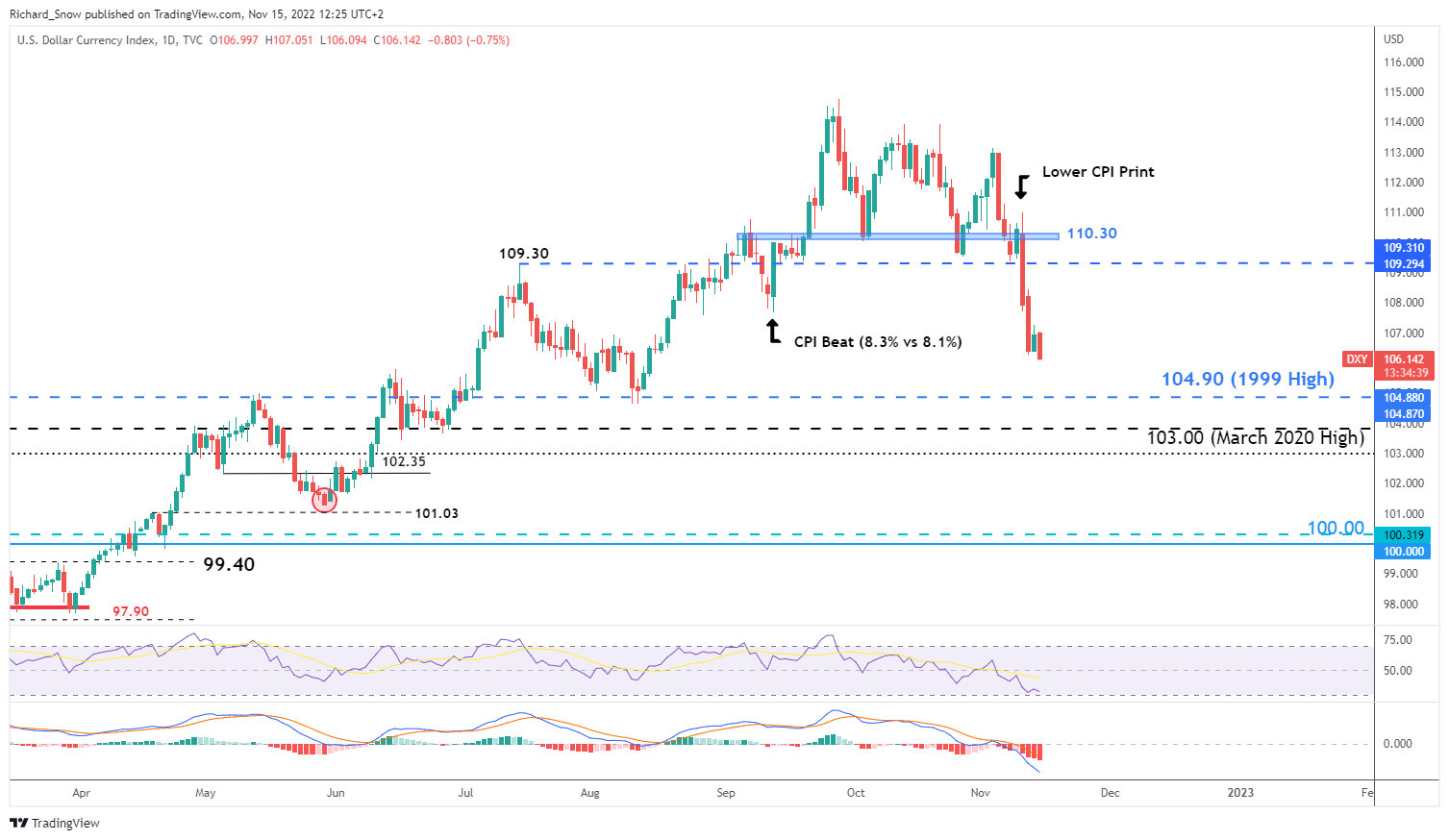 Given the repricing of the dollar, US treasuries and the Fed’s terminal rate, it would seem like the greenback may continue selling off this week, particularly with the lack of high importance scheduled risk event to stand in the way. Naturally, after last week’s CPI print there is a whole host of Fed speakers scheduled this week, with Lisa Cook, Patrick Harker and Michael Barr later today.

However, the person with the most sway is unsurprisingly Jerome Powell meaning traders ought to lookout for future speaking engagements/interviews in the days ahead. Powell and the Fed are motivated to reduce the level of demand in the economy and the recent rise in risk assets may be viewed as contrary to the Fed’s objective to bring down inflation.