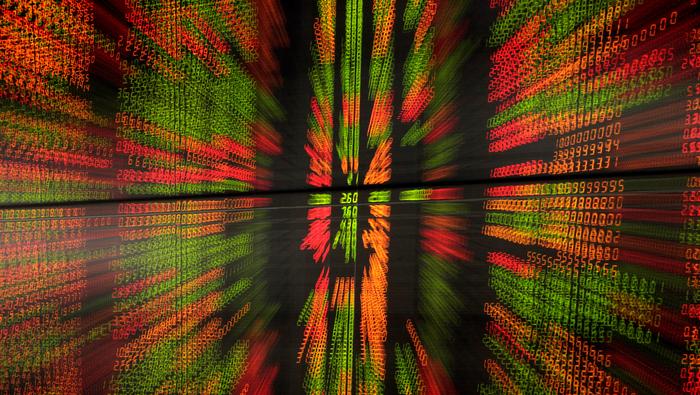 The buoyancy of hope for the bullishly-inclined at the start of this week seems to have fully collapsed. That is perhaps not particularly surprising when we compare the fundamental dearth in this week’s calendar versus the deep run of thematic-directed event risk next week. From my preferred, imperfect measure of risk appetite, the S&P 500, the past session opened to another gap lower on the open. What was more technically impressive, however, was the reversal of the recovery effort. Not only would that lead to a larger -0.8 percent decline on the day, but it would also leave the index with its largest ‘upper wick’ (a sort of measure of bearish intraday reversal) since June 15th – the day the FOMC announced a 75 basis point rate hike. There is materially less fundamental influence at play now than there was back then, but the slip isn’t as striking. More broadly, the spectrum of risk assets I track – global indices, emerging market assets, junk bonds – rendered similar results on the day. That said, there is an outlier to note in the more focused risk measure of the Nasdaq 100 to Dow ratio (growth to value) which has slipped back below the midpoint of its 2018 to 2021 charge. That is a more targeted sentiment gauge rather than just a blunt ‘risk’ measure.. 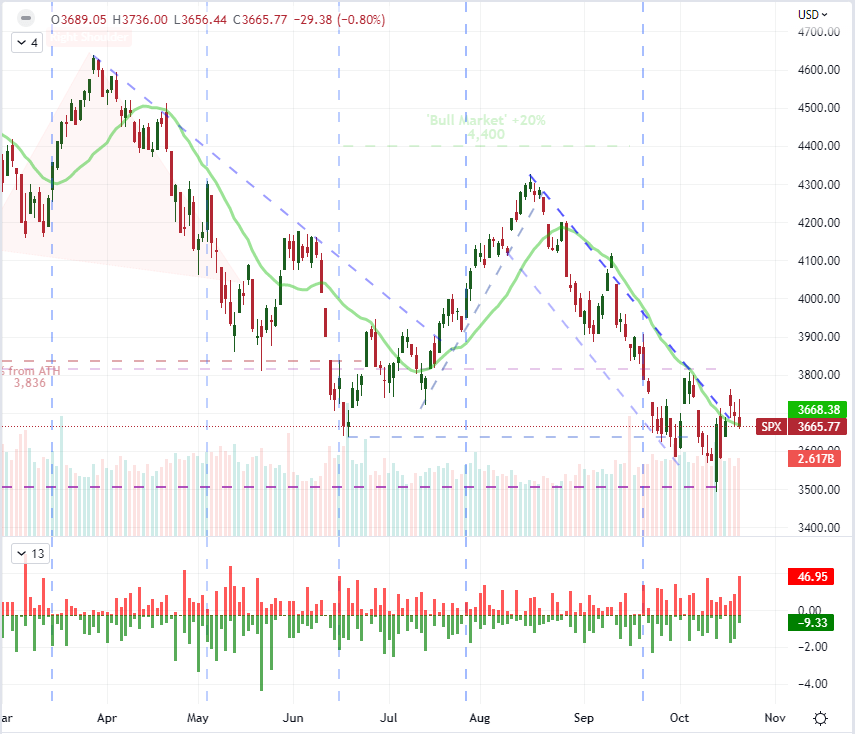 Through this final session of the week, I consider the probability of charging a systemically-relevant trend an exceptionally low probability. Committing to a medium-term – or greater – rally just before a weekend is a high barrier in itself. Yet, when we factor in the anticipation for an unusually dense calendar for critical fundamental events in the week ahead, mustering the kind of confidence among market participants to override concern for what is ahead seems increasingly improbable. With event risk like US 3Q GDP, October PMIs for the developed world, the ECB rate decision and FAANG earnings among other top listings; to commit to a definitive trend now seems a defiance of the prioritization from the non-speculative class. That is not to say that sparking a definitive trend now is out of the realm of possibility. Rather, to override the important updates ahead, we would likely need to absorb a critical and previously unexpected development for the global financial system. Again, possible but not probable. 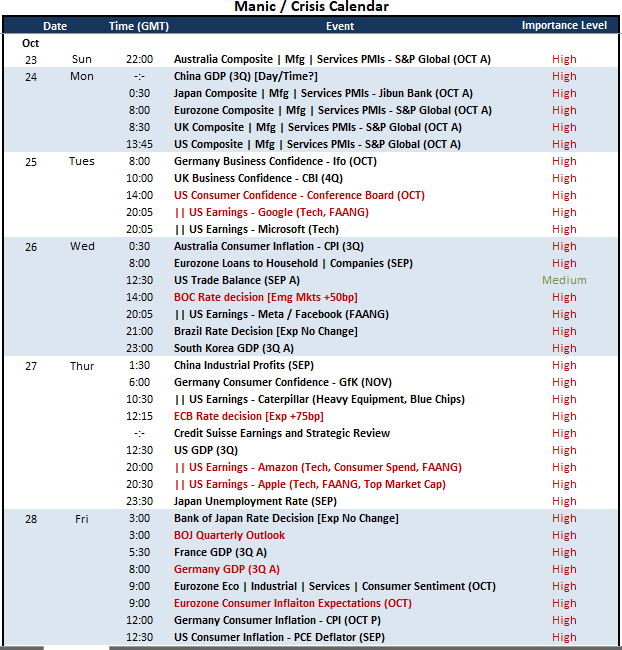 USDJPY and Financials System, ‘Recession’ Designation that Stretches Beyond the US Housing Market

Whether this week or next, I maintain a hierarchy of importance for potentially market-moving fundamental developments. Monetary policy speculative has taken a backseat among the top fundamental themes for me lately as we are in the desert between critical policy updates from the likes of the Federal Reserve (in two weeks) and European Central Bank (due next week). The end point to most economic debates as to whether a major economy or the world is heading towards recession is more pressing a matter at the moment. The warnings of a US recession from economists, credit rating agencies and some CEOs (Tesla’s Musk and Amazon’s Bezos) are balanced against the enthusiasm of the White House and individual investors. The 10-year low in existing home sales data this past session is relevant, but it isn’t exactly an earthquake. Perhaps next week’s US 3Q GDP release can get the ball rolling. In the meantime, financial stability is a far more unpredictable matter. While there are certainly more at-risk countries across the globe, the top of my watch list remains Japan. Whether through monetary policy divergence, growth potential disparity or an upended ‘safe haven’ perspective; USDJPY has advanced for 12 consecutive trading days (the longest such run again since 1973) to top 150. That is an overt defiance to the Ministry of Finance’s wishes – and likely efforts – to prop the Yen up. The loss of credibility for policy groups in one of the largest economies of the world carries serious abstract risk. 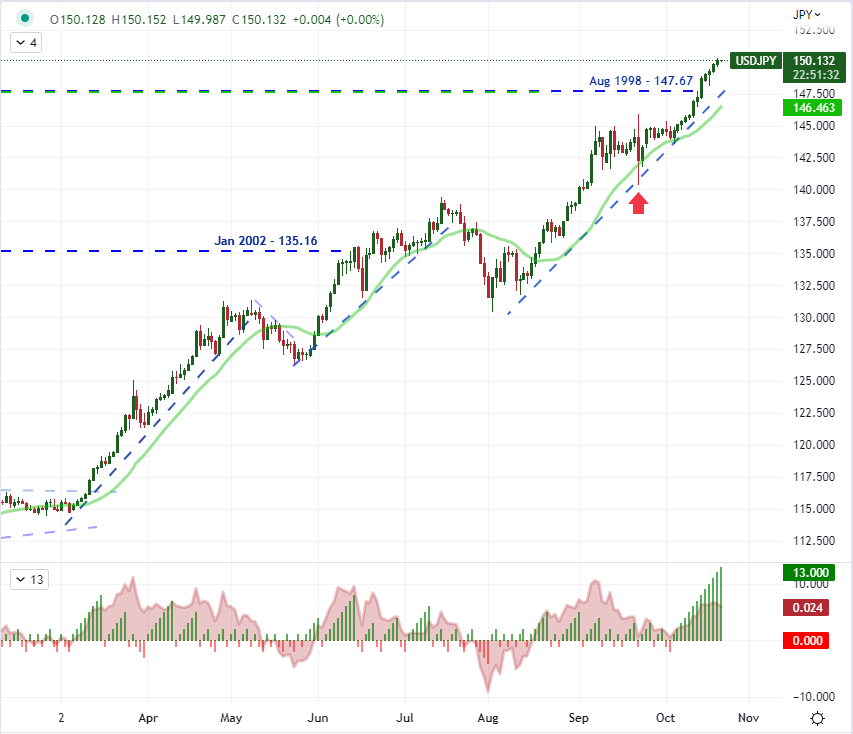 In the more traditional fundamental corridor, the macro listings this past session struggled to scale the wall of inertia. While it may not have been particularly market moving for US indices or the Dollar this past session, the data that was offered up should not go unincorporated into our broader assessment of the world’s largest economy. The US Leading Index from the Conference Board contracted for yet another month to warn of impending recession while initial jobless claims dropped unexpectedly to 214K. Most remarkable for me, however, was the 1.5 percent drop in existing home sales to 4.71 million units. That is the lowest for the series in a decade and reinforces the assessment from the NAHB previously that the US housing market is in a ‘recession’. Can we really isolate such a contraction to one of the largest sources of wealth for the largest consumer in the world and not expect spillover? 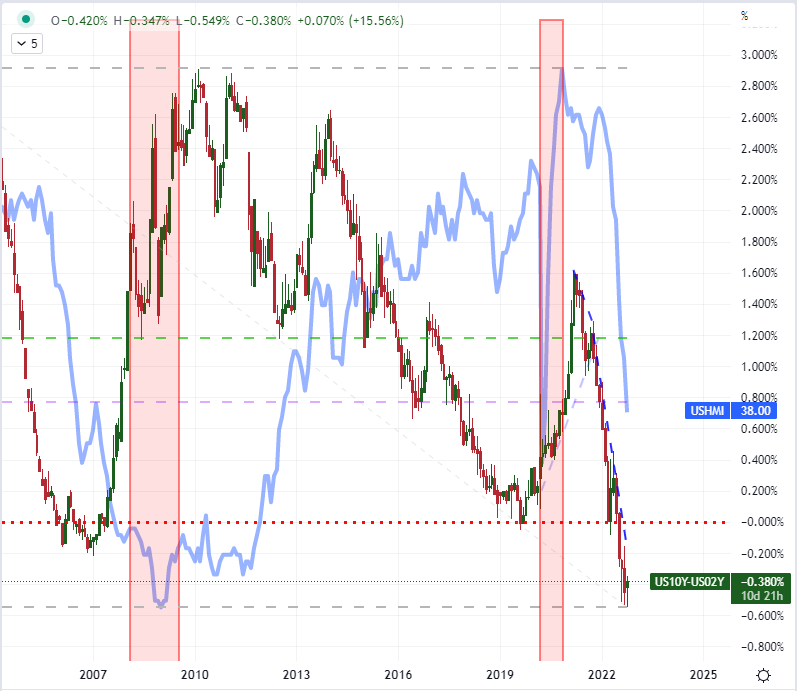 For Friday: Modest Volatility Potential for the Yen, Pound and Canadian Dollar

In the final 24 hour period of this week, the economic docket holds a handful of ‘important’ updates that don’t readily contribute to the systemic view of market confidence. After the Japanese inflation report which is unlikely to alter expectations for an extreme contrast in policy bearings, the Canadian docket seems to have serious weight in a string of indicators (August retail sales, September manufacturing sales and home prices) that can find impact due to their overlap. That said, I will not be looking to USDCAD to readily clear any high-level technical barriers. Meanwhile, the Eurozone consumer confidence survey is worth absorbing because of the expectations for a 75bp rate hike from the ECB next week; while the Hong Kong business confidence report comes at a precarious point whereby the Heng Sang is pushing more-than-decade lows even though other top indices are holding up. 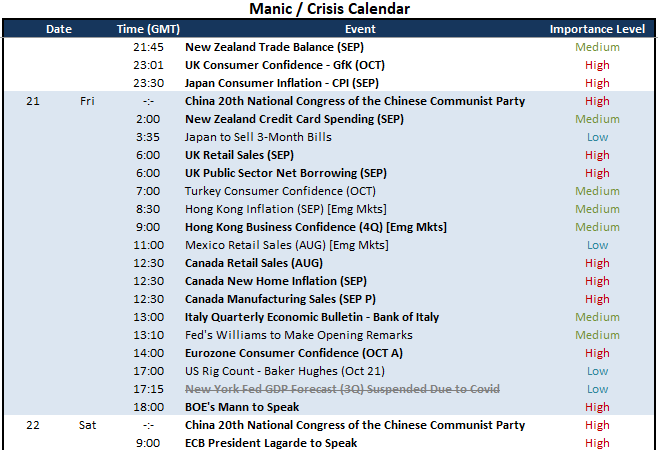 Top event risk for me through this final 24 hours session is probable the September UK retail sales and public sector borrowing reports. It isn’t that these reading are inherently important, but rather the focus on the UK currency, financial system and currency has been amplified by the struggle by the Liz Truss government up through her announced resignation this past session. Is the stepping down by the sponsor for the mini-budget that sent such shockwaves through the financial system a development for stability for a shaken London market? I believe that it can restore some measure of stability, but confidence is still beyond the immediate light. That said, the UK retail sales and net consumer borrowing statistics would seem to be event more important now than they would have been in past weeks. Perhaps it can nudge the sudden downshift in volatility (below is the 4-day to 20-day ATR ratio) back to life. 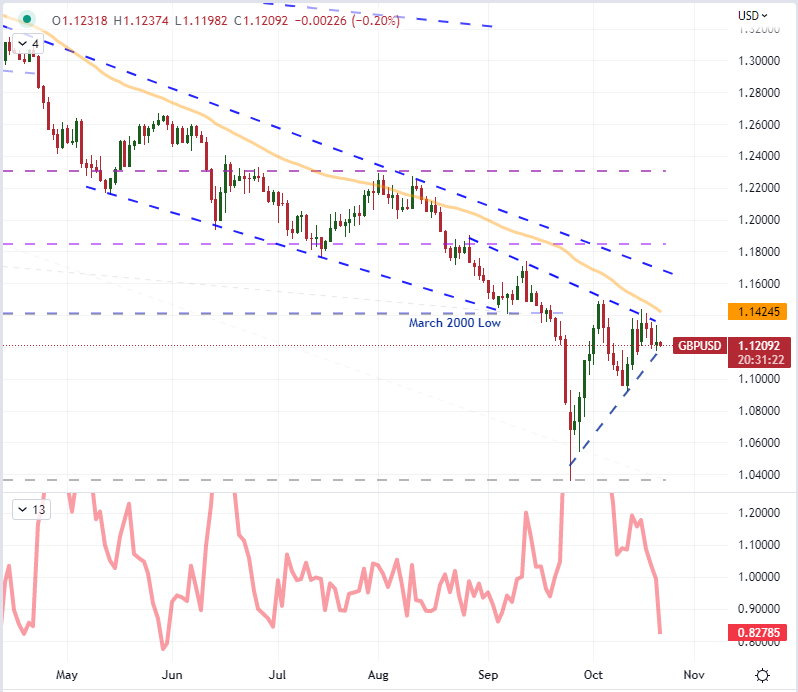