Recommended by Michael Boutros
Download the Full Oil Q4 Forecast!
Get My Guide

Crude oil prices plunged a staggering 25% in the third quarter. WTI fell towards its yearly lows in late September. The breakdown below confluent technical support threatens further declines in the months ahead. I’m on the lookout for a possible exhaustion low into the close of the year as price approaches key inflection zones that may offer a reprieve to the recent selling pressure. 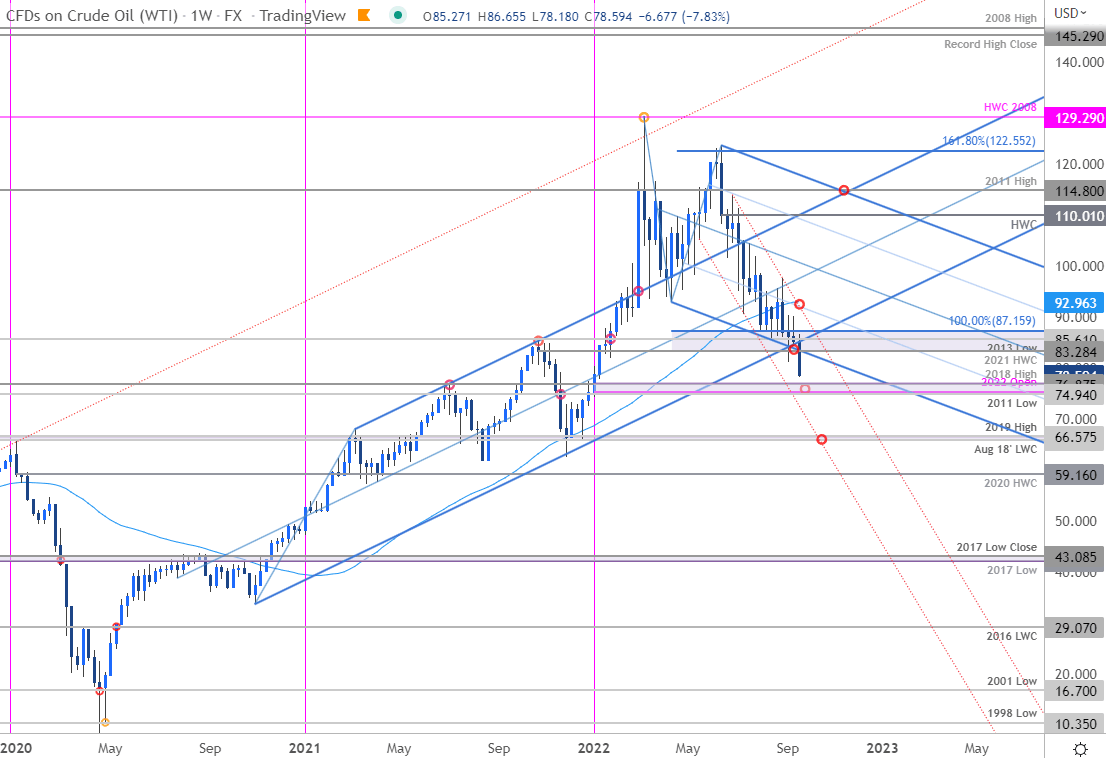 Oil prices are nearly 40% off the yearly highs with a four-month decline taking WTI below a key support zone I’ve been tracking for months now at 83.28-87.15 – a region defined by the 2021 high-week close, the 2013 swing low and the 100% extension of the yearly decline. Note that this region also converges on the the 2020 uptrend and the 2022 yearly downtrend support slopes, further highlighting the technical significance of this threshold.

Initial support objectives now rest at the 2011 low / 2022 yearly open / 2018 high at 74.94-76.87 with a more significant pivot zone just lower at 65.92-66.57. Both zones are of interest for possible downside exhaustion IF reached. Resistance is now eyed back at 87.15 with a breach / weekly close above the 52-week moving average (currently ~93) needed to invalidate the current downtrend.

The threat remains tilted to the downside heading into fourth quarter but we’re on the lookout for possible price inflection / downside exhaustion in the months ahead. From a trading standpoint, a breach / weekly close above the June channel line (red) would be needed to alleviate further downside pressure in oil prices. Note that losses sub 65.92 would be extremely damaging from a technical standpoint with such a scenario threatening a full-on breakdown towards the 2020 high-week close near 59. It’s a BIG quarter for crude prices as we search for a low.