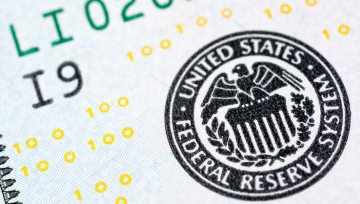 Neither Dollar Nor Stocks Respond to NY Fed’s Inflation Expectations Like CPI, So What Now?

Speculative markets received an enormous boost through the end of this past week thanks to US consumer inflation report offering a modestly cooler pace price pressures. Yet, as we discussed last week, the downshift in headline CPI from an 8.2 to 7.7 percent pace may have been larger than expected, but it is hardly closing the gap to the Federal Reserve’s 2.0 percent target rate. Markets are forward looking and sensitive to the amplified impact from interest rates that influence trillions of dollar of economic activity, but it is a stretch to bring forward the expectations for rates balance so quickly. As such, the follow through on last week’s rally wouldn’t readily span the weekend gap to simply pick up the pace on the open. Amid a mixed bag of performance of European equities and some carry trade advancing; we would also see US and Asian indices slide alongside emerging markets and junk bonds. For the S&P 500, the -0.9 percent drop Monday is not statistically remarkable, but it does coincide with technical overhead in a zone resistance between the 61.8 percent Fibonacci retracement of the August to October bear leg and the 38.2 percent ‘Fib’ of the 2022 range from 4,010 to 3,995. I see this more an indication of lost conviction than a definitive reversal in conviction. We are still looking for that fundamental guide. 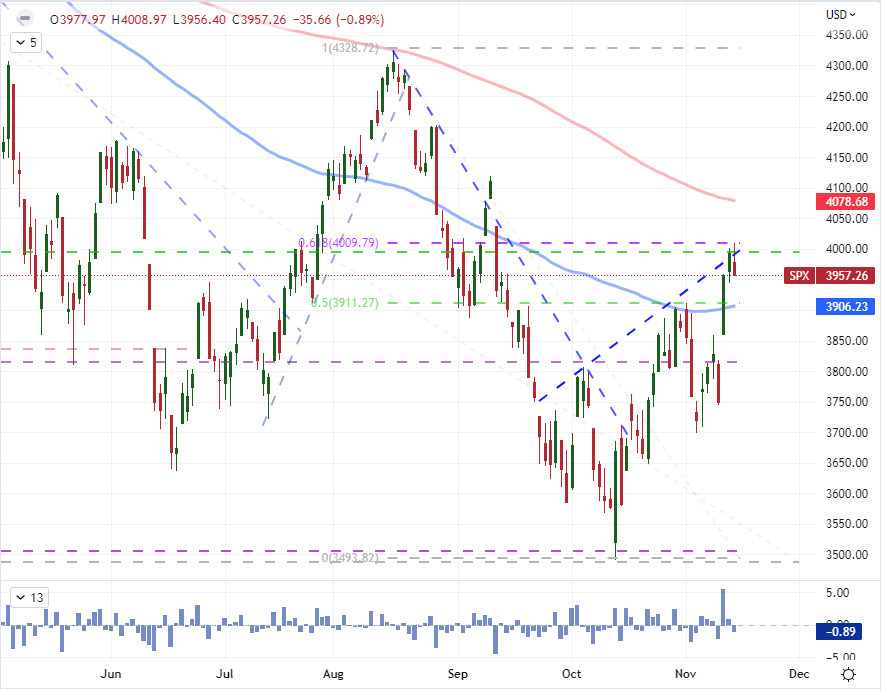 If the market’s were treating their fundamental drivers ‘symmetrically’, there was a Monday event that could have very well seized the imagination of speculators. The New York Federal Reserve released the results of the October results of its Consumer Expectations survey. While there was interesting data on expected consumption, financing and employment trends for the average American; a focus on inflation would have been reasonable given the response to the CPI release. And yet, despite a significant surprise form the survey data, the market all but ignored the figures. Notably, last week’s inflation report is far more recognizable, but it is also a lagging indicator with a surprise that belies the overall trend. In the NY Fed’s data, we are looking at expectations (forecast) that happen to reinforce an existent trend. Nevertheless, market response dictates price action. With little traction from the US Dollar after the report, I will be watching to see what takes up the mantle of Greenback motivation. 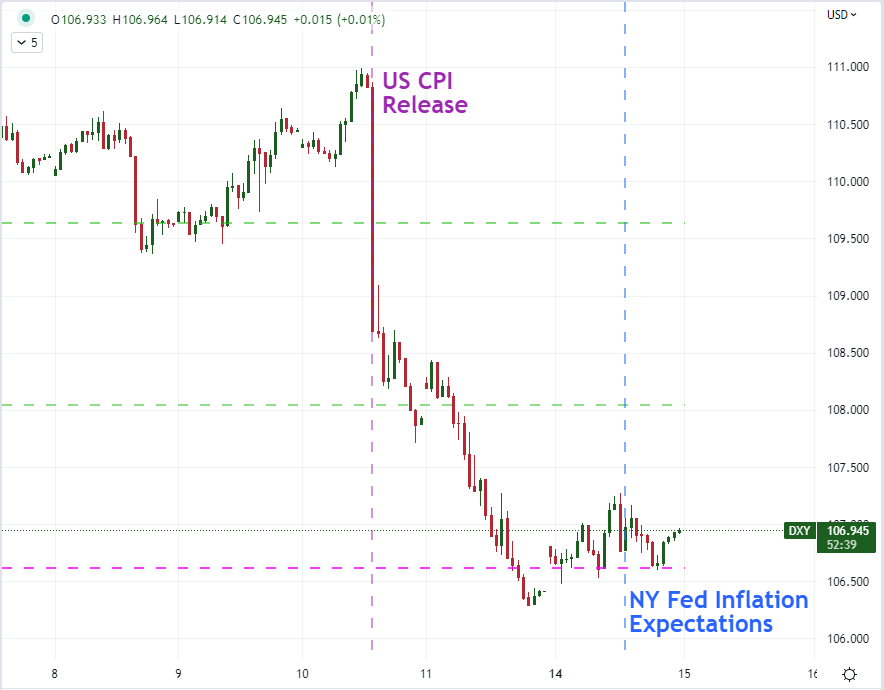 If we are in a position to monitor fundamental charges that can carry or turn systemic risk trends, it is worth watching for event risk that feeds into known matters while also keeping vigilance around headlines that speak to ‘possible’ threats to financial stability. When we are looking to sheer market potential, the unscheduled threats are perhaps the most potent because there is limited capacity for advance hedging. The troubles in the cryptocurrency market represent a distinct charge of uncertainty for the adventurous investors’ more speculative corner of their portfolio. The FTX implosion last week would exert further pressure on exchanges over the weekend, but there is yet to a similar level of extreme fallout. Smaller Asian crypto exchange AAX announced suspension of withdrawals for an estimated 7 to 10 days while Crypto.com said it was working on proof of reserves while its Coronos coin attempts to steady.

Chart of Relative Change in Past two Months of Bitcoin, FFT Coin and Chronos Coin (4-Hour) 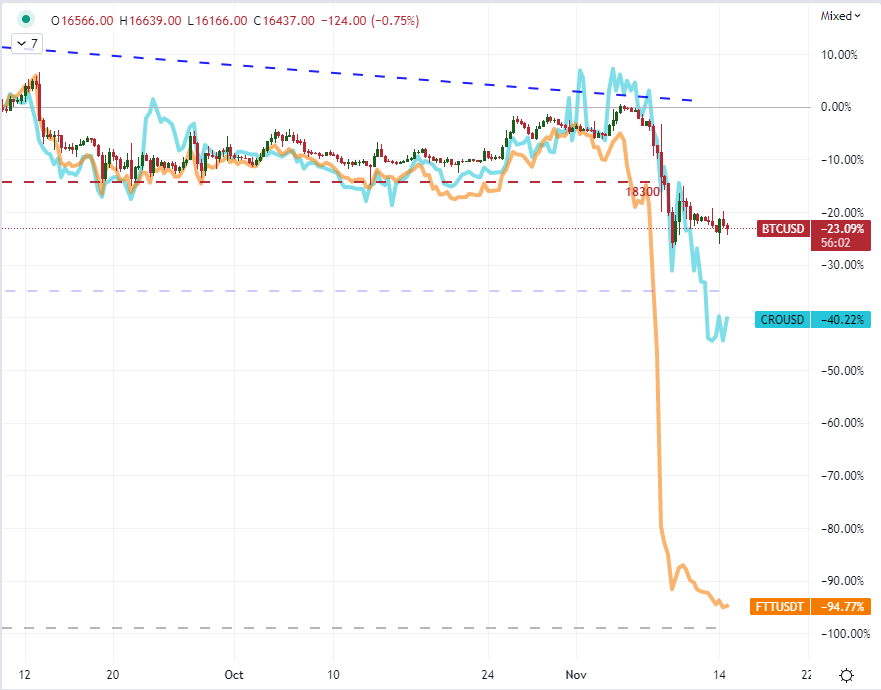 For more reliable guidelines on financial threats, we are technically due the European financial stability report and UK financial statement sometime this week; but I think those updates will not carry as much weight as the more dramatic moves being implemented in China. Following on the recent announcement that Covid quarantine protocols were being shortened in the country to soften the impact of the ‘zero Covid’ policy, a string of real estate-focused policies were announced over the weekend. This is a bid to stabilize an extraordinarily important segment of the world’s second largest economy, but it is not an outright rescue. With October data due for industrial production, fixed asset investment, retail sales and unemployment in Tuesday’s trade session; traders would do well to keep tabs on China. 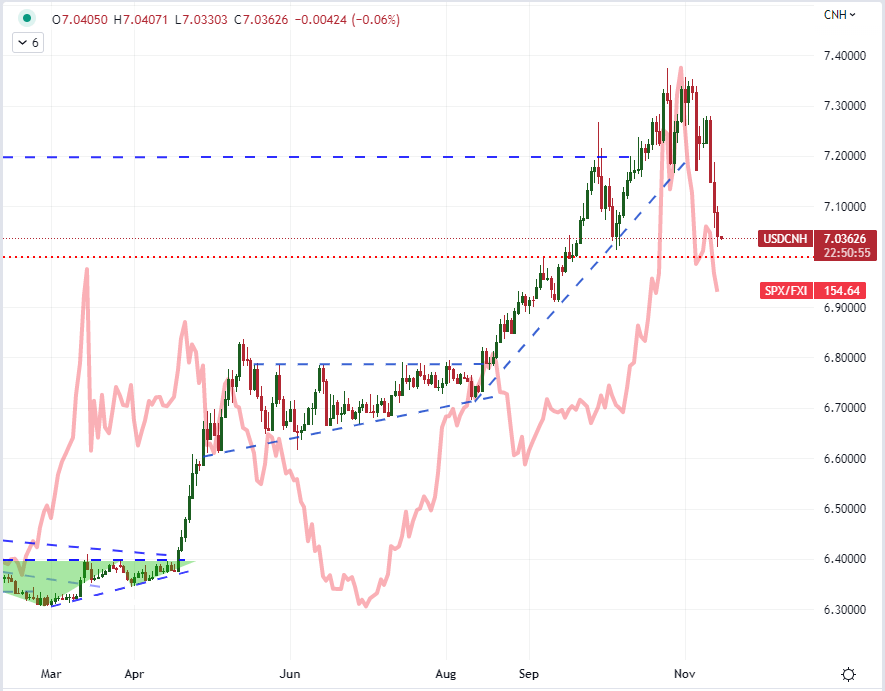 The unknown can exact a greater toll on market activity than the scheduled as it gives time to establish scenarios and probabilities. That’s why I am keeping close tabs on the Chinese financial system’s stability and more generally remarks from the G20 leaders summit. However, on the scheduled side of things, there is plenty of high profile event risk ahead. I’ll take in indicators like UK claimant count figures, US factory-level inflation and Eurozone economic sentiment. That said, the Eurozone and Japanese 3Q GDP updates are more remarkable in my book given they represent exceptionally large economies where officials have warned of economic retrenchment. In the US, the insight on economic activity will shift to pre-market earnings. Walmart is the 12th largest market cap company in the developed world and a reflection of both growth as well as inflation. This is an earnings report which it is worth applying a macro lens upon. 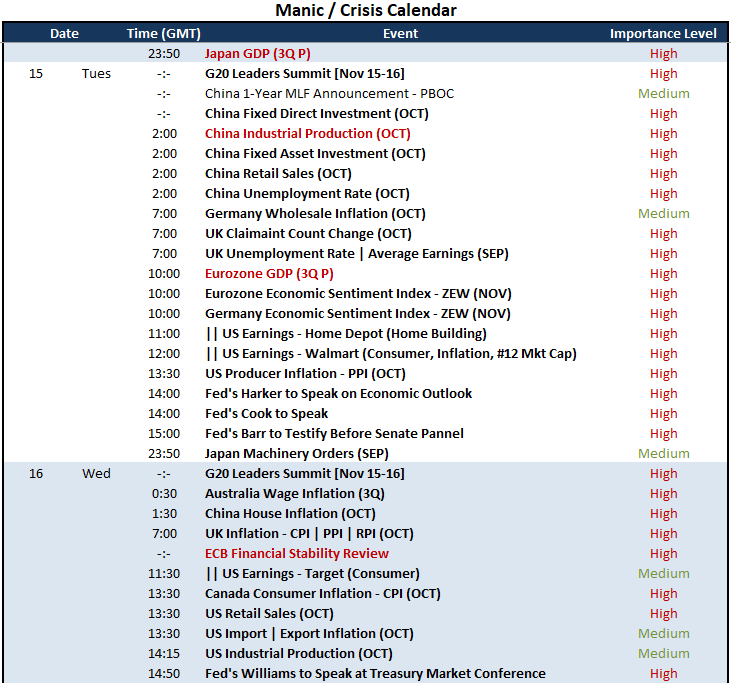