Nasdaq and Dollar Drop on Different Drivers, Prepare for a Lot More Event Risk Ahead

Nasdaq and Dow: A Wobble and An Erosion in Confidence

Looking at the benchmarks for risk trends – such as the major US equity indices – the general course of the markets these past weeks has reflected choppy progress higher. However, the climb may have more to do with the lull in systemically important event risk leading up to critical releases than it does with actual improvements in the current fundamental landscape. If we were indeed ‘coasting’ higher before the serious event risk came into view, the period of going with a controlled tide may soon be coming to an end. Already, we have experienced some serious chop from the likes of the Nasdaq 100 amid the slow release of FAANG earnings. Following the miss from Google’s earnings after the exchange close Tuesday, Nasdaq futures and the QQQs dropped significantly to Wednesday’s open. The -2.3 percent gap lower happened to coincide with the ultimate loss on the day after the tech-heavy index failed to ‘close the window’ (technician speak for covering the entire opening gap). The intraday bearish reversal resulted in the largest ‘upside wick’ since March 8th. Notably, the afterhours reaction to Meta’s (formerly Facebook) ultimately -20 percent afterhours drop seemed to spur a comparatively tepid reaction. Perhaps the markets are focused on the upcoming Apple and Amazon earnings reports or key macro updates ahead? 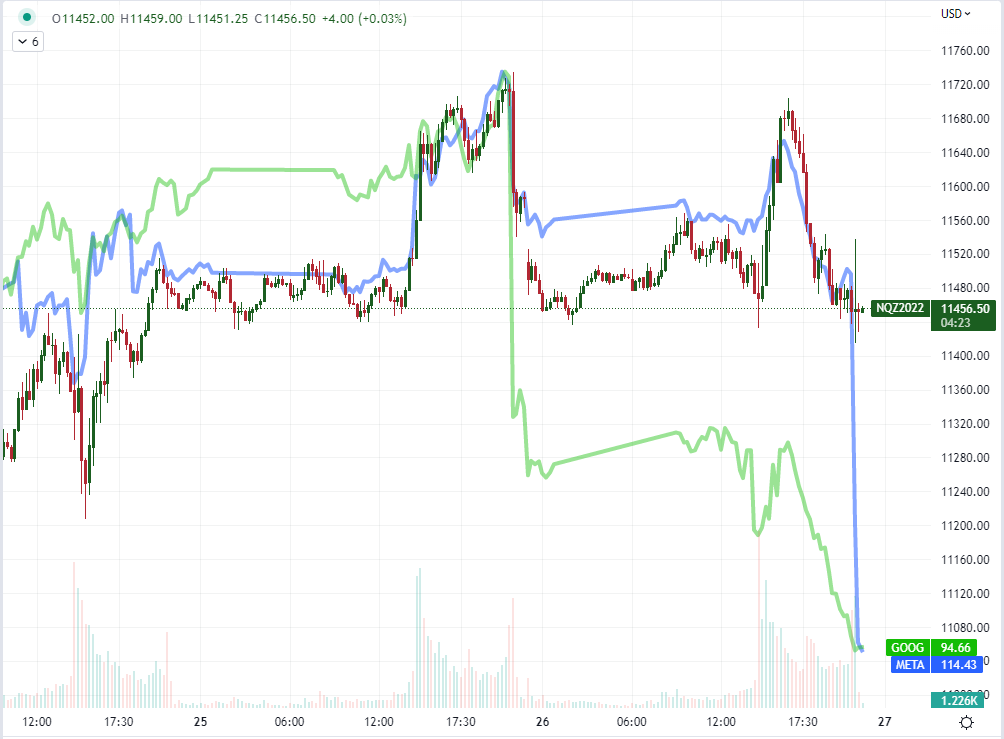 Anticipation can be a strong influence on the performance of the markets. This is particularly true when the outcome of previous event risk carries with it some degree of ambiguity and/or the weight of the future events is materially greater than that of the event risk previously reported. To control for some of the skew in anticipation, I find it useful to look at the comparison in performance between the Nasdaq 100 and the Dow Jones Industrial Average. Both are major equity indices with all the ‘risk’ implications with the added benefit of balancing the US focus. However, the NDX reflects more of a ‘growth’ measure relative to the Dow’s ‘value’ label. It is worth mentioning that the NDX-Dow ratio peaked this past December around the same level as the Dot-Com peak back in March of 2000. That said, the ratio extended its slide through this past session to push to its lowest levels since April 2020. 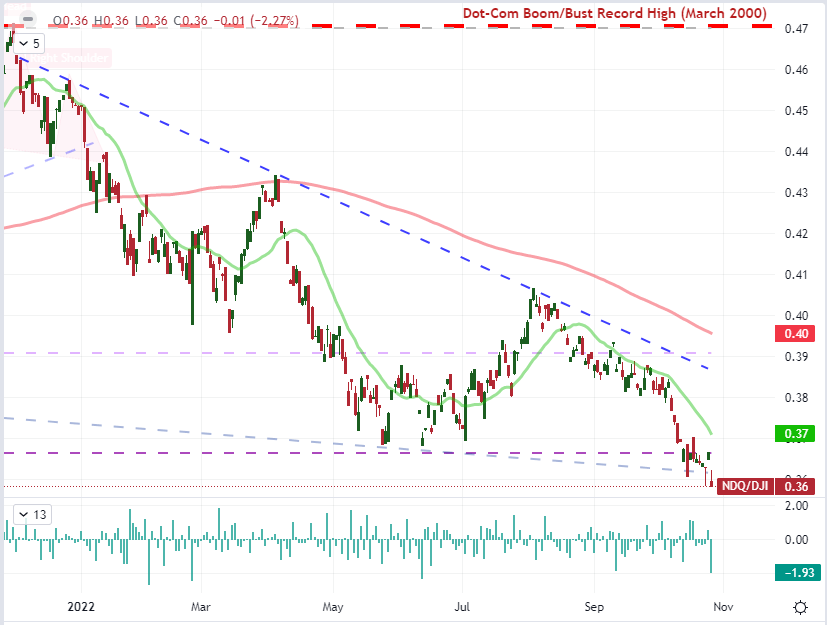 Event Risk Picks Up Significantly Ahead

I believe a big part of the frustration in the lack of momentum – or at least a temporary channeling of volatility – has to do with the greater level of anticipation for what is ahead versus the impact of what has previously crossed the wires. A quick look over the macroeconomic calendar shows the extent of what is populating the docket over through the close of the week. The listings are dense and their reference broad. There is a lot to wade through, but it there have been general priorities that we have seen around themes these past weeks and months. Recession risks, monetary policy trends, disparity in regional financial health and unique systemic liquidity threats are the general categories which I have noticed over time. If any of the listed (and unlisted) updates hits on any of these particular matters, it is more likely to generate a serious market response. 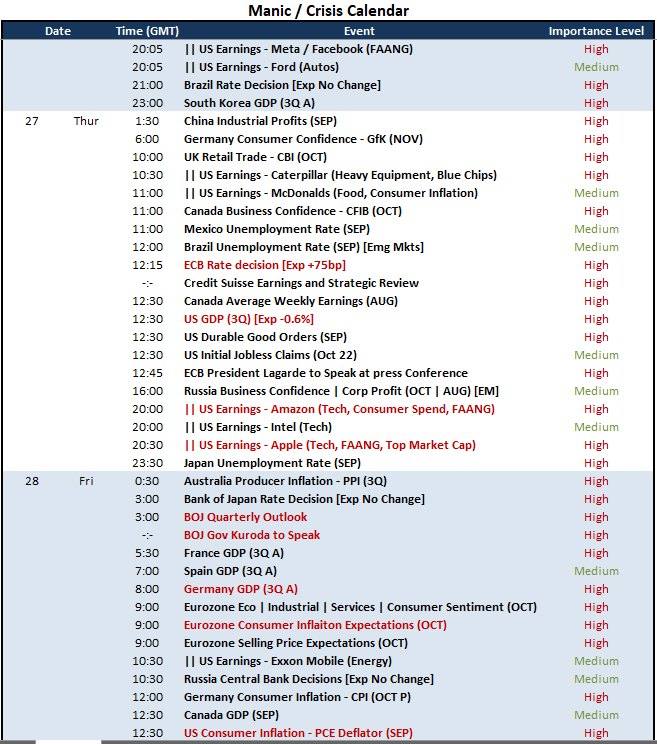 When evaluating fundamental trends, most roads eventually lead back to the general health of the economy. In other words, the probability and intensity of a recession represents one of the most comprehensive and abstract risks that we face. There is considerable sway in the performance of the world’s largest economy in dictating the assessment of the globe. That said, the data and forecasts have not been kind of late. The country’s housing sector was described as suffering a ‘recession’ by the NAHB, the Conference Board leading index has tallied a long consecutive string of declines, an NABE survey of CEOs just this past week reported two-thirds of respondents believed the country would soon enter (or is already in) a recession and just this past session the US 10-year / 3-month Treasury yield curve (economists’ preferred barometer) inverted for a ‘recession’ warning. We likely have an attentive crowd as to whether the 3Q US GDP meets, beats or misses the 2.4 percent growth economist consensus. 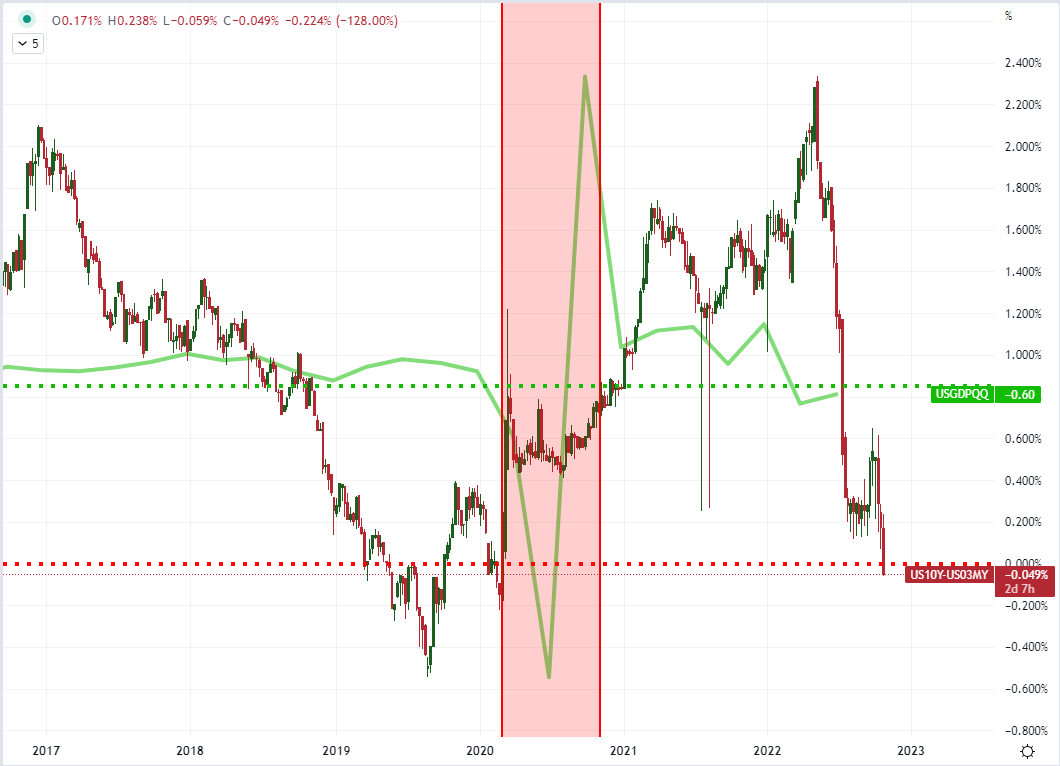 Yet, my belief on what carries the most fundamental weight over the long-term doesn’t matter much when it comes to dictating price action over the immediate horizon. That is a decision of the masses. Putting that question to the open market, I ran a poll on Twitter to get a sense of what retail traders believed was the most potent potential market-moving event ahead. Despite the scope of influence for the US GDP report, the critical nature of the forthcoming rate decisions and a laundry list of economic reports as well as scheduled events; the top designated event risk was the combination of Apple and Amazon earnings due after Thursday’s New York session close. Given the response to Google’s miss earlier this week, I can see the logic; but it should be noted there wasn’t much competing against that theme for market attention. The threat radar will be overloaded ahead.

Twitter Poll Asking About the Most Important Macro Event Risk Ahead 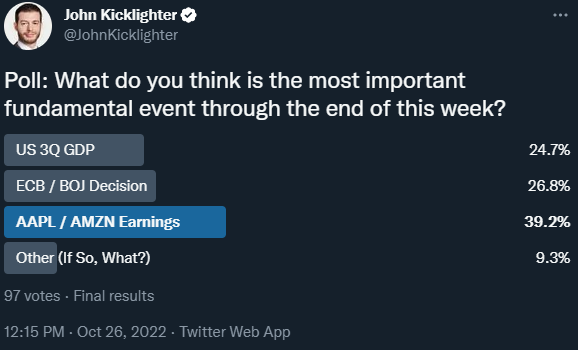 Speaking of rate decisions, there is good reason to highlight the big picture on monetary policy for the developed world. First and foremost, speculation around the Fed’s course will have to happen organically given the central bank is in its media blackout period until its announcement next Wednesday. The certainty of a fourth 75bp rate hike has perceptably ebbed. That seems to have something to do with the Bank of Canada (BOC) surprising markets with a ‘mere’ 50 bp hike this past session against a market consensus for 75. Given it is historically still a significant hike, there is a caveat to any disappointment. However, the hikes are still a significant contrast to the inert Bank of Japan (BOJ) who has been forced to response to the fallout of a relentless dovish stance (yield curve control) with impotent intervention efforts on behalf of the Yen. The recent pullback from USDJPY seems to have more to do with the Dollar’s ebb than any appetite for the Yen. We’ll see how that picture changes after the BOJ Friday morning. 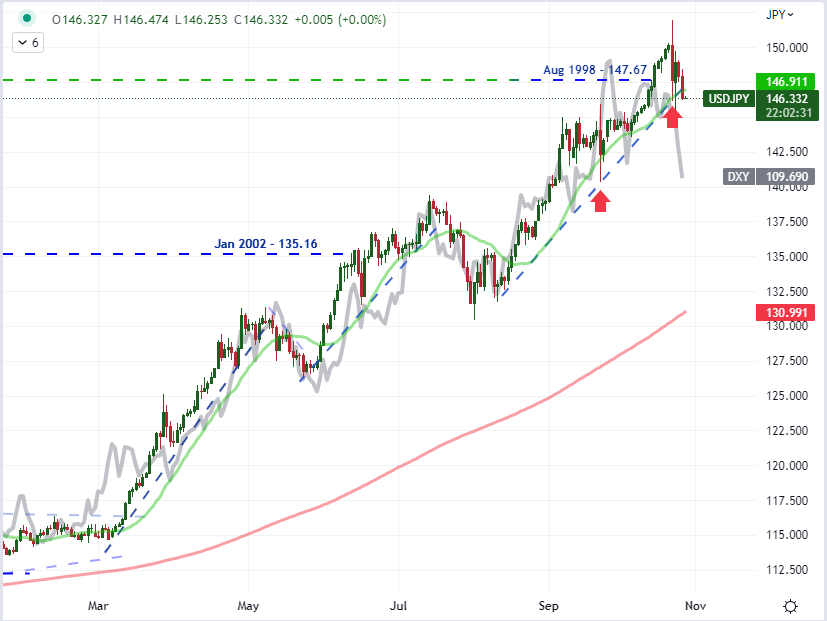 As far as influential monetary policy events go, the European Central Bank (ECB) decision due later today is the most important – and arguably the most highly anticipated for the week. The European authority is expected to hike 75 basis points at its meeting in a bid to catch up in its woefully delayed inflation fight. Any shortfall in that move would likely generate greater concern from the market as to something that is ‘wrong’ in the fundamental backdrop than any favorable perspective of a longer run of lower rates could garner. With a high profile break back above parity (1.0000) this past session on the back of a 5-day rally, the ante is high for speculative interests. 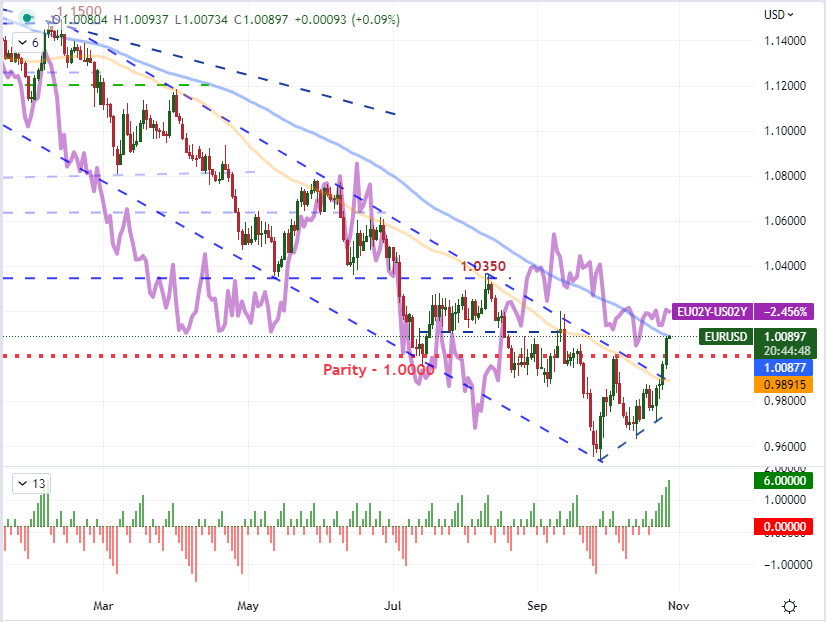