The Japanese Yen galloped higher in illiquid trading conditions early Monday morning on news of a possible shift in monetary policy objectives for the Bank of Japan (BoJ).

The Kyodo News agency reported on Saturday that Japanese Prime Minister Fumio Kishida is considering a more flexible approach to the 2% inflation target.

They cited unnamed sources about the review that appears likely to occur around the time when a new Governor for the BoJ is appointed in April 2023.

The BoJ currently have a policy rate of -0.10% and is maintaining yield curve control (YCC) by targeting a band of +/- 0.25% around zero for Japanese Government Bonds (JGBs) out to 10-years.

The BoJ and the People’s Bank of China are the only two major central banks to be maintaining a loose monetary policy. Most of the rest of the world is tightening financial conditions to deal with uncomfortably high and unstable inflationary pressures.

The BoJ will be meeting tomorrow but the market is not anticipating any changes at this stage.

Federal Reserve Bank President of Cleveland Loretta Mester reiterated the bank’s hawkish stance on Friday. She said that she saw rates needing to go higher to be restrictive and will need to stay there for quite some time.

He spoke about the importance of the ASEAN alliances based on defence, security, economics, politics and diplomacy. Japan announced that they would obtain ‘counter strike capabilities’ on Friday.

This comes on the back of reports that North Korea launched two medium-range ballistic missiles into the Sea of Japan on Sunday. The communist state has launched 90 missiles in 2022.

USD/JPY has been in a descending trend channel since making a peak at 151.95 on a day that the BoJ intervened.

Toward the end of last week, the price moved toward the upper band of the channel but was unable to sustain a move above it. The descending trend might continue to offer resistance, currently at 137.45.

That level is just below two breakpoints and the recent high in the 137.67 – 138.17 zone. This area may offer resistance.

On the downside, the 200-day Simple Moving Average (SMA) could provide support, currently at 135.65. 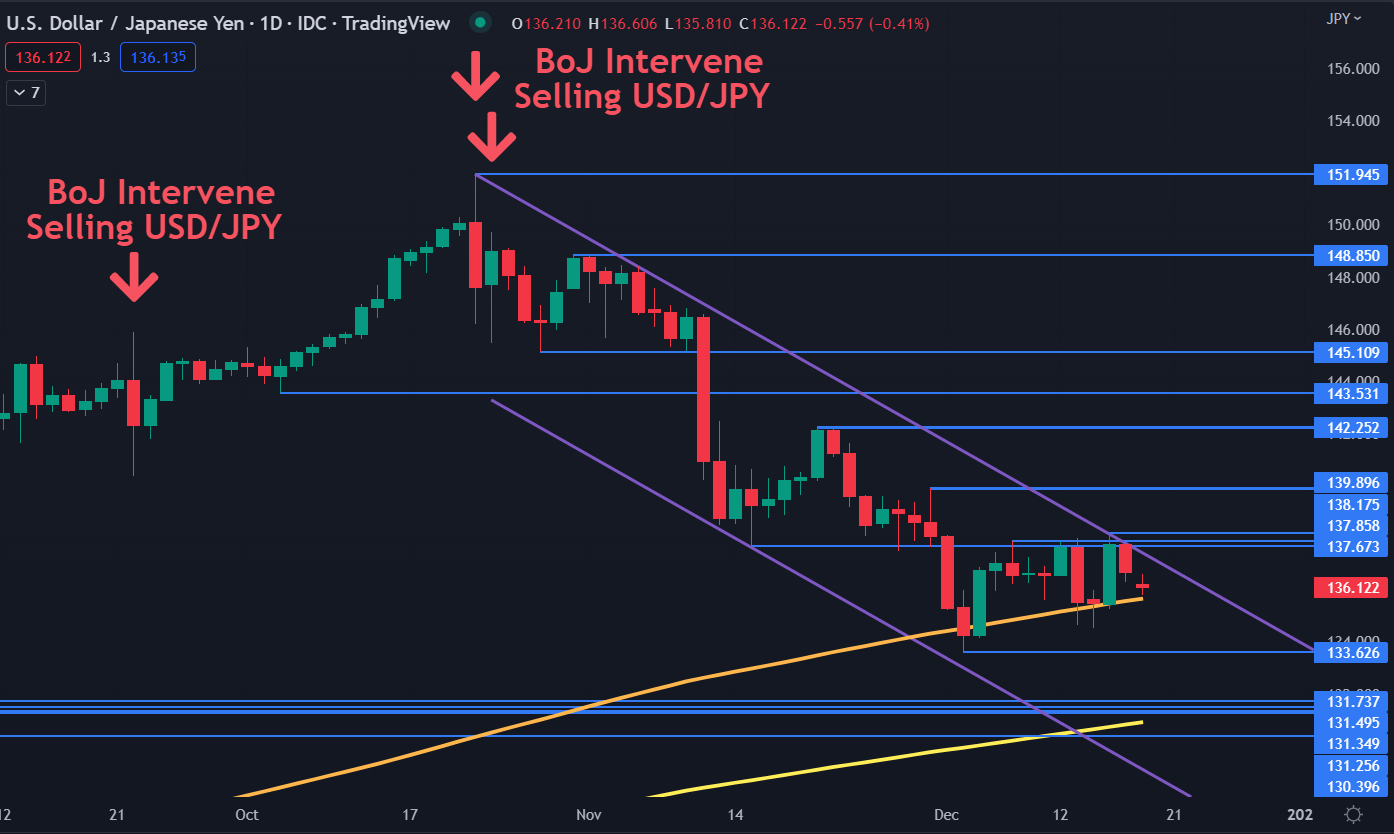