While this report’s focus leans more heavily on the technical analysis, it is only prudent to take into account the effect of recent dollar and Fed funds rate repricing this last week. On Thursday, strong jobs numbers from ADP data saw markets lift expectations of a possible 50 bps hike in February to around 45% resulting in a slight bid in the dollar. That of course was before the ISM services PMI data revealed that the largest sector of the US economy had just dipped into a contraction, immediately erasing prior dollar gains as the market repositioned once more, this time for a potentially more cautious Fed approach on the terminal rate.

The graphic below shows how quickly markets adjusted their thinking on Fed policy and ultimately, the dollar. Chances of a 25 bps hike went from 55% after the ADP numbers to 75% now, after the disappointing services PMI data. 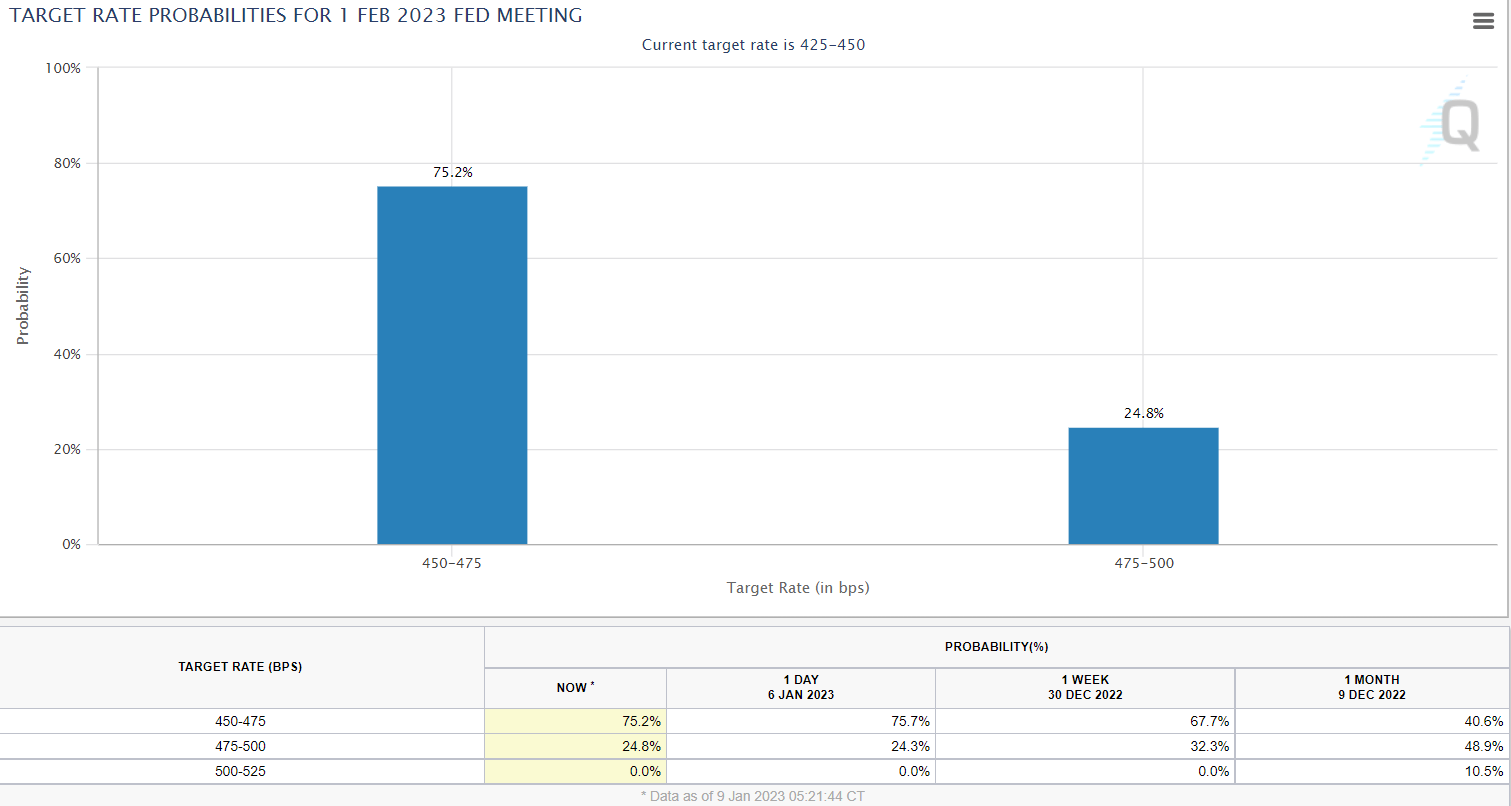 Silver has benefited greatly from the lower dollar and the general dollar sell off that we witnessed late into 2022. Now, with the reopening of China, the general metal complex receives a boost - something that silver has also witnessed to a degree. However, the technical landscape appears to be showing greater signs of waning bullish momentum.

Challenges to a bullish continuation can be seen by purple zone of resistance (24.90/25) which links multiple prior swing highs which sent prices lower, thereafter. Further signs of this strong resistance zone can be witnessed by the long upper wicks that have formed over the last few weeks. 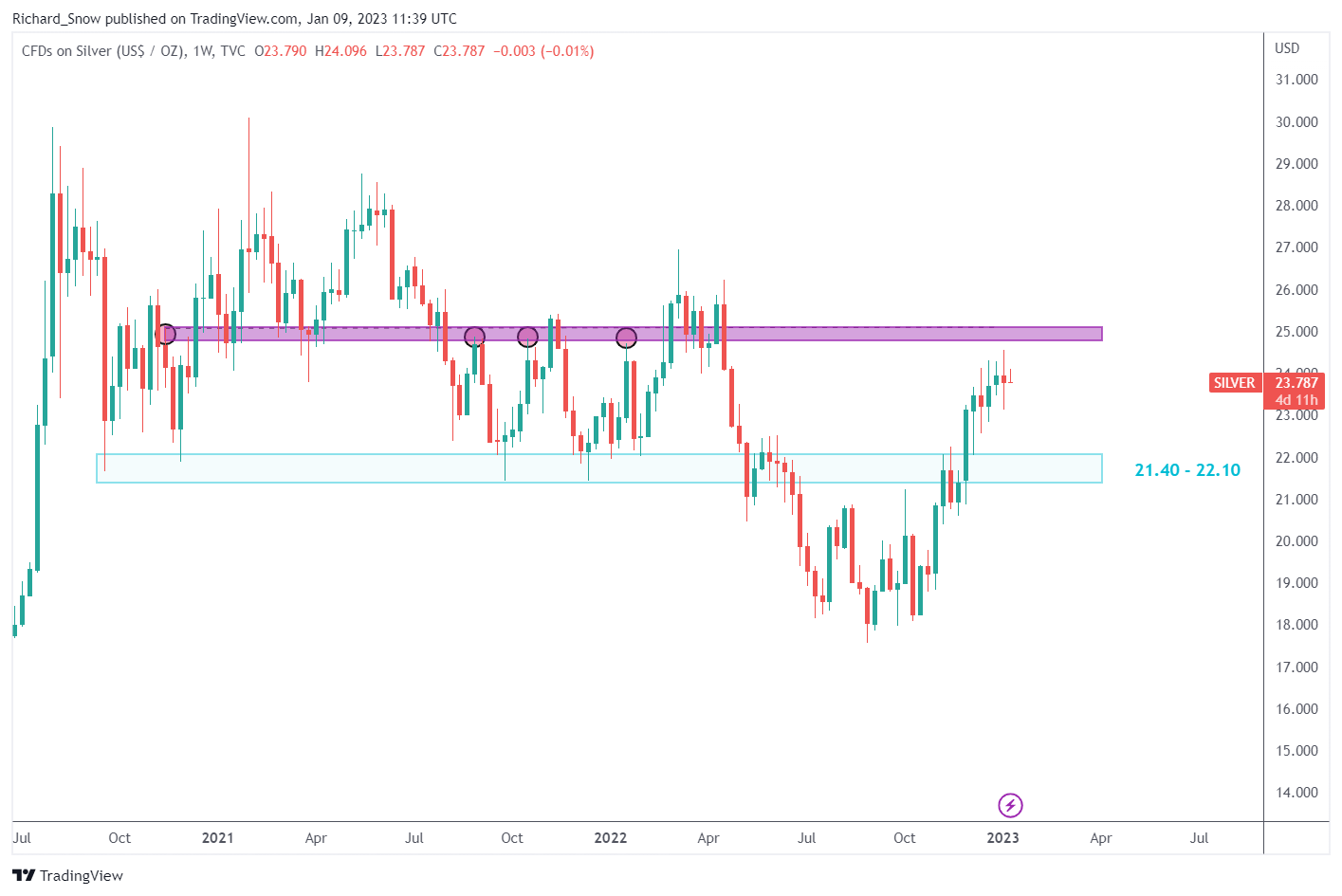 The daily chart also shows the rejection of higher prices in the form of higher upper wicks, most notably the recent swing high. The RSI has moved towards the 50 mark and momentum via the MACD indicator reveals the tendency for continued downward momentum.

Support rests at the June 2022 high and the December spike low near 22.55. Given the general lift in the metals complex, a potential pullback in silver may not extend all the way to that level before a bullish continuation comes back into play. 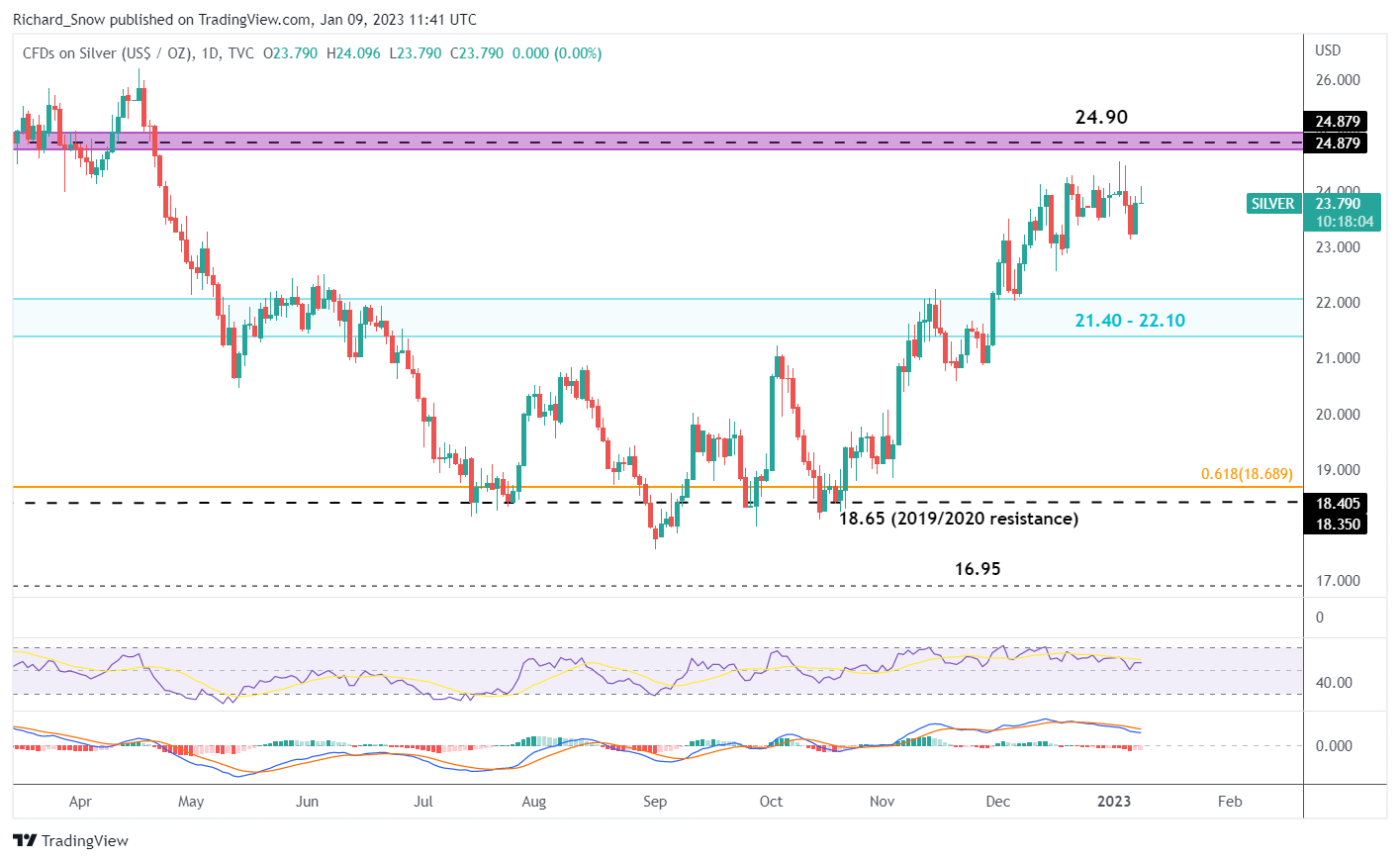 The weekly gold chart certainly looks a lot stronger than what has been seen in silver, particularly in terms of the magnitude of the recent advance. Much like silver, the recent advance now brings into focus be stern level of resistance at 1875 which has acted as a pivot point numerous times since 2021. 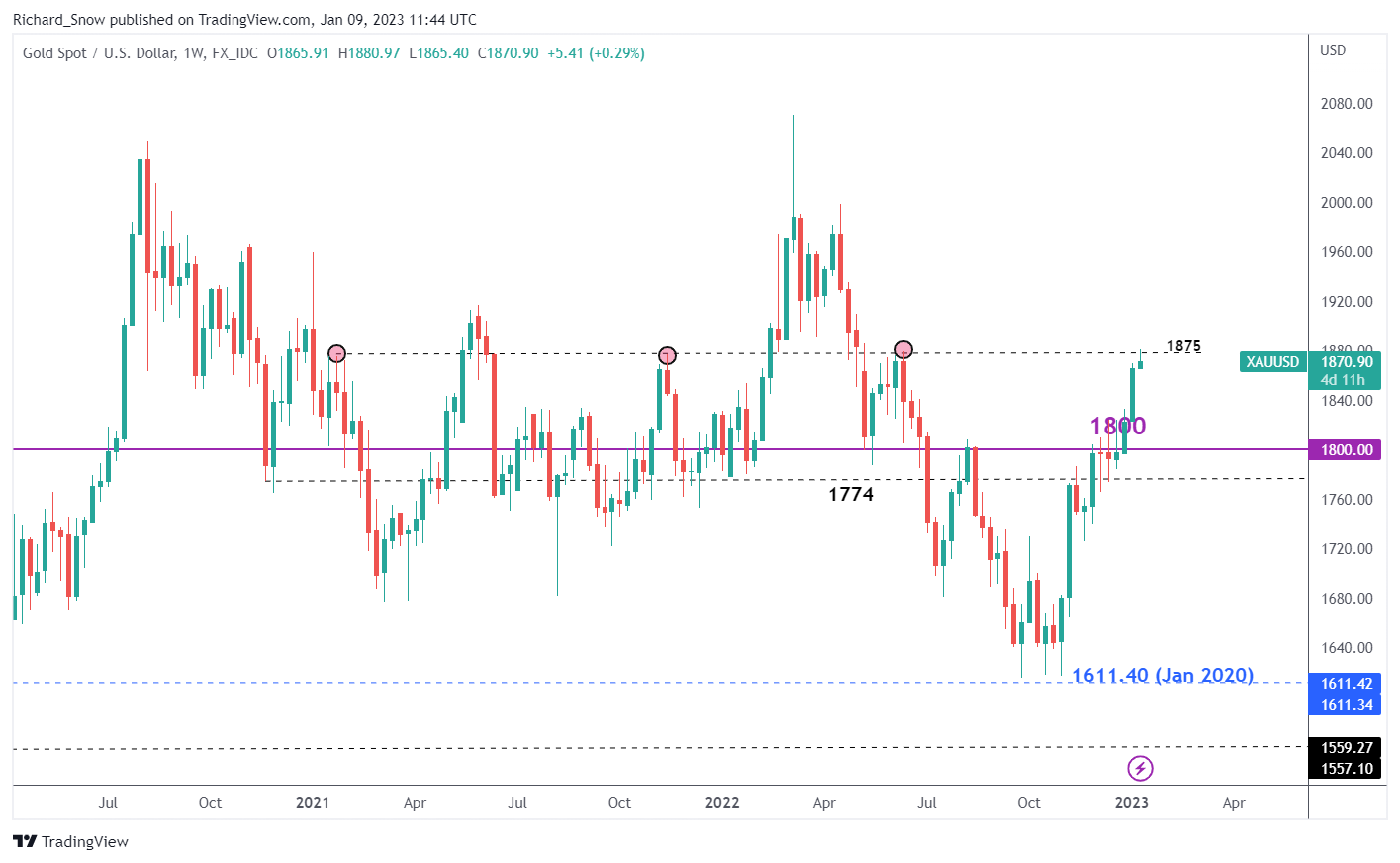 The daily chart shows the advance above the crucial 1800 level which had halted price advances previously. Thus far, the daily candle reveals a rejection of the 1875 level but there is still more trading to happen before such a conclusion can be reached. A conclusive break above 1875 brings the 1908 level into focus which happens to be the price of gold before Russia invaded Ukraine.

As mentioned earlier the advance in gold was rather fast and so the RSI is approaching oversold levels while momentum still favors the bullish price action. A rejection at 1875 could see a pullback towards the 50% Fibonacci retracement (of the major 2022 move) at 1841, with a deeper retracement back at 1800 flat. 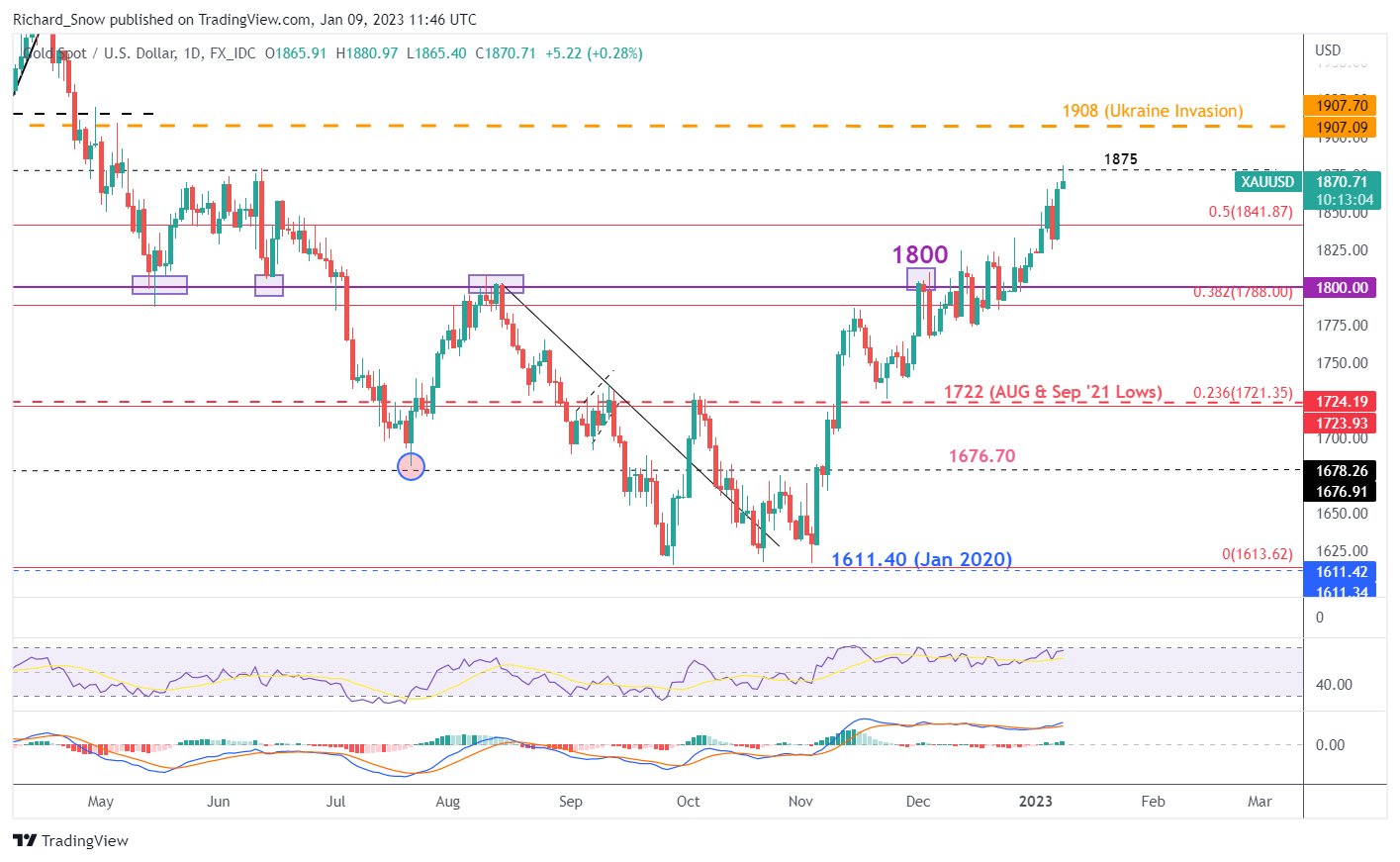