GBPUSD Soars as the Sunak Era Begins in the UK

GBPUSD soared on Tuesday as the Rishi Sunak era officially began at 10 Downing Street on Tuesday. Sunak is the United Kingdom’s third PM in just two months, and markets will be hoping that the Sunak administration offers a steady hand as Britain faces mounting economic troubles. Markets have embraced the announcement of Rishi Sunak as the leader of the Conservative party, as the Pound continues to strengthen and long-end gilt yields fall. Eyes now shift to the budget proposal due at the end of the month, as well as the upcoming Bank of England meeting on November 3rd.

In his first speech as Prime Minister, Sunak vowed to fix the errors of the departing Truss administration, while also hinting that “difficult decisions” are to come. Sunak also made it clear that he wishes to restore credibility and trust in the government, saying “I understand too that I have work to do to restore trust after all that has happened.”

Following the events of this morning, which included a game of musical chairs regarding cabinet positions, the cable rate made a strong advance into the 1.15 area. Broad dollar weakness exacerbated the move in Sterling, as US Treasury yields continue to walk back some of their recent advances. These declines come as markets are opening up to the idea that the November 2nd FOMC meeting may be the last 75 basis point rate hike from the Fed. While the economic data may not suggest this is the case, recent Fedspeak from San Francisco Fed President Mary Daly has caused market participants to question if the Fed may start to slow down as it enters restrictive territory. 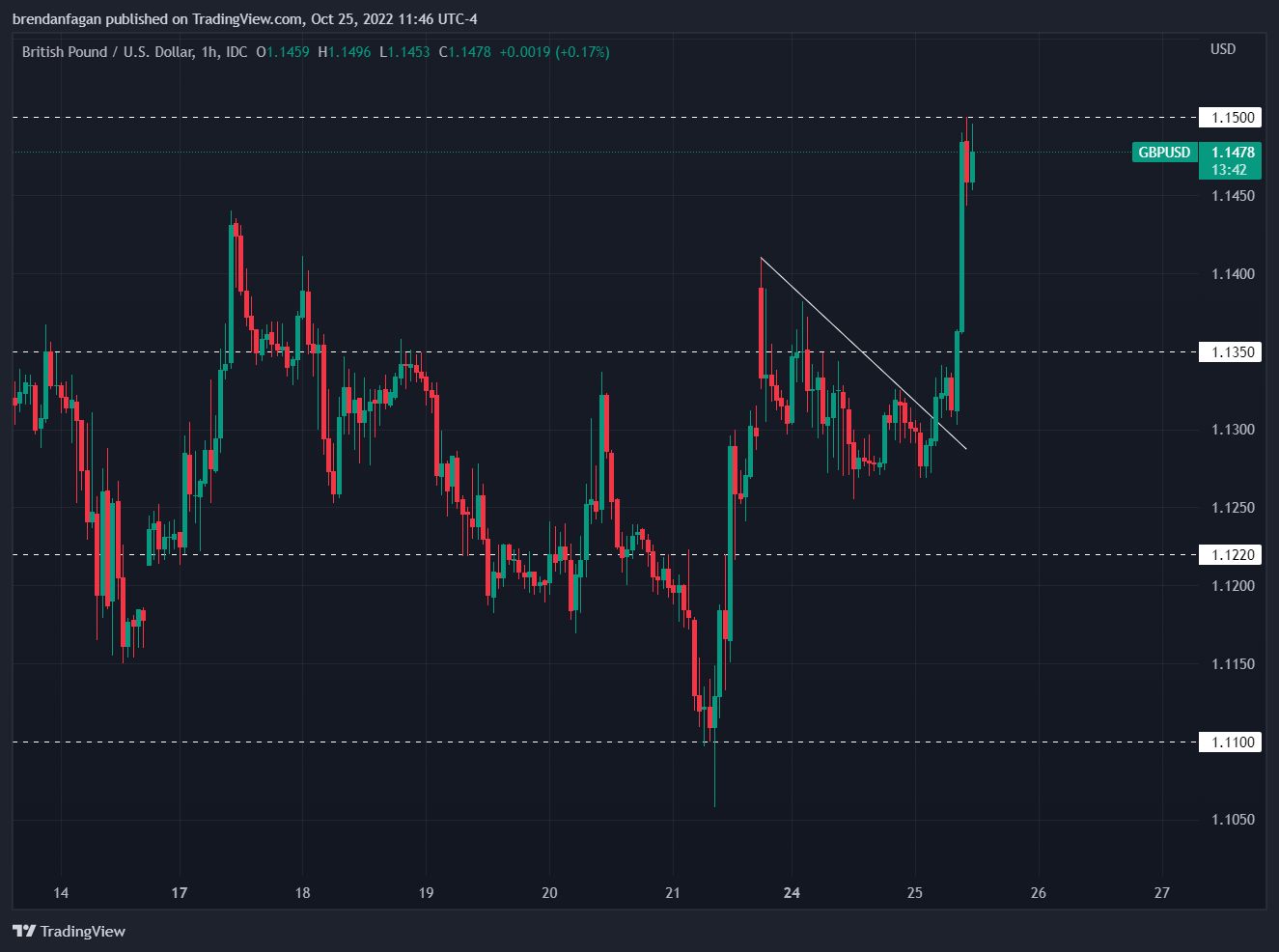 GBPUSD was able to break above trendline resistance in the early hours of Tuesday before making a stunning break above the 1.1350 area. Recent changes in government in the UK have offered support for UK assets, as markets see new leadership as more of a “steady hand.” Despite this, major fundamental challenges still face the UK. Persistent inflation has the Bank of England aggressively pushing ahead with rate hikes and QT despite the hiccups in financial markets over the last few weeks. The cost of living crisis continues to be top of mind for government officials and their constituents, and pressure will continue to mount on the BoE to quell these fears. 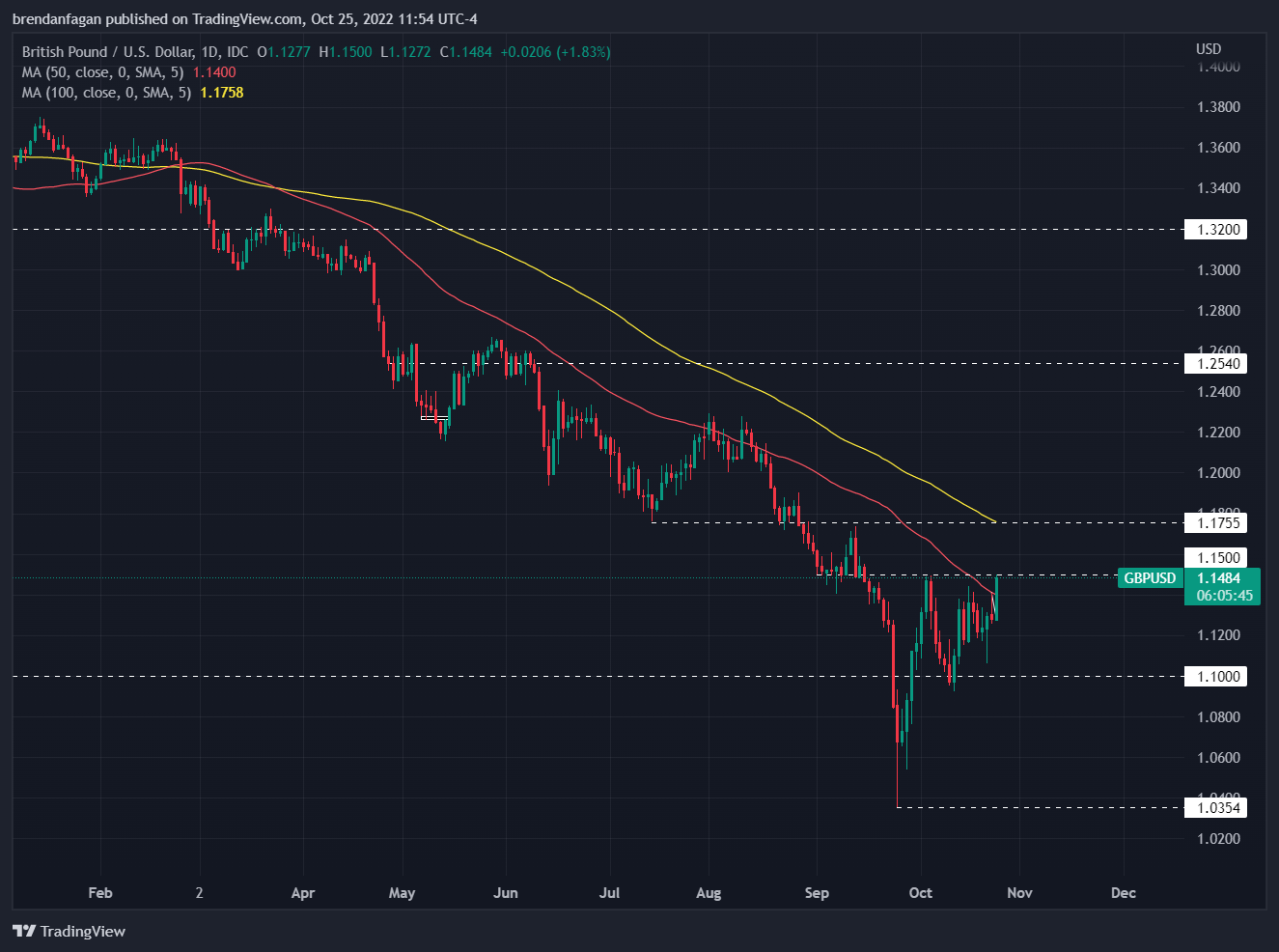 When we back out to the daily timeframe, we can see that GBPUSD has put the “flash crash” in the rearview mirror. Price has firmly rebounded, initially on a massive rally into the 1.15 area that then retraced to 1.10. As domestic affairs have certainly cooled, cable has traded back up to the 1.15 area on the back of renewed USD selling. Tuesday’s rally has seen GBPUSD trade back through the 50-day moving average for the first time since August, a reflection of upbeat price action in recent sessions. If bulls can break the ceiling at 1.15, the 100-day MA sits above around 1.1755, which coincides with the July swing-low.