Recommended by Cecilia Sanchez Corona
Forex for Beginners
Get My Guide

The arrival of the new UK Prime Minister Rishi Sunak has given a sense of stability to the local financial markets after he announced the abandonment of the expansionary fiscal policy suggested by his predecessor Liz Truss. However, the outlook for the GBP/USD remains bleak as investors await the FOMC and BOE monetary policy decision this week.

The reversal of the Truss tax cuts, which initially triggered volatility in the UK Gilts market and subsequently led to GBP depreciation, has temporarily given investors a sense of relief. But while the new administration is considering raising taxes in an effort to plug the fiscal deficit, markets remain cautious as the UK economy is already showing clear signs of a slowing at a time when price pressures continue to grow.

For context, the latest GDP figure showed that the UK economy contracted in the month of August, while the inflation reading for September returned to the 40-year high previously hit in July, also exceeding expectations for a +10% y/y increase. The largest contributions to price pressures continued to come from food and energy, with these items showing no signs of easing in the near term.

Over the weekend, it was reported that Russia withdrew from the grain deal negotiated by the United Nations in July, which would now put further pressure on food prices, as Ukraine and Russia together account for nearly one-third of global wheat exports. In the same vein, today the UK meteorological office warned of a colder than usual winter of 2022, which will also highlight the risk of energy shortages and further oil price rises.

In this environment, the Bank of England will face a difficult decision at its next monetary policy meeting on November 3, a day after the FOMC is expected to tighten monetary conditions further. Although investors are anticipating a 75-basis point hike by both central banks, fundamentally speaking, the U.S. economy is in much better shape than the UK economy, so one would expect further US dollar strength against the pound. However, if the BOE surprises with a 100bp-rate hike, the GBP could appreciate in the short term.

From a technical standpoint, during the past few days GBP/USD has been consolidating as investors await major risk events during the week. However, the psychological level of 1.1500 has been breached today and a low of 1.1460 has been recorded at the time of writing as risk appetite receded. On the daily chart, first resistance is seen around 1.1645. If broken, it opens the door to the next key area at 1.1710-1.1725, which converges with the 100-day moving average. To the downside, 1.1410 zone comes into play as a support level. Below that, 1.1350 could come next. 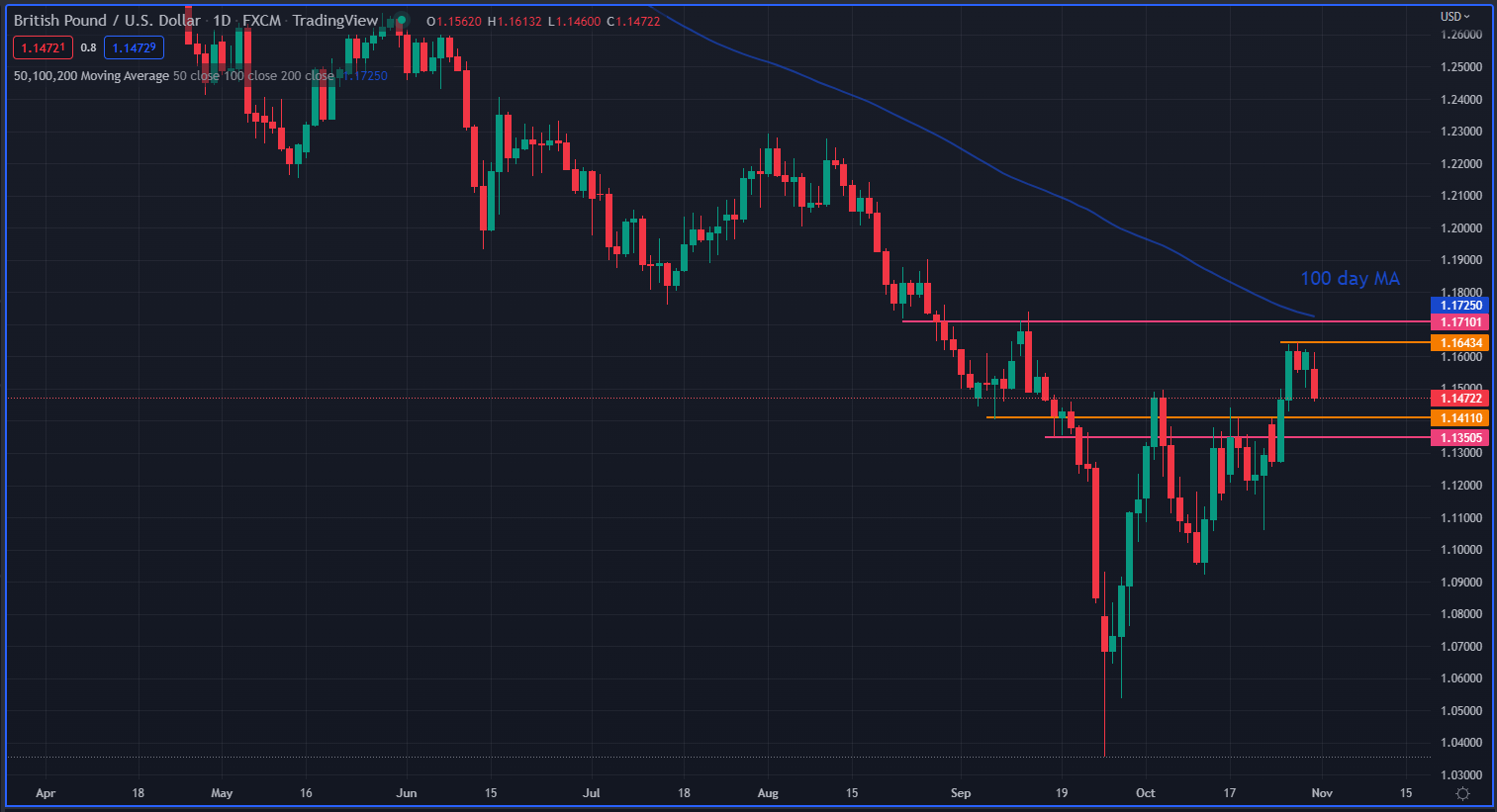 Looking ahead, the UK and US Manufacturing PMI are expected to be released tomorrow. The FOMC will decide on interest rates on Wednesday where the press conference will be of great importance as investors look for signs of a slower pace of tightening. Thursday will be the BOE’s monetary policy decision before we have a better understanding of the US economy with the release of ISM Services later that day and unemployment and US NFP numbers on Friday.

DailyFXprovides forex news and technical analysis on the trends that influence the global currency markets.