Recommended by Nick Cawley
Download the Full GBP Q4 Forecast!
Get My Guide

After months of prevaricating, avoidance and denial, Boris Johnson was finally forced from his job as UK Prime Minister after just over three years. His successor, Liz Truss, is just getting used to No.10 Downing Street but is already facing a host of problems that her predecessor was unable to fix. The cost of covid, soaring energy prices, rampant inflation, insipid growth, and the ongoing Brexit rancour especially over Northern Ireland protocol, are just some of the headaches facing the PM and all of them need to be solved, quickly.

Has Headline Inflation Peaked in the UK?

UK inflation turned lower in August, and back into single-figure territory, for the first time in nearly one year. Energy prices, the main component of soaring price pressures, abated and look to go lower still over the medium-term after the new PM announced a two-year cap on domestic energy bills. According to the Centre for Economic and Business Research (CEBR), this policy will have a ‘sizeable impact on inflation’. The CEBR forecast inflation of around 11% in October, which should then slow in January, with the policy ‘taking around five percentage points of the expected CPI inflation for early 2023’. The CEBR also see the additional money in consumers’ pockets limiting any economic slowdown in 2023. Not something that will affect Sterling directly in Q4, but sometime in 2023 there may be a little light at the end of the tunnel. 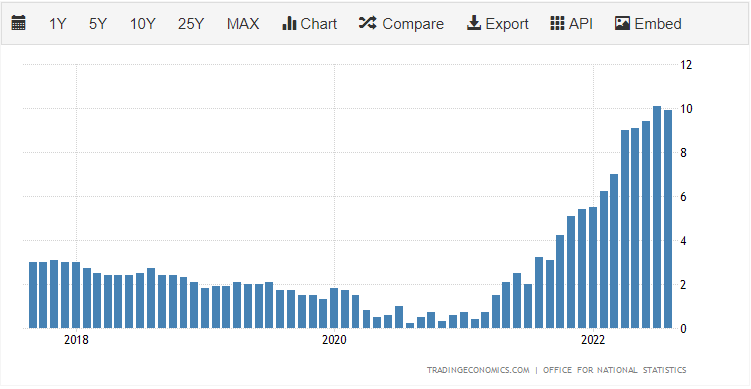 The UK Chancellor Kwasi Kwarteng’s recently announced ‘mini-budget’ contains a host of new tax cuts and cancellations of previously announced tax increases. Income tax will be cut to 19% from April next year from 20%, the 45% tax rate for highest earners has been scrapped, the planned rise in corporation tax to 25% from 19% has been cancelled, while the recent rise in National Insurance will be reversed from November 6. The Chancellor is hoping that these measures, amongst others, will help to re-invigorate the UK economy and boost growth at a time when the UK is seen as entering a recession. While these measures are welcome, there is a cost to pay and this will hit financial markets, especially the UK gilt market. The package is said to cost GBP45 billion and when the energy rescue scheme is added, the total cost added to the UK balance sheet is around GBP105 billion. The gilt market will bear the brunt of this cost, at a time when the UK is already looking to sell some GBP80 billion a year of UK gilts already on its books, and when interest rates are being hiked ever higher to temper inflation.

The increased UK economic uncertainty is visible in the British Pound which is slumping across the board, notably against the US dollar where GBP/USD is trading at a near four-decade low around 1.1100. EUR/GBP is trading at an 18-month high of 0.8825, while GBP/JPY changes hands around a four-month low despite the Bank of Japan’s ultra-accommodative monetary policy. The British Pound is likely to weaken further but there will come a time soon, maybe in Q4, when Sterling starts to offer longer-term value and further losses are stemmed. It’s never easy, or advisable to try and pick the bottom of the market as they have a habit of trading against you. Sterling lows may be near, but where these lows actually are remains the million-pound question.