USD/JPY continued its decline from the Asian into the European session following the Bank of Japan’s unplanned bond purchase operation, the second in a day. The Yen is looking to snap five days of losses against the greenback.

The Bank of Japan announced an unplanned bond buying operation for the second time in a day as it attempts to cap yields. The Central Bank has offered to purchase unlimited amounts of and 2- and 5-year notes as well as a daily offer to buy 10-year debt at 0.5%. The BoJ is facing a growing challenge as it plans to increase scheduled bond purchase in Q1 2023 by 23%. Markets have been hoping the BoJ would lift the cap on yields even further which has pushed the Central Bank into action with further tweaks expected by the Central Bank as 2023 begins. 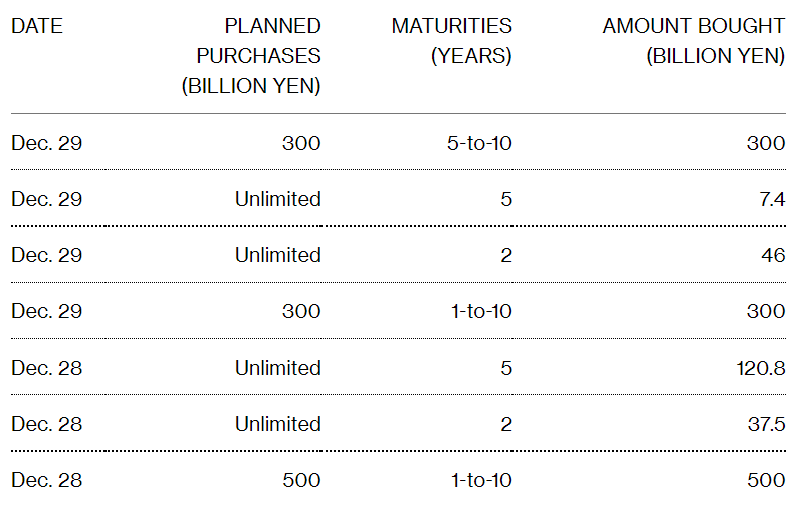 The US dollar index remains within a tight range this week, trading between 103.80 and 104.60 and remains down for the month. The dollar remains on course for another December of losses, in line with its seasonal trend. The dollar could find some support as geopolitical tensions and the ban on Chinese travelers continue to escalate. A host of countries have now announced rules for incoming travelers from China, including India, Malaysia, Italy and the United States.

A quiet day ahead on the calendar front with initial jobless claims the major data release for the day which could inject a bit of volatility during the US session.

From a technical perspective, USD/JPY has posted 5 consecutive days of gains with the pair now approaching the descending trendline. We have seen a golden cross which would hint at further downside in prices with the 200-day MA resting just above the descending trendline around the 136.00 handle. Given the thin liquidity and lack of catalyst I do not see a break of the trendline happening this week while a new low also seems highly unlikely.

IGCS shows retail traders are currently SHORT on USD/JPY, with 58% of traders currently holding short positions. At DailyFX we typically take a contrarian view to crowd sentiment, and the fact that traders are short suggests that USD/JPY may continue rise.