Hawkish Fed Speak Could be Losing its Effectiveness

On Monday, James Bullard, one of the Fed’s well-known ‘hawks’ warned that market expectations of a lower terminal rate and a more accommodative Fed appear misguided as the Fed has “a ways to go” on interest rate hikes. Bullard remains focused on the terminal rate of 5.00% - 5.25% with the rate currently at 3.75% - 4%. There was a definite rise evidenced by the intraday move higher, but the longer lasting impact of the hawkish rhetoric appears to be waning as the dollar index trades lower today.

Markets now await Jerome Powell who is due to speak at 18:30 GMT today. Since the early November Fed meeting, it appeared as if the Fed Chairman had acquiesced to a growing number of doves within the Fed who favor a slower pace of rate hikes in the future.

The dollar, via the US dollar index (DXY), shows just how impactful inflation data has been when driving USD price action. The green rectangle reveals the bullish advance and aggressive repricing of the dollar after the September CPI beat when the market was positioned for a softer print. That culminated in a peak in DXY just before the final Q2 PCE print of 7.3%.

The rise that ensued after the advance print for Q3 PCE data coincides with the October ECB meeting which saw the euro appreciate – the Euro makes up 47.6% of the dollar index. Finally, the welcomed, cooler CPI print of 7.7% saw the dollar selloff rather aggressively, shooting below 110.30 and 109.30 with ease. Markets will keep an eye on tomorrow’s second estimate for any material divergence in the updated data. Major support at 104.90 followed by 103 (March 2020 high). To the upside, levels of resistance appear at the recent lower high of around 108.15, followed by 109.30.

A sizably stronger print could see a continuation of the brief Bullard-inspired rally, while a substantially lower second estimate can see a continuation in dollar selling, with the recent rise offering more attractive entry levels. 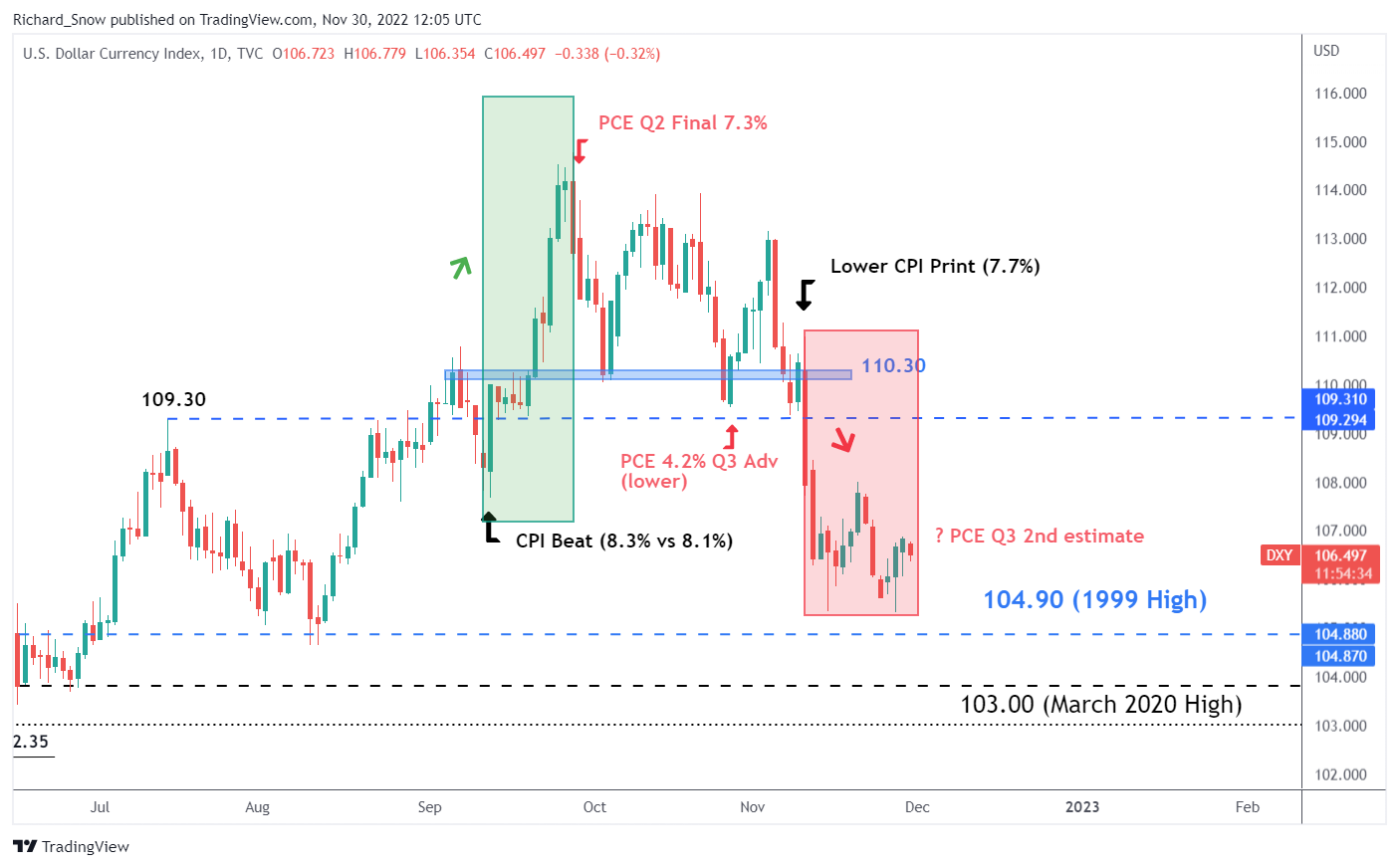 Tomorrow kicks off with US PCE data, the second estimate which remains one of the markets biggest focus points. Estimates tend not to deviate too much from prior prints but given the large and unexpected moves in inflation – particularly when assessing the massive miss in the November CPI print – nothing should be taken for granted.

Towards the end of the week ISM manufacturing figures for November are due to show a dip into contractionary territory, however, positive GDP data forecast by the Fed using its GDPNow forecast tool suggests that the US economy is likely to bounce back strongly after the Q1 and Q2 contractions, adding to the Q3 expansion. Most of the positive news of the potentially better GDP data is more likely to appear next week in the non-manufacturing (services) data but be on the lookout for positive spillover effects into manufacturing.

Then on Friday we have the US NFP print where once again the economy is expected to have added jobs in November, with the number at 200,000 additional jobs. It must be noted that the 200k additional jobs, while positive, represents the lowest rate of job growth for 2022 and could add further to the fact that the labor market is due to loosen as financial conditions tighten.