The Canadian Dollar continues to display resilience against the greenback in the face of hawkish comments from US Federal Reserve policymakers as dollar bulls remain cautious. The upside rally following the Fed comments failed at around the 1.3400 level before declining 100-pips heading into the European session.

Yesterday’s rally higher for the pair was sparked by comments from Federal Reserve policymakers, with James Bullard’s comments the most notable. The St. Louis Fed President stated that interest rates need to climb to at least 5-5.25% to see a notable impact on inflation while warning of further financial stress in the months ahead. Bullard is the latest Fed policymaker to follow a hawkish rhetoric this week, yet the dollar remains uninspired thus far. Economic data releases from the US seemed to support the view of policymakers as weekly jobless claims beat estimates yesterday confirming the strength of the labor market.

The Canadian Dollars resilience is somewhat surprising given the decline in WTI prices this week. The strength of the Loonie could be attributed to rising peak rate expectations following the Canadian CPI data released earlier in the week. The CPI print came in at 6.9% in line with expectations, however inflation seems to be seeping into a wider variety of sectors which is a cause for concern. This continued spread of inflationary pressure across sectors is likely to keep further rate hikes by the Bank of Canada on track with the peak rate expectation remaining around 4.25%. Markets are still pricing in a 50% probability of a 50bp hike at the Bank of Canadas upcoming meeting on December 7. 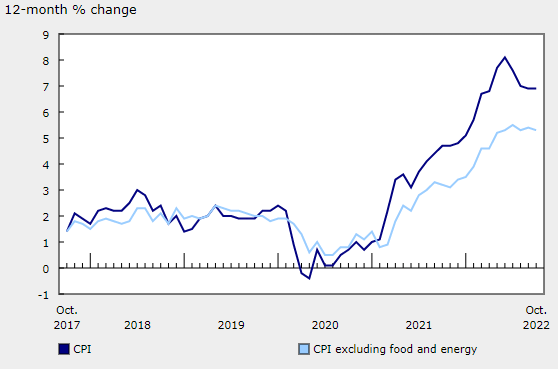 USD/CAD has struggled to sustain any meaningful push higher as evidenced by yesterday’s daily candle close. The huge wick to the upside is indicative of the selling pressure still evident in the pair.

Given the significant support around the 1.32500 (previous channel breakout) and the 100-day MA an upside push cannot be ruled out. Any such move would require a return of dollar bulls which at this stage remains elusive. A break below this key support area could see a retest of the 200-day MA around the 1.30000 Psychological level.

The pair still remains on course to snap a four-week losing streak with a bullish candle close on the weekly timeframe which could result in a push higher as we start the new week.