Gold has staged a comeback this morning wiping out yesterday’s losses. The precious metal has rallied from lows around $1740 to trade above the $1750 psychological level as dollar weakness returned. The haven demand which boosted the greenback has taken a backseat this morning as optimism around China returned as Covid case numbers declined for the first time in five days.

Sentiment around China received a boost overnight as Covid cases dropped to 38,600 compared to 40,400 a day ago. Chinese officials also walked back a ban on equity refinancing for listed property firms with the Chinese Securities Regulatory Commission (CSRC) stating it would broaden equity financing channels, including private share placements for China and Hong Kong-listed Chinese developers, lifting a ban that has been in place for years. Rumors were swirling overnight that a relaxation of Covid protocols could come sooner rather than later but this has yet to be confirmed. Such a move would no doubt boost gold and could see it break higher should sentiment improve, and dollar weakness intensify.

Federal Reserve policymakers renewed their hawkish rhetoric yesterday with comments from Bullard, Williams and Brainard keeping investors on their toes. Bullard stated that markets may be underestimating the likelihood of higher interest rates with all three in agreement that upside risks to inflation remain. Fed Chair Powell is scheduled to speak tomorrow with expectations that he may signal a slower pace of rate hikes, but yesterday’s comments may give market participants something to ponder. In light of the hawkish comments by Fed members the probability of a 50bps hike in December declined to 66% from 75% (currently 72%). 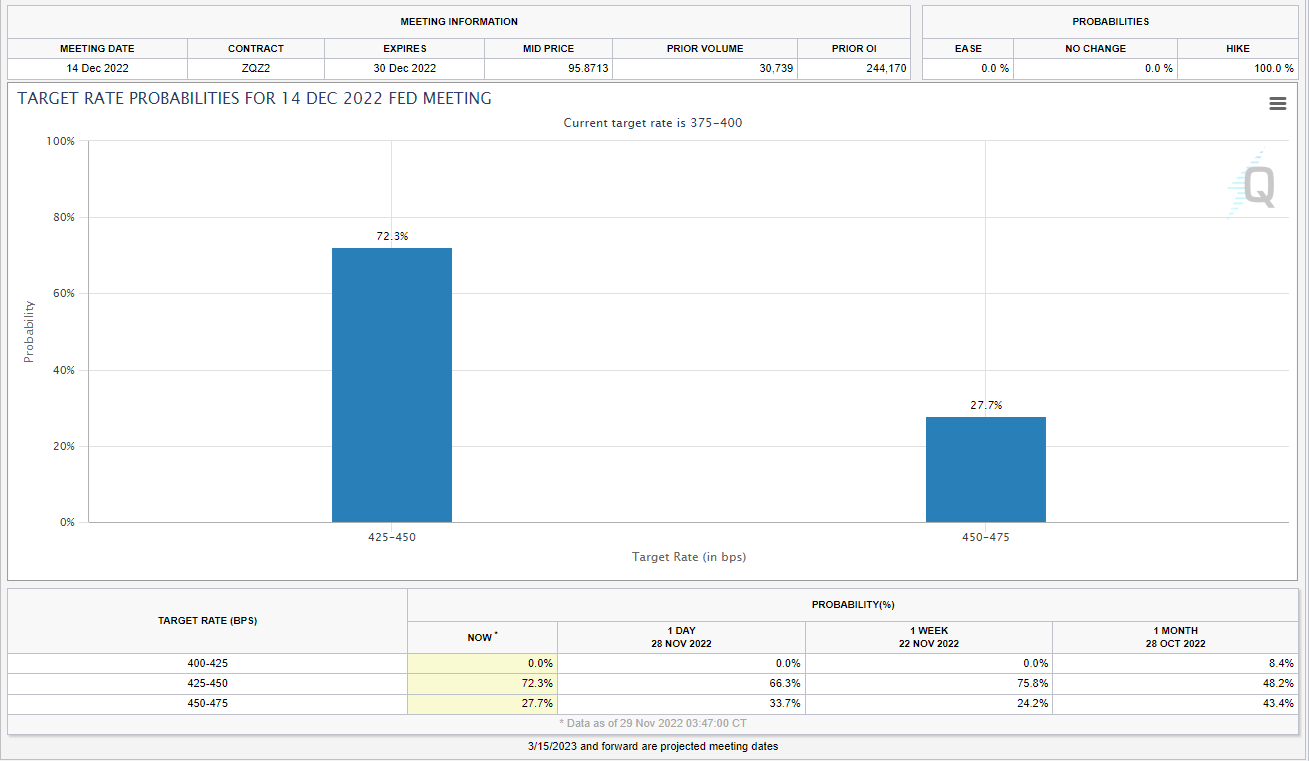 From a technical perspective, Gold printed a massive bearish engulfing candle close on the daily timeframe with no follow through thus far. XAU/USD remains above the key area of support (September and October highs) around $1730 while the 100-day MA provided significant support as price fell yesterday. Gold is trading within an ascending channel on the 4H timeframe which could see a push higher toward the $1767 level before eyeing recent highs around the $1786 area.

Alternatively, a break below the ascending channel and the 100-day MA could open up a retest of prior resistance turned support around $1730. Dollar index continues to drive the moves on gold and given yesterday’s reversal just as the US session began, caution is key.

IGCS shows retail traders are currently LONG on XAU/USD, with 74% of traders currently holding long positions. At DailyFX we typically take a contrarian view to crowd sentiment but due to recent changes in long and short positioning, we favor a short-term cautious bias.