Recommended by Cecilia Sanchez Corona
Trading Forex News: The Strategy
Get My Guide

Federal Reserve Bank of San Francisco President Mary Daly said in early October the Federal Open Market Committee’s work is far from over as inflation continues to be elevated. Despite mounting growth concerns, higher interest rates are to be expected, but Daly stressed that monetary policy decisions will be data-dependent, as the FOMC recognizes the growing risks to financial stability as central banks around the world raise interest rates.

While the International Monetary Fund reduced its global growth forecast for 2023 and warned “the worst is yet to come”, Daly recently referred to inflation as "a corrosive disease” that is eroding people’s purchasing power by depressing real wages, especially for the most disadvantaged, but must be addressed.

For context, the Core CPI, which measures consumer prices excluding energy and food, increased by 6.3% year over year in August, up from a 5.9% increase in July and following a peak of 6.5% in March. The September reading is expected to be released tomorrow.

The minutes of that monetary policy meeting were released today and confirmed that the FED will continue to raise interest rates despite mounting risks, but acknowledged that at some point the pace of tightening will slow to assess the impact on the economy and financial system.

During that same meeting, the FOMC revised its economic projections and signaled that they could continue to raise interest rates without triggering a recession, though a sharp slowdown is to be expected as they forecast a meager 0.2% growth in 2022 and +1.2% in 2023.

Markets are hungry for any evidence of a "Fed Pivot” but Daly, a non-voting member of the FOMC in 2022 and 2023, has made it clear that this scenario is unlikely to occur. Investors have speculated that the Fed will raise rates in 2022 and then cut them in 2023.

Daly has stressed that Fed watchers have mistakenly interpretated the eventual pause in rate hikes as a policy shift. On the contrary, interest rates will be raised to a level restrictive enough to curb demand and restore price stability, and then held at that level while the economy and financial system are assessed.

However, in a recent interview with Bloomberg, the San Francisco Fed president stated that the upcoming FOMC decisions will be highly dependent on data to reduce the danger of "doing too little or too much." Faced with market concerns that the economy could slip into recession induced by high interest rates, Daly stated that the Fed must be "nimble and resolute." Determined to combat inflation, yet flexible in its execution. She also acknowledged the growing concerns about financial stability as a result of global central bank tightening, noting that she does not see financial disruption at this time but that it is vital to keep a close eye on the situation since the Fed is the lender of last resort.

The markets are pricing in a 75 bp rate hike at the FOMC November 1-2 meeting. Tomorrow's CPI data will provide a more accurate picture of the status of the economy, and the odds may change accordingly. 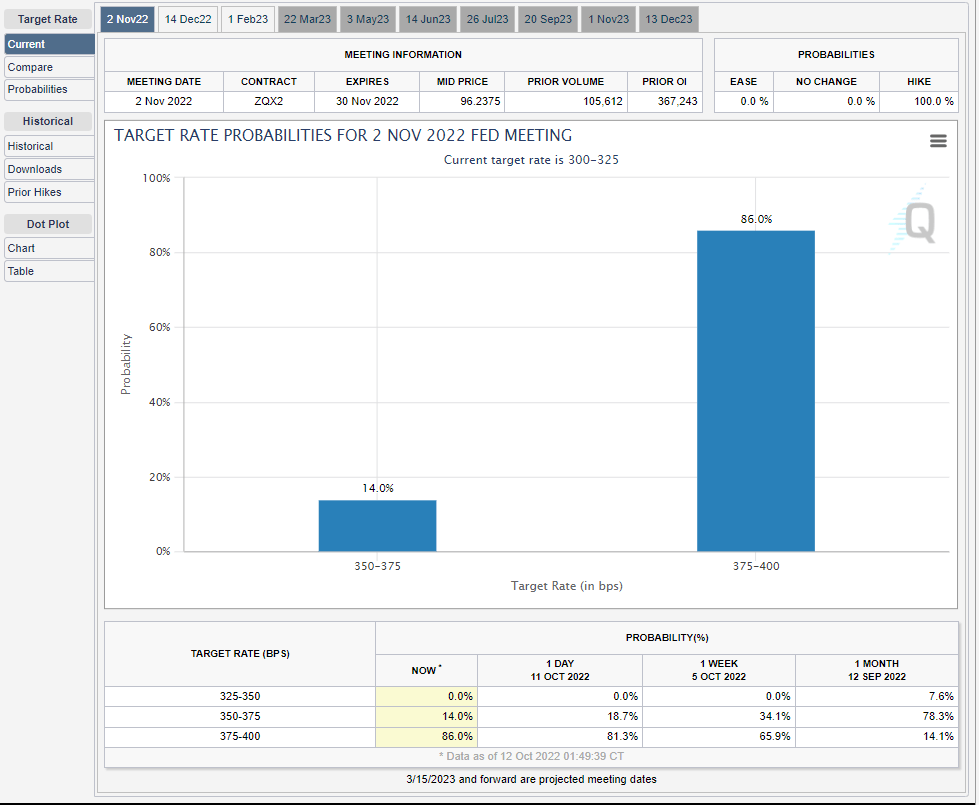 • Are you just getting started? Download the beginners’ guide for FX traders

• Would you like to know more about your trading personality? Take the DailyFX quiz and find out

• IG's client positioning data provides valuable information on market sentiment. Get your free guide on how to use this powerful trading indicator here.