There remains a significant sense of indecision over what the most important fundamental themes are behind the global market while the top drivers of the past year have also found temporary balance of late. That has translated into congestion and chop for general risk trends in the broader markets and its representatives like the S&P 500 (my preferred, imperfect baseline). It has also throttled the benchmark US Dollar. As the world’s most heavily traded currency, it stands at the crossroads of these systemically-important matters. This past week, the DXY Dollar Index carved out a very restrictive 6-day and 138-point range; which is the equivalent activity of the holiday conditions we slogged through less than a month ago. Notably, the form last week’s price action tacks was a ‘diamond’ pattern which typically ends with a break – though that does not assure for follow through. The prevailing trend is still bearish for the Dollar these past three months; but considering the DXY is at the midpoint of its 2021-2022 bull trend, an argument that the market has discounted the currency’s shortcomings can be made. 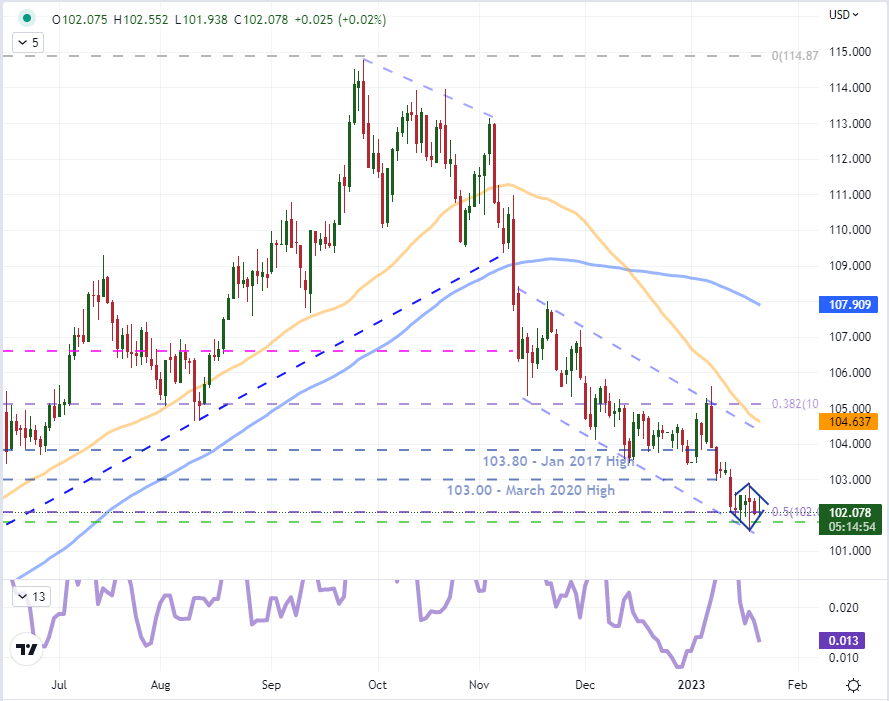 Technicals alone are not sufficient for me to tip my sense of probability for bullish or bearish commitment on the Greenback. The fundamental charge will play a critical role in establishing both direction and tempo. That said, there are two dominant themes that have accounted for much of the market’s development this past year; and so, I will be monitoring their development particularly closely. Rate speculation for the Federal Reserve (particularly in contrast to its major counterparts) was of principal importance particularly in the Dollar’s bullish run through September. However, since the Fed signaled it would start backing off the 75 bp clip of hikes and the market was comfortable in pricing a viable peak rate; bears have worked through the nuance of further rate potential to eventually find equilibrium. There is still a strong 20-day correlation between the DXY and the implied Fed Funds rate through December, but it has been less consistent of late compared to the currency’s other principal role. As a ‘risk asset’, the Dollar had a brief stint as a carry currency on the upswing in global rates, but its safe haven status was bolstered by the markets amplified volatility. The correlation between the DXY and VIX is slightly stronger but more consistency over the past 6 months. It would also be more likely to override competing fundamental themes should risk aversion (the VIX) pick up – because fear is far stronger an emotion than greed. 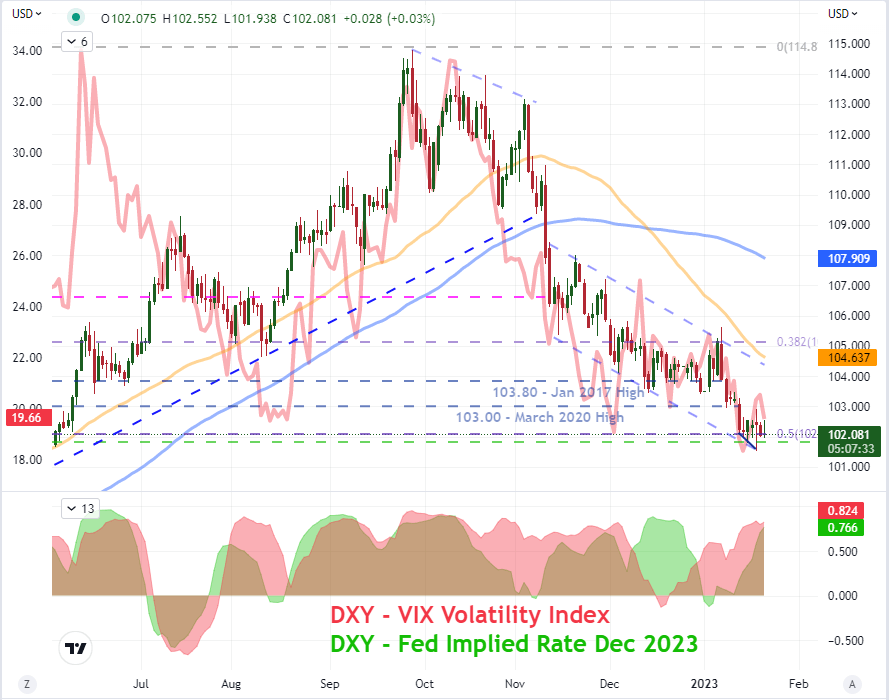 What kind of event risk are looking for to stir the general fundamental backdrop or the more systemic themes? There is US event risk scheduled through the week, but there are certainly more important events in the mix. If you are looking for a significant shift in interest rate projections, there is one event in particular that looks more than capable: Friday’s PCE deflator. This series is the Federal Reserve’s favorite inflation indicator – though it has a spotty history of generating volatility compared to the market’s preferred CPI. It’s possible that other event risk can tap into rate speculation, but the other top events are more aligned to filling in a growth/recession discussion. Tuesday’s release of the January PMIs will give a bigger picture of the developed world’s economy health ahead of the IMF’s WEO update at the end of the month, but the US in particular has been deflated in the most recent updates from this measure. The first reading of US 4Q GDP on Thursday is more headline-weighty, but the scenarios here are skewed for the Greenback. A strong reading can signal the Fed will continue its inflation fight while a weak reading could spur risk aversion and thereby the USD’s safe haven status. As for earnings, I will view it more as a ‘risk’ prompt than a direct US performance designator; and there too, the more dramatic impact would be ‘risk off’ (which is generally Dollar supportive).

Top US and Global Macro Event Risk Next Week 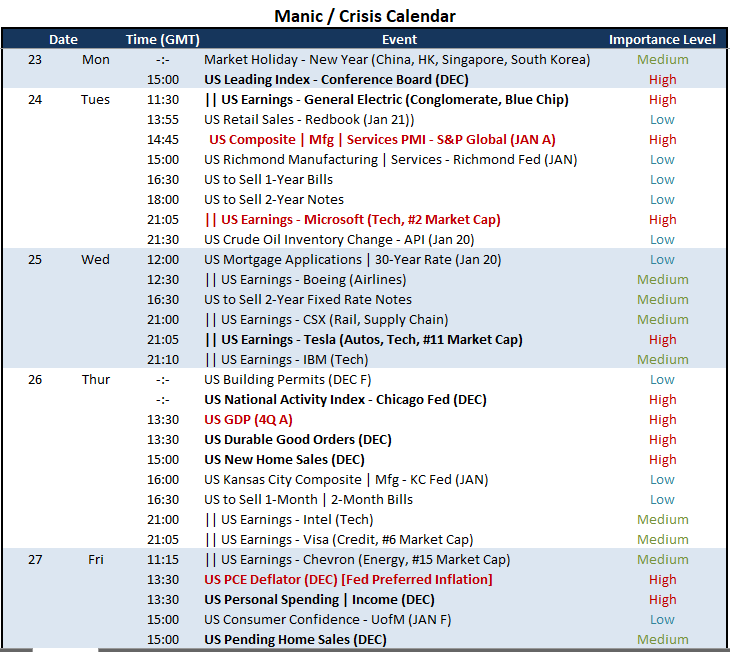 Among the Dollar pairings that I’m most interested in heading into the new week, EURUSD most directly reflects the indecision the Greenback is struggling through. Considering this pair is the principal component of the trade-weighted index, there is no surprise that it is essentially a mirror of the DXY. That said, the Euro side of the equation is fairly mute given the scheduled docket ahead. Without a competing – or amplifying – fundamental counterpoint, the outcome of its narrow range is more likely to be decided by the Dollar’s side of the story. What’s more, given that this is the most liquid pairing, it can also mute some of the ancillary and unpredictable developments which could pop up unexpectedly. 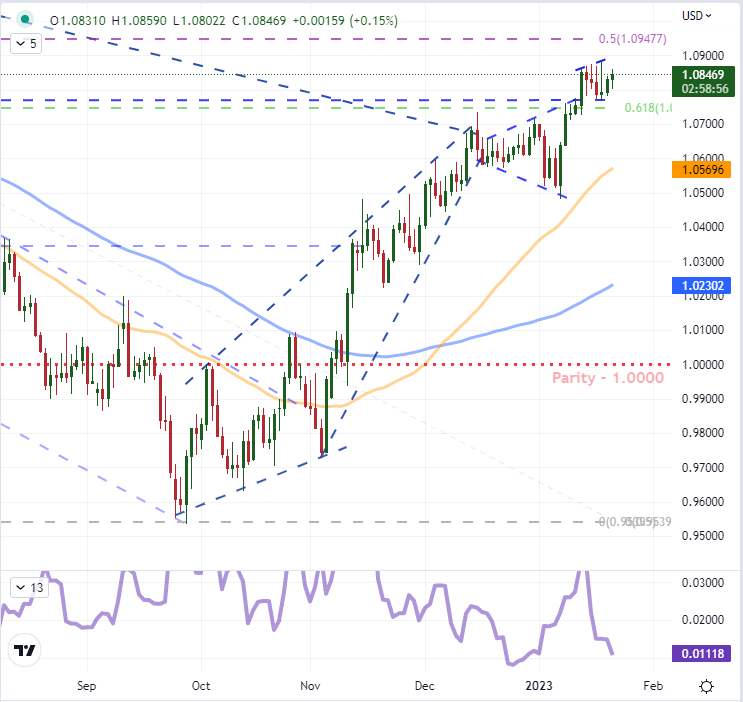 A far more ‘purpose’ driven Dollar cross to consider is USDJPY. This is the very much sensitive to the two dominant themes mentioned above. In fact, the dramatic -16 percent slide from peak to trough these past two months was heavily motivated by the deflated interest rate outlook for the Federal Reserve. If the market’s outlook is indeed leveling out, that would mean that the potential for further depreciation on this front is significantly lessened; while the alterative jump to match the Fed’s own forecasts (markets see 4.40 percent by year end and the Fed 5.10 percent), then the rebound could be substantial. That said, the risk implications here is somewhat distorted. Both Dollar and Yen are treated as ‘safe havens’, but the Greenback is the more traditional harbor capital. The Yen appreciates (Yen crosses drop) owing principally to the carry trade unwind that happens in ‘risk off’ periods. That said, is there still that much unwinding to do when we have already dropped half the two year build up in the span of just a few months?

Chart of USDJPY with 50 and 100-Day SMAs, Spot to 50-Day Differential Index (Weekly) 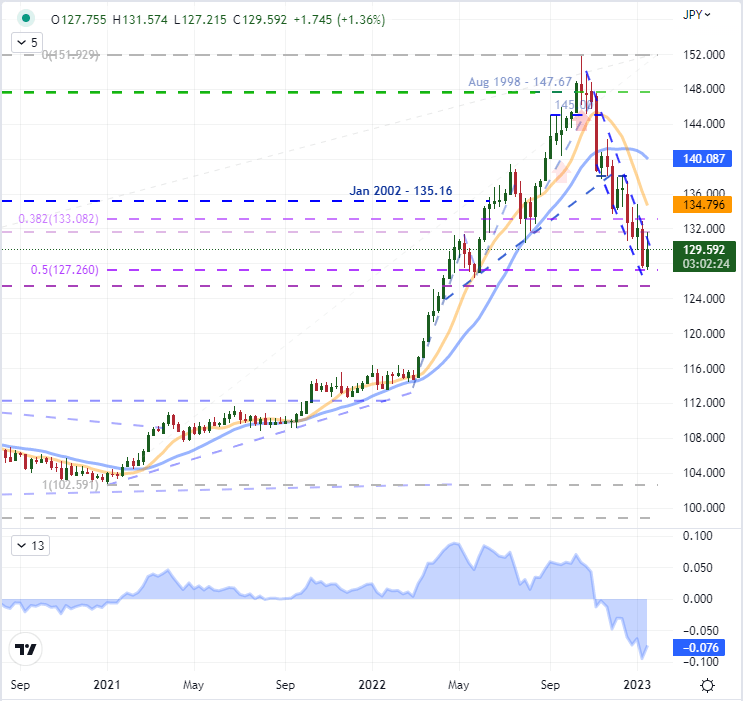