WTI crude oil prices rallied almost 2 percent on Wednesday, bringing this week’s rise to about 10.3% so far. If the commodity can hold onto these gains, oil will have the best 5-day performance since late February. That was back when Russia invaded Ukraine, triggering supply disruption concerns from one of the world’s largest oil exporters.

All eyes were on the Organization of the Petroleum Exporting Countries and allies (OPEC+) over the past 24 hours. The oil-producing cartel agreed to reduce production from next month by 2 million barrels per day. This is the largest reduction since members began working together during the onset of the global coronavirus pandemic in 2020.

In reality, these production cuts might come in below expectations. According to Saudi Energy Minister Abdulaziz bin Slaman, numerous participants are struggling to meet targets as is. In response to this, the United States government noted that it would release about 10 million barrels from strategic reserves – according to Bloomberg.

Meanwhile, Department of Energy (DOE) data showed that the nation’s oil inventories unexpectedly dropped by 1.36 million barrels last week. This reduction in supply helped WTI climb higher on Wednesday, in addition to the boost from the OPEC+ announcement. It also didn’t hurt that risk appetite improved as Wall Street reversed deep losses intraday to finish in the green.

With that in mind, traders will be eagerly awaiting the latest jobs report from the United States, slated to cross the wires on Friday at 12:30 GMT. Non-farm payrolls are seen rising 260k in September, down from 315k prior. The unemployment rate is also seen holding steady at 3.7%. Earlier this week, JOLTS job openings data unexpectedly declined, triggering cooling hawkish Federal Reserve monetary policy bets. A disappointing NFP print could do the same, perhaps offering growth-linked oil prices a boost.

WTI crude oil prices confirmed a breakout above the 20-day Simple Moving Average (SMA). Prices are now testing the 50-day line. This could still hold as resistance, maintaining the dominant downside focus. If not, the directional bias could become more neutral instead of bearish. A breakout higher exposes 90.37 before the 95.01 – 97.35 inflection zone kicks in. Otherwise, a turn lower places the focus back on the September low. 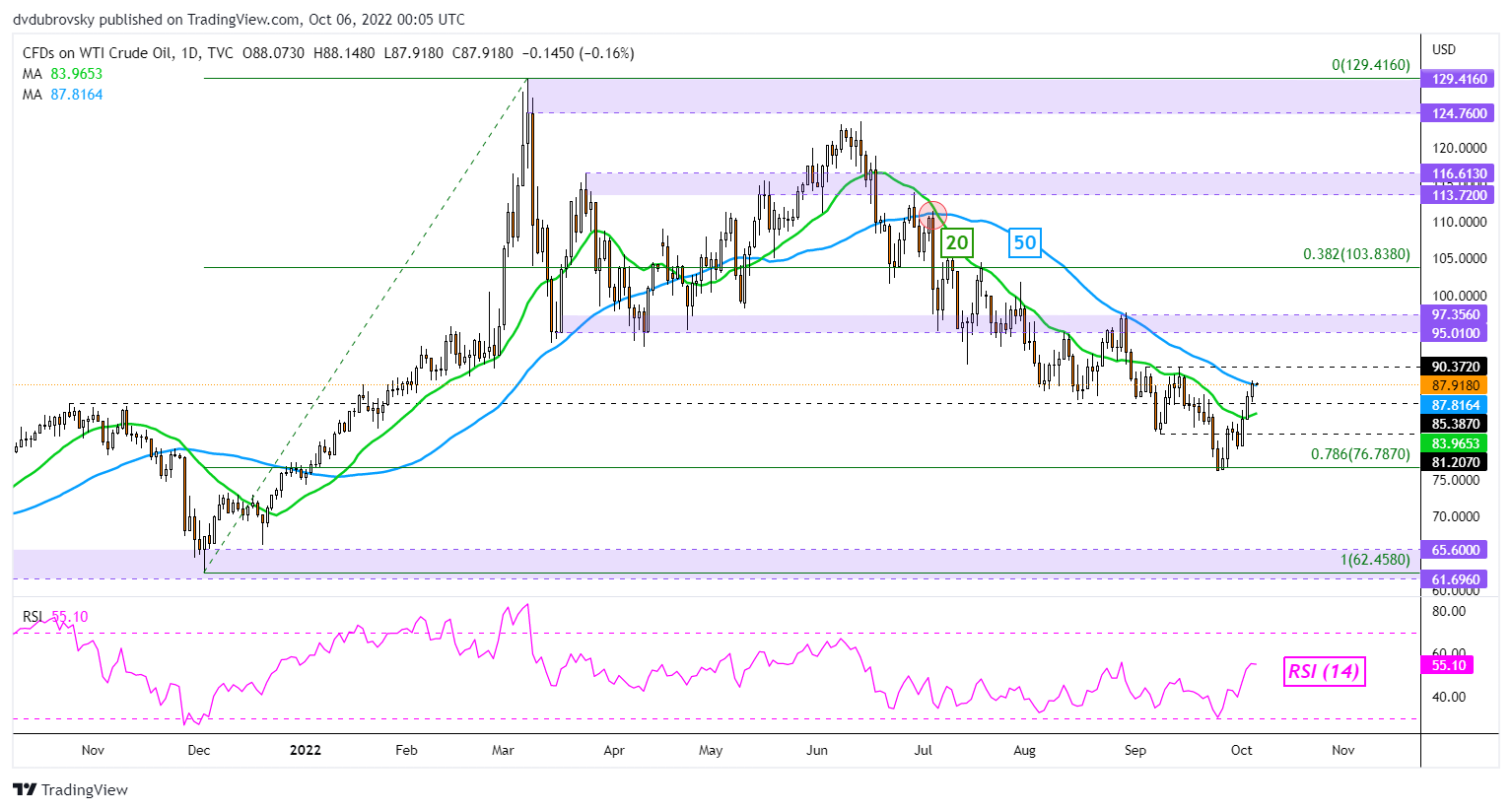