The Australian Dollar got whipped around last week in a 0.6186 – 0.6356 range as local and international news and data pilloried the currency.

Domestically, the jobs data was a slight disappointment with the overall change in employment for September coming in at 0.9k instead of 25k anticipated. Full time employment increased 13.3k, while 12.4k part time jobs were lost in September.

The relative dovishness of the RBA may continue to undermine AUD/USD. Ahead of their monetary policy meeting on the 1st of November lies the all-important third quarter CPI.

There will be a change on the reporting of this data point going forward whereby the Australian Bureau of Statistics (ABS) will provide a monthly update between the quarterly figure, which remains the key inflation gauge.

Those monthly readings will include 62 – 73% of the basket that is used to measure the quarterly figure. More information can be found on the ABS website here.

In any case, third quarter CPI will be closely watched this Thursday and a benign reading would vindicate the RBA’s relatively dovish approach. A hot number may put more pressure on the bank for higher rates at a faster pace.

The US, the UK and Canada have all seen a re-acceleration in inflation on their most recent measurements while the Euro-wide gauge was steady at 1.2% for the month of September alone.

All of these economic areas are experiencing higher CPI than Australia’s 6.1% y/y for the second quarter.

The US experience is of particular note, not least because it is the world’s largest economy, but because a large part of the Fed’s current problem is of their own making. They left policy far too loose for far too long.

The terms ‘base effect’ and ‘transitory’ have become embarrassing monikers for those involved and only time will tell if the RBA have done enough, soon enough.

Interest rate differentials further along the yield curve are also undermining AUD/USD as illustrated in the chat below. CPI may provide an impetus to change the interest rate structure that could see momentum build should that unfold.

Elsewhere, the commodity complex is also under pressure due to the strengthening US Dollar with iron ore trading near its low for the year. Rio Tinto announced during the week that they missed their iron ore export target by 1% but BHP were inline.

Overall, a lower AUD/USD exchange rate is mostly offsetting those declines with the trade surplus continuing at a clip of around AUD 10 billion a month. 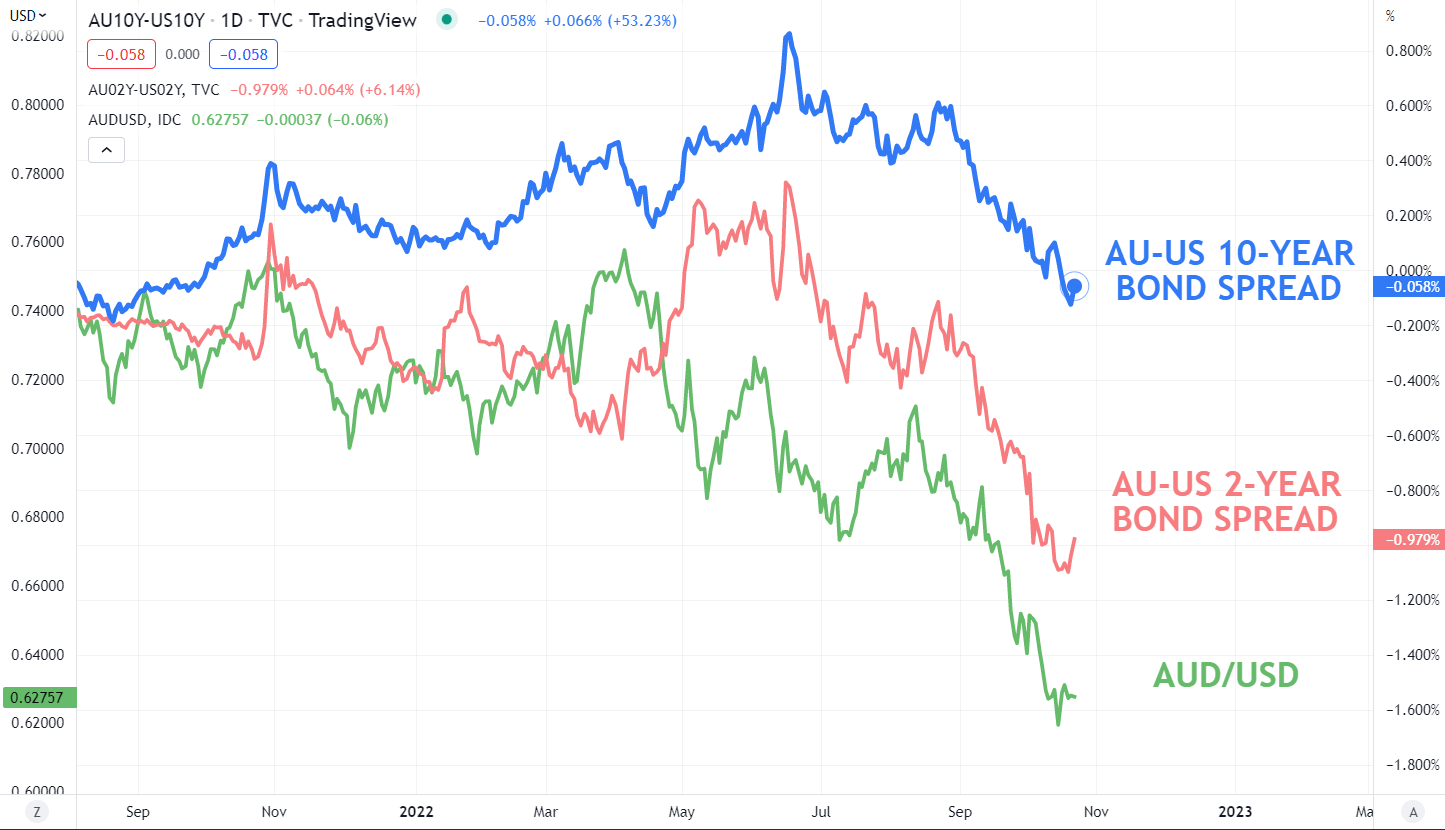