Stock Versus Stock: What Should You Invest In? 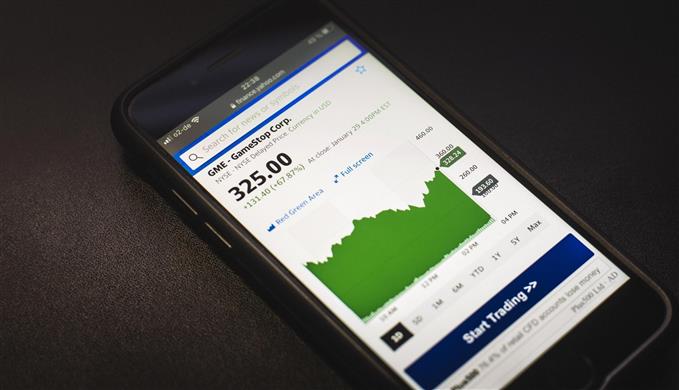 Invest in Sneakers or Nike: What’s the Better Buy?

As more people look to invest, build their wealth and understand the stock market, we wanted to break down the true value of investing. We’ve analyzed the most popular items we buy, subscriptions we have, and what might have happened had we invested in company stock instead of company products over the last five years (2016-2021).

At DailyFX, we break down what you could have made by investing in popular stocks instead of buying your favorite brand’s latest sneakers, subscribing to the latest streaming service, or buying the latest iPhone.

Should you buy stock(shares) or actual, physical stock such as goods and subscriptions? We reveal all.

This is how much money you could have earned by investing $1,000 in company stock for five years 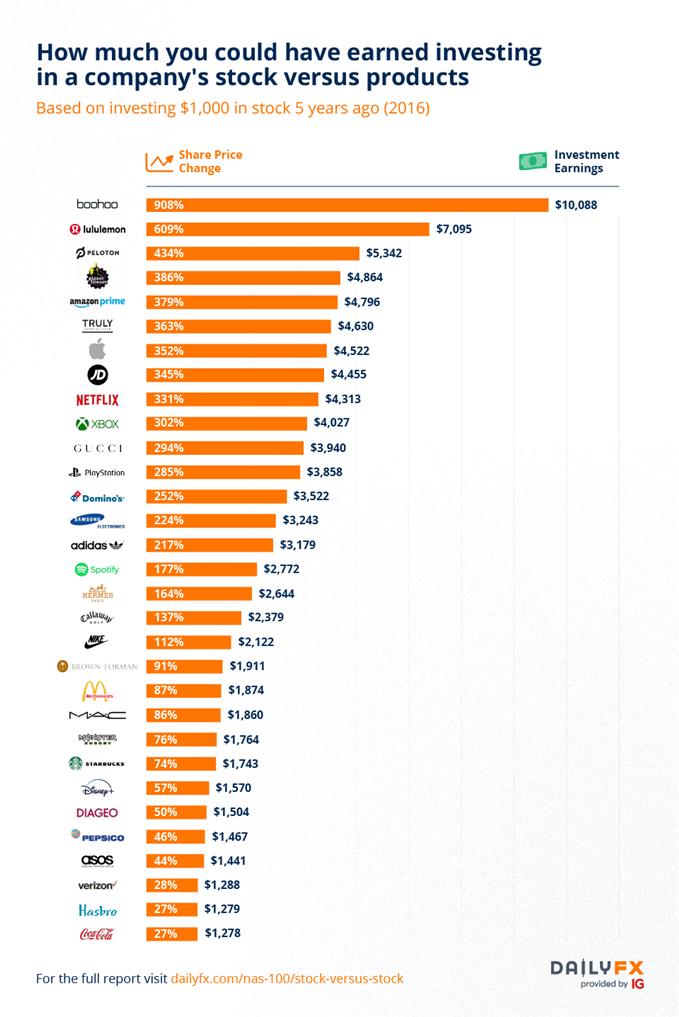 If, five years ago, you invested $1,000 in the company behind your favorite fast food stop - say, Dominos - you would have earned $3,522.51 today. By comparing what you might spend weekly or monthly, over the course of five years, it’s easy to break the market down and figure out what makes more sense to invest in.

You could have earned over $4,000 by investing in Microsoft instead of buying the Xbox One

By investing $1,000 in Microsoft rather than forking out $499.00 for the Xbox One when it was released, you could have made $4,027.89 - over four times as much money! While new console releases are always much-awaited events, they are costly and don’t necessarily retain their value over the course of a few years.

How Much Money Could you have made by Purchasing Popular Products Versus Popular Stocks?

It’s hard to know whether your spending habits are curbing your earning potential.

That’s why we made sure to compare popular stocks of best-selling products with companies who are really sought after in the stock market. Those popular companies include Apple, McDonalds, Callaway Golf, Lululemon, Xbox, Playstation and Starbucks. 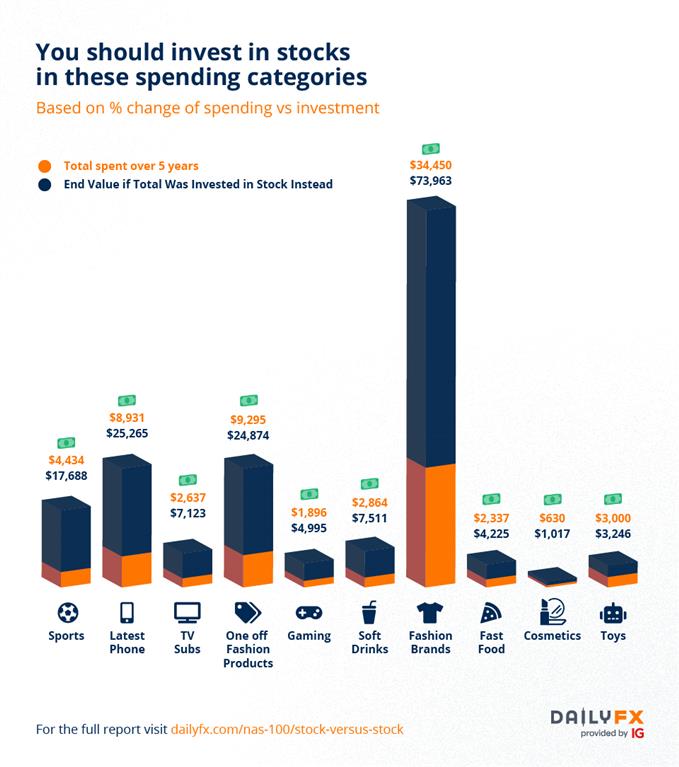 It’s clear that investing in product stock versus company shares changes based on the investment itself. Just take a look at Hermes! Your $8,400 must-have bag could have made you over 30% more… if you’d just invested what you paid for it. There are some spending categories where it’s obvious that our spending doesn’t make sense. If we saved our weekly, monthly, or yearly spend in these product areas, we’d be able to save so much more money! We break it down below.

If you opted to invest $1,000 in Nike instead of buying a new pair of sneakers each year, your bank account would be thanking you. Those $90 sneakers add up to $450 spent over five years, which had it been invested, would have only earned you $927.38.

Investing in Apple instead of the latest iPhone could have made you $16,764.35

By purchasing the latest iPhone each year, you’re spending $4,945.00. If you invested that in Apple instead, you could have made almost four times as much money.

However, investing $1,000 a year in Apple wouldn’t be as successful. With big companies like this, it’s possible you may need to invest big to win big.

Not buying a new pair of Lululemon leggings each year could make you $2,048.68

If you invested the average cost of buying a pair of the famous Lululemon leggings each year ($98.00) in company stock, you could make over $2,000.

Our spending habits show us a bit about how we’re losing or gaining money in the long run. There are some categories where certain stocks perform better in the market than others, which is why it’s important to learn how to value a stock. And in kind, there are some categories where it makes more sense to save your weekly or monthly spending and invest it in the company instead of a lump sum.

The following chart shows spending the categories where our money eats up our potential earnings. 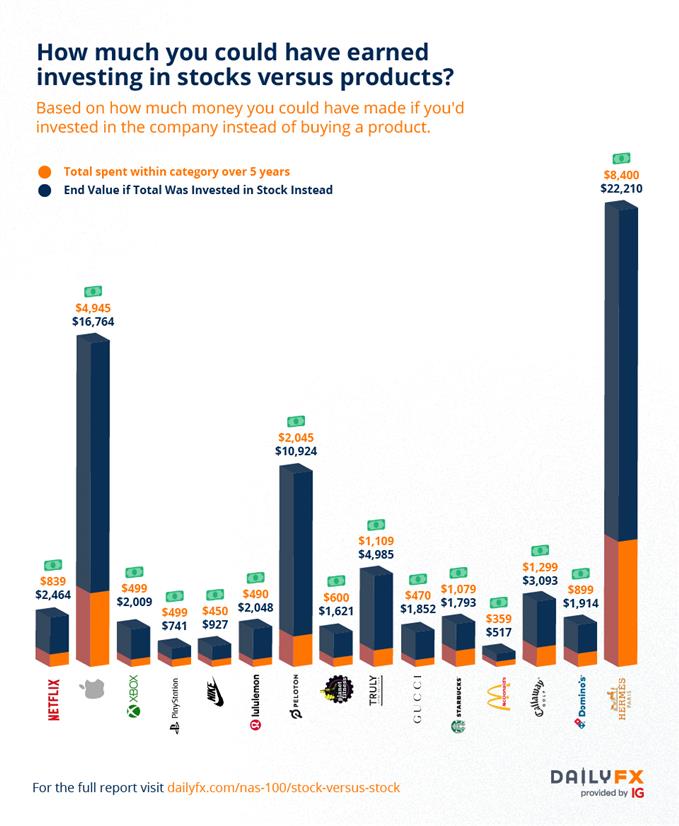 You could have made $7,123.42 by investing in your favorite streaming service instead of subscribing to it

Most of us have at least one streaming service - whether you’re subscribed to Netflix or Hulu, or if Disney+ is your go-to. Those subscription fees add up though. The standard Netflix subscription is $13.99 each month, adding up to a total of $839.40 spent through the course of five years.

If you were subscribed to Disney+, Netflix, and Amazon Prime Video for five years, you would have spent $2,637.60 on your services. But if you invested that money in shares of company stock instead, you would have found yourself with $7,123.42.

The best investment category is sports and athletics

The sports and athletics industry could earn you nearly 300% more if you invested a monthly or weekly budget in company stocks instead of products or services.

Here’s an example scenario. Say you’ve subscribed to a gym you don’t love. What if you invested that $10 per month in the company stock instead of a membership you don’t use? For instance, Planet Fitness membership starts at $10 a month, but it would make more sense to invest $1,000 over five years if it’s your finances you’re looking to bulk up. But it isn’t Planet Fitness stock that is the best investment in this category.

Buy physical stock (like products or services) or buy stock in the company that creates it. What’s the better investment? 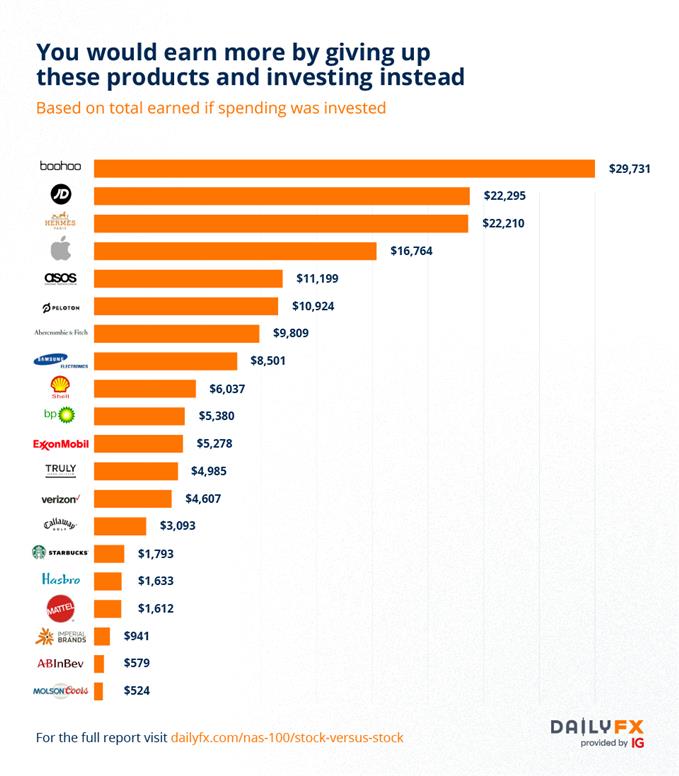 You could earn more over a five-year period by investing in certain products then reselling them, instead of investing $1,000 in shares of the company who creates them. When it comes to that comparison, it’s surprising to see how much money we spend on things regularly when we could save that money for the long term.

The latest tech gadget is a must-have for so many of us, but upgrading your phone each year is costly. Keeping your old iPhone and investing the cost in Apple stock, instead, helps you earn $16,764.35 over the course of five years.

There are a variety of companies where if we’d invested our weekly or monthly spending on their products in their company, we’d have more money at the end of the day. Sure, it’s hard to change how you spend - but seeing what you could have made instead makes a big difference.

Earn More Over Five Years by Investing $1,000 in Shares of Stock 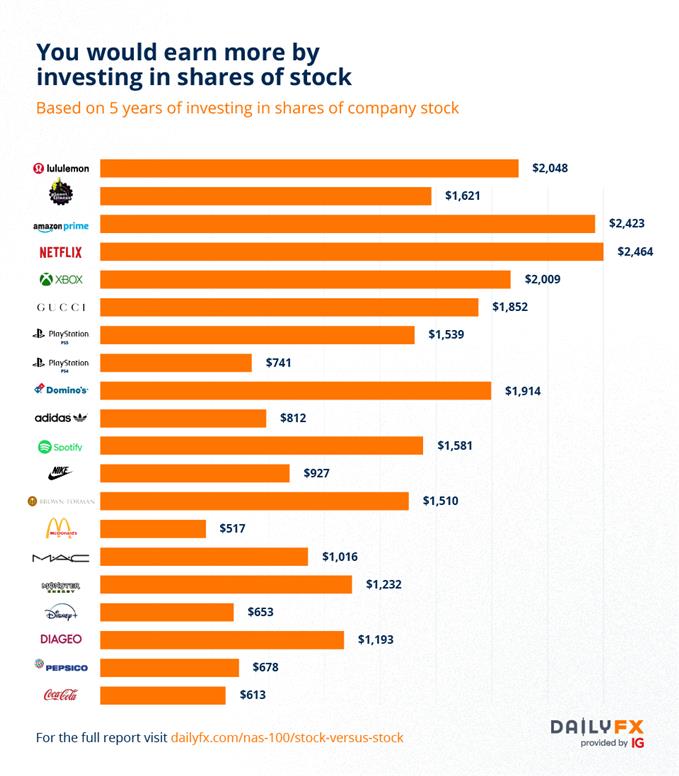 Imagine this. You’ve got $1,000 to invest in a company. But you’re unsure if that’s the best way to spend your money and see a return on investment, instead of spending money at the outset to purchase a product.

Similarly, if you invested $1,000 in Coca-Cola in 2016, you would be able to see almost a 50% return on your investment. However, let’s say you bought a can of coke or pepsi every week for five years… If you invested that price in the company instead, you wouldn’t see the same kind of return you might have had you invested in the stock instead.

Should You Invest in Stock of Products or Shares of a Company?

There is so much that goes into investing, regardless of whether you’re investing your hard earned money into stock or whether you’re considering how to invest your spending money into companies you care about. But the stock market can be confusing, which is why we’ve created a guide on how to pick stocks that will benefit your portfolio long term. Keep up with the top 100 largest publicly traded non-financial companies with our Nasdaq news and analysis.

Financial independence is a beautiful thing and at DailyFX, we’re all about helping people learn the markets, especially the next generation of individuals who want to learn how to invest.

In order to calculate the amount spent per year for each stock or product, the team calculated spending figures by either 12 or 52, depending on the purchase frequency (monthly or weekly).

The stock price of each company was collected next, and the yearly change calculated after. The sum of the amount spent each year was multiplied by the yearly change. This was repeated each year by taking the previous years’ final amount and adding on the extra spent that year and then multiplying this by the % change. A final figure could then be calculated to show the total % change and the total amount gained/lost if investing in the stock market rather than actual products. The total return would have been even higher if dividends were collected and reinvested over the course of the five-year period.

Each company was added to a category also, this allowed for categories to be calculated whereby the total spent over 5 years was summed across the whole category and the average change was calculated across all the products within the category.