Since mid-2020 the South African Rand has ridden the wave of “risk-on” sentiment similar to many Emerging Market (EM) currencies (see chart below). The country’s long-term structural challenges continue to occupy news headlines, but the Rand’s status as an EM currency has managed to shield it against some of this negativity.

ZAR Appreciation In Line With EMs Despite Ballooning Deficit 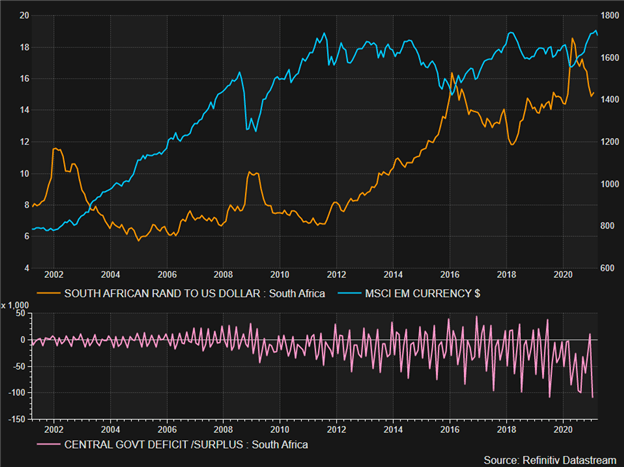 With Europe and the United States driving large cash injections into their economies, the Rand has diverged from the weakening Euro and U.S. Dollar. After clawing back losses from the initial lockdown phase, the Rand appears to be somewhat over-extended against both currencies. With markets starting to digest the U.S. stimulus package as well as Europe’s PEPP program, it may be time for these two major currencies to begin to recover against the ZAR.

Furthermore, the swelling budget deficit (see chart above) will soon be exposed via the local currency which is most likely going to be to its detriment. With interest rates remaining flat for the time being and inflation falling short of the South African Reserve Banks (SARB) target of 3% - 6%, this may open up an additional possibility of Rand weakness for the quarter ahead. 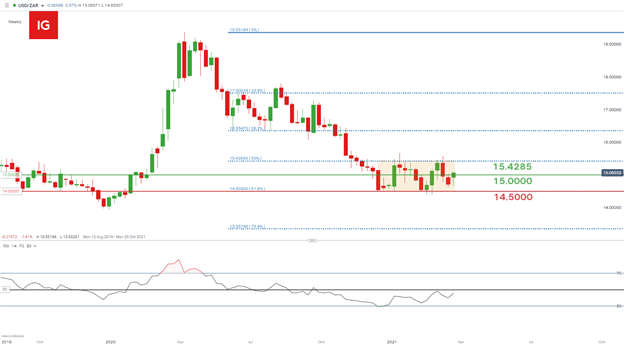 The USD/ZAR weekly chart has been consolidating since late December, forming a rectangle pattern shown in yellow above. This has the potential for a breakout should a weekly candle close outside of the rectangle’s barrier. The Relative Strength Index (RSI) is still below the midpoint level, but this downside momentum has been slowing and will likely surpass the midpoint while prices push towards topside resistance around the 15.4285 level. This outlook supports the fundamental backdrop of overall Rand weakness for Q2. 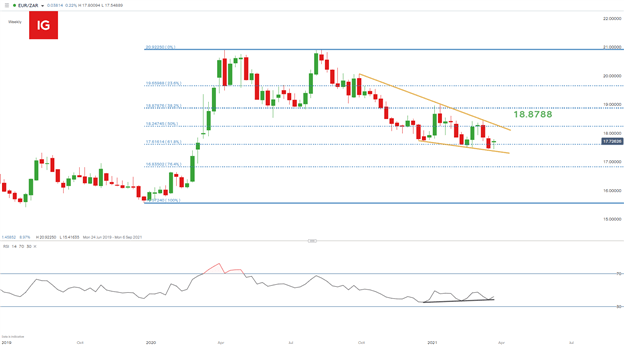 Technical analysis of the weekly EUR/ZAR chart paints a similar picture as USD/ZAR. After a strong 2021 for the Rand, the downward move has fashioned a falling wedge formation which generally follows on from an uptrend, and is often approached with the aim of bullish reversals.

The RSI acts as a substantiating factor in the bullish viewpoint as declining prices in EUR/ZAR are coupled by an increase in the Relative Strength Index (black). So while price was making lower-lows, RSI was making higher-lows. This is commonly referred to as divergence but more specifically ‘bullish’ divergence. Should this technical reversal signal unfold and break above topside resistance, the 38.2% Fibonacci retracement level will serve as the initial resistance target at 18.8788 followed by the 19.0000 psychological level.