See how retail traders are positioning in EURUSD, USDCHF, USDJPY and other Dollar-based majorsusing the DailyFX speculative positioning data on the sentiment page.

There are three separate currencies that carry significant potential for volatility over the coming trading day: the Dollar, Pound and Canadian Dollar. The Bank of Canada (BOC) rate decision holds significant potential to significantly charge the Canadian currency given the changing tide of global monetary policy. Yet, where collective central bank intent is presently the dominant fundamental theme on many radars, it is unlikely that this small group's intentions will hit the deep fundamental nerves to get the global market moving. As for the Sterling, the run of May data from the UK - GDP, trade, construction activity, industrial production - is not only difficult to spin into a global influence, it may even struggle to keep the local currency moving as Brexit is an overriding concern. In the US, Fed Chair Jerome Powell's testimony and the FOMC meeting minutes not only taps the key productive theme, it comes from a group with the greatest global reach. That translates into larger global impact but also a greater potential response (intensity and duration) for the Dollar. 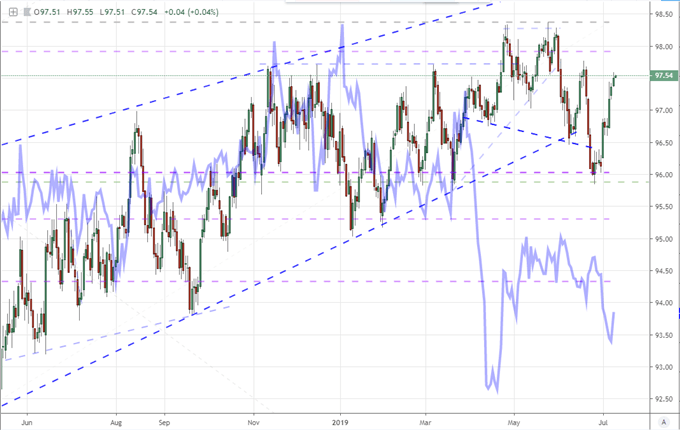 Volatility Alone Does Not Make for Favorable Trading

If you simply seeking out the greatest potential for sheer volatility, you can simply look to pairs that house multiple fundamental sparks. USDCAD is arguably facing a slightly greater risk of overall market impact but GBPUSD could represent a significant move of its own should the Dollar's influence compound the Sterling's steady decline. Yet, volatility isn't what traders should seek out. Volatility is at its root, risk. A dramatic increase in activity without a reasonable course with probabilities can quickly translate into fast moving markets that swiftly run against any positions you intend to take. When there is further conflicting surprises, the lack of direction can turn into a problematic chop that has wide enough swing to hit tighter stops without reaching comparatively more generous targets. Take for example a scenario for USDCAD whereby Powell dampens expectations for fast and deep Fed cuts and the Bank of Canada simultaneously suggests it sees no need for a cut over the foreseeable future. The former situation would lift the Dollar and the latter the Loonie. So which event and currency would carry the biggest initial move or hold out the longest for momentum? That is unclear and thereby difficult trading. 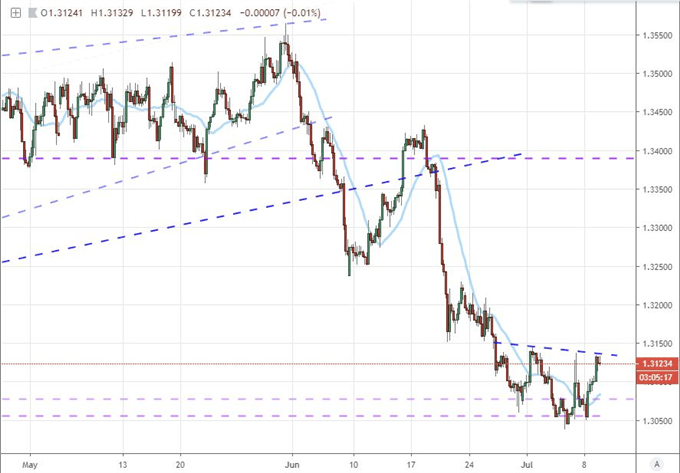 The Signal Properties of USDJPY

If we are looking to use volatility to our advantage is important to isolate the variables to the fewest, potent components. Since monetary policy seems to be principal concern and the Fed is the most important player in the spectrum (both for its size as well as position between normalizing and sinking back into accommodation), the Dollar still holds the greatest potential for amplitude. If we are looking for fundamental influence without the 'cross contamination' of competing fundamental issues, USDJPY is a unique reading. However, that is not to say that the carry-trade pair is single-minded with the scheduled event risk ahead. There is actually a conflict to this pair and the Fed insight we are due. The Dollar's response is such that a more restrained pace of easing from the Fed would bolster the Dollar. On the other hand, it would also weigh on risk-leaning assets with a dependency on external support like carry trade such as the Yen crosses. As such, whether hawkish or dovish, there are competing forces. Yet, which of these assessments carry greater weight in the market? This pair's ultimate direction may offer insight on that fundamentally-important question. 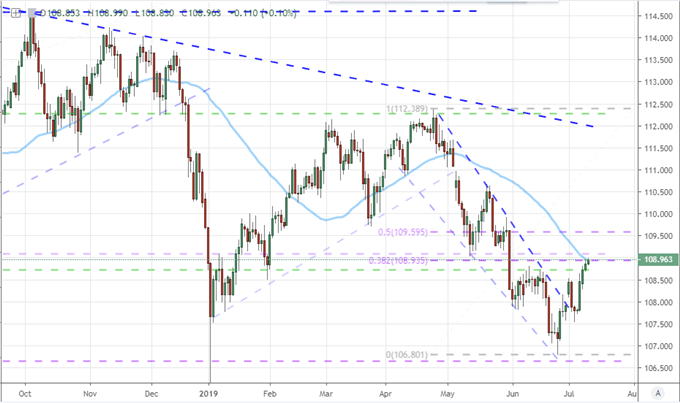 A More Refined Environment for EURUSD and USDCHF

Should our interests run more along the lines of individual opportunities rather than fundamental cue for the broader financial system, it would be better to seek out Dollar-based pairs whereby the counter currency has limited charge of its own. As it happens, the world's most liquid Dollar cross and general currency pair, EURUSD, offers just such a Dollar-centric perspective. The Euro has seen its own fundamental uncertainties ease these past few weeks between an ECB policy that seems to be on hold for leadership change in October from current President Draghi to future leader Lagarde. As for the internal sources of instability, Italy's reprieve from debt procedures has materially lightened the burden of uncertainty. Without a key event of its own, the Euro is more likely to act as a willing sounding board for its more liquid counterpart. That said, its technicals are not particularly striking. As it happens, the correlation between Euro and Swiss Franc are high in the crosses with the latter threatening much of its own pressure. USDCHF has more standard technical perspective. We focus on the practical channels for the Dollar in today's Quick Take video. 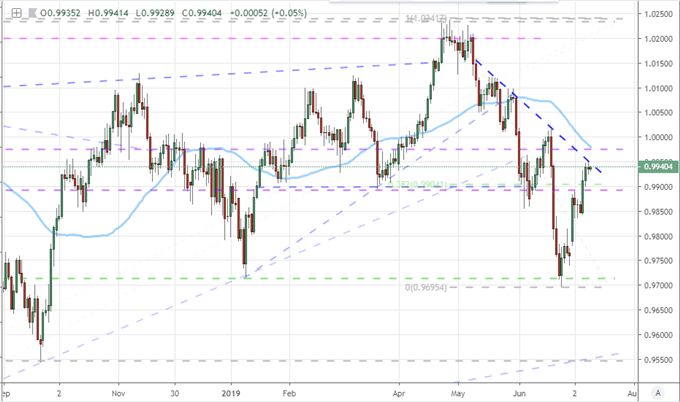