Gold Volatility Builds as NFPs Reminds Us Of the Primary Catalyst

See how retail traders are positioning in Gold, S&P 500 and Dollar-based majorsusing the DailyFX speculative positioning data on the sentiment page.

The US payrolls for June apparently hit a nerve for the market. A remarkable level of volatility was felt across the financial system with a particular degree of intensity for US equities, the Dollar and Gold. The response matrix from these unique assets suggests the market interpreted a lower probability of the Fed pursuing an aggressive pace of easing through the second half of 2019. Few other viable scenarios would explain the S&P 500 posting a strong gap lower on the New York open, one of the biggest single-day rallies for the DXY in 2019 and yet another enormous daily range (highlighted by an intraday reversal) for the precious metal. 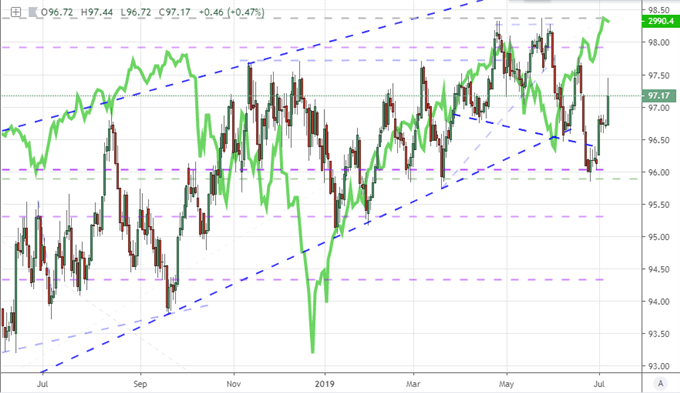 My interest in this metal over other key benchmarks is its appeal through various scenarios. For the Dollar and S&P 500, there are multiple competing fundamental issues - trade wars, growth, the effectiveness and intent of other major central banks. All of that can contribute to monetary policy, but these components' alterations can materially redirect the other market's response. If the Fed commits to easing but at a slow pace while other central banks dig deeper holes, the US currency can hold steady or even advance. The sentiment that sets the course for equities in the meantime can deem three cuts in 2019 a boon for extending record highs or 'not enough', without warning. Yet, for the the precious metal, virtually any measure of easing will translate to traditional currency devaluation. 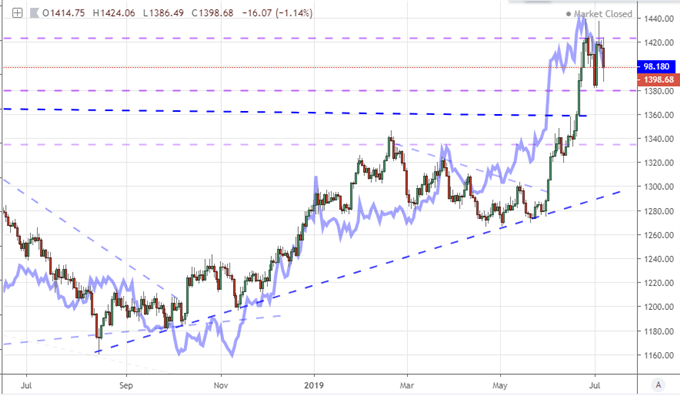 From the charts, we can see the makings of a high-probability break in the near future. The metal has been bouncing aggressively between a bullish extreme around 1440 and bearish floor of 1380. Within that broad $60 range, we have seen sharp large moves and sudden intraday reversals. In fact, the 20-day (equal to one trading month) average true range - ATR - has climbed to its highest level since December 2016. Further, those intraday reversals have created large 'wicks' on the daily chart that few technical traders worth their salt would miss. This all adds up to extraordinary volatility. Such a degree of activity cannot reasonably hold a range if it persists. The question then is the direction of this eventual resolution. 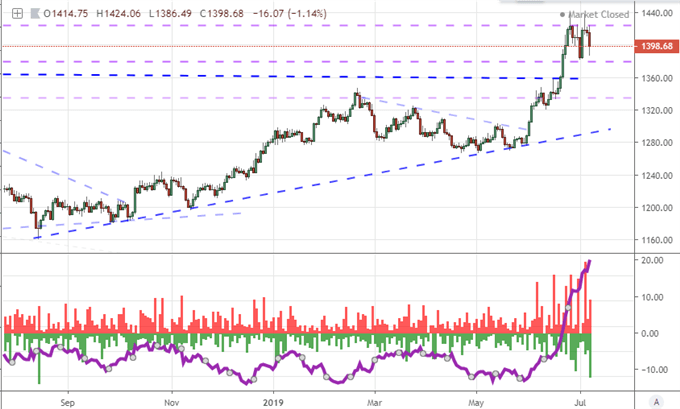 Gold has been climbing for almost 11 months now. While there have been periods of respite, the general trend has held fast as despite views on risk trends and economic activity making some course adjustments. When it finally cleared 1360, it became very clear as to what fundamental line the market was following. The Fed's confirmation that it would reverse course on its normalization policies officially meant that the world's largest central bank were returning to a policy (even if inadvertent) of collective devaluation of their currencies. If the Dollar, Euro, Pound and Yen are all under pressure accounting for approximately 95 percent of all reserves, there is little other alternative besides gold. So, whether the Fed cuts once or 3 times doesn't really matter to the ultimate trend - though it can certainly adjust pace. We focus on Gold in this weekend version of the quick take video. 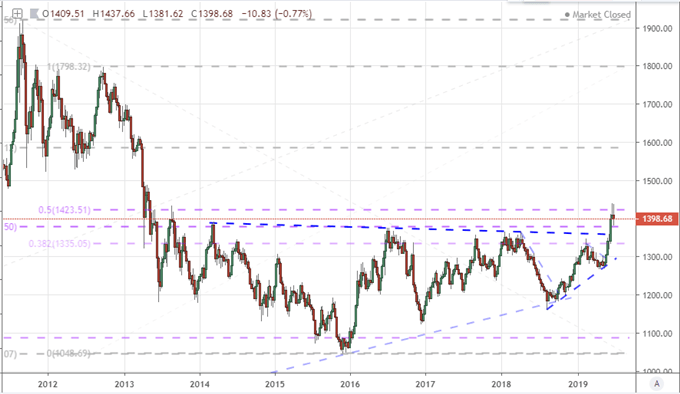