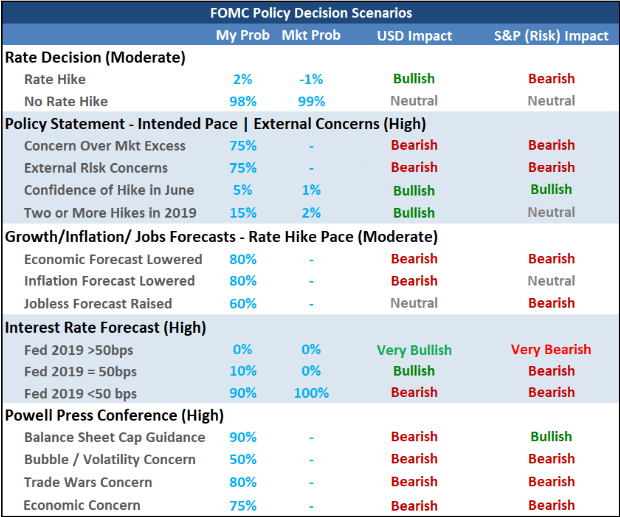 Sign up for my live webinar coverage of the FOMC rate decision or a host of other webinars on a vast array of trading topics on the DailyFX Webinar Calendar page.

Why This Fed Rate Decision Matters More Than Most

The Federal Reserve's Federal Open Market Committee will call to a close its two-day policy meeting today and offer an update on its bearings at 18:00 GMT. As the largest central bank backed by the largest economy and with a hand on the rudder to the world's largest financial market, each of the group's eight meetings a year carry significant potential. Yet, this particular event carries more fundamental and market-moving risk that the average update. This meeting is one of the 'quarterly' events for which we are issued an update on economic and interest rate projections from the group itself. The last SEP, or Summary of Economic Projections, from December lowered growth forecasts and shaved 25 basis points off of their previous 2019 rate outlook. In the past months, we have seen numerous institutions (government, IMF, World Bank, etc) lower their growth expectations while Fed officials have carefully voiced caution. As for the rate forecasts, the markets have seen speculation swing aggressively to the opposite extreme it hit six months prior. Where it was previously pricing in debate over four 25 basis point rate hikes in 2019 - well backed by the central bank's rhetoric - Fed Fund futures now show a 26 percent probability of a rate cut before the year ends. These divergent forecasts will need to be resolved, and the implications from change in either direction will be substantial.

Beyond the general change in monetary policy expected from the Fed for the local currency and capital markets' sake, there are serious global implications from the Fed more substantially changing tack. The US authority was the champion of a very nascent 'normalization' effort of global monetary policy that had hit unprecedented extremes over the past decade. In the aftermath of the Great Financial Crisis, a tidal wave of unorthodox accommodation washed over the financial system in a bid to promote stability and resuscitate growth. The effort bore fruit but there was never an obvious point for those at the helm to steer away from the open-ended support. As such, the external support became a feature of the environment. The reaches of risk trends were supported - if not necessitated - by the extreme effort. The further it develops into an essential pillar of the system, the greater the risk from future economic or financial problems (as there would be no recourse to mount another effective campaign). The Fed realized that and attempted to extricate itself to build back up a depot of policy ammunition. Despite the extreme speculation the accommodation fostered, the effort to normalize eventually took on an air of confidence that the environment was improving. So, how will the market treat further reversion to capital market backstop mode? Will softer policy intent spark further speculative appetite and spur lending or will it register as fear from officials that will urge the same from market participants?

The Implications for the US Dollar

Over the past few years, the Dollar has taken on a dual nature. It remains an absolute safe haven owing to its liquidity and credit quality, but that role is far more nuanced that many appreciate. Where a degree of panic in the speculative rank will spur investors to seek safety for their capital whereby the only criteria are the benchmark currency's primary traits, more moderate concerns will draw attention to some complicating aspects. Since December 2015, the Federal Reserve has raised rates and over the past few years it has slowly reduced its bloated balance sheet. That increase to the baseline for rates has in turn raised yield on market-based (speculative) assets. Naturally, a market that is comfortable in its complacency has sought out higher returns - even when the yield differentials are historically slim. In other words, the US Dollar has taken on more of a role as a carry currency. Should the Fed continue its nascent course and further reduce rate forecasts, the premium still built into the currency and its assets will deflate. If capital markets interpret that central bank's concerns as reason to reduce risk exposure, the burden on the Greenback will be amplified. There is always the chance that the Fed maintains its 50 basis point forecast (which could charge the currency as it would be wholly unanticipated) or their concerns turn into fear in the markets (that spurs blind risk aversion that caters to its absolute haven status), but those are lower probability scenarios. 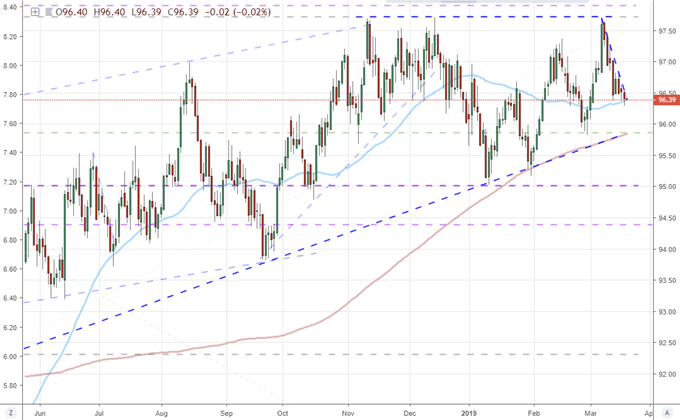 Pay Special Attention to the Dow and Other 'Risk' Benchmarks

While the Dollar reactions will be easier to plot out, the general risk response to this event are arguably far more important. While there has been plenty of jeering by diehard doves, the Fed's efforts to tame extreme monetary policy over the past years has stood as a signal that the system is robust enough to bring the risk back onto its own shoulders. It is also somewhat reassuring that at least one major central bank - the largest - has genuine room to implement another round of easing should it prove necessary. To see this group start to turn its course headings acts more as an indication that conditions are souring in the US - and global - economy. Against that backdrop, we start to question our exposure and whether we are comfortable holding the portfolio against a wider array of possible courses for the future - including ones that involve significant deleveraging amid risk aversion. What happens if the Fed decides to offer more support and a benchmark like the Dow or S&P 500 is only temporarily lifted or not lifted at all and then starts to fall in earnest? The absence of hope and crushing reality of misaligned risk trends could prove a systemic rebalancing that we have managed to avoid for years. We focus in on the Fed decision and its market impact in this Quick Take video. 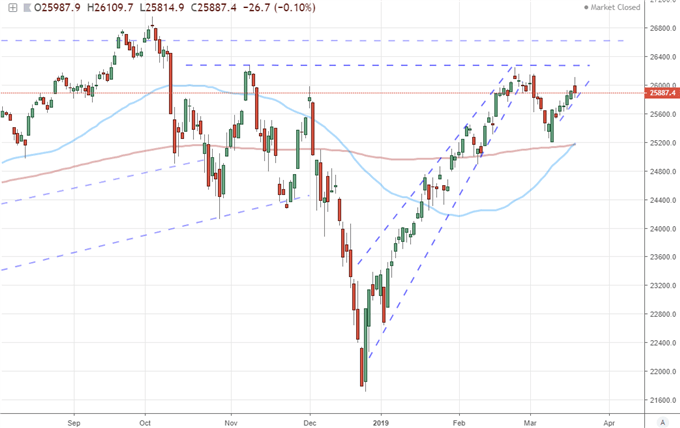