Euro, Dollar and Aussie: The Most Difficult FX Majors this Week

See how retail traders are positioning in US Crude Oil, EURUSD, FX majors, indices, commodities and cryptocurrency on an intraday basis using the DailyFX speculative positioning data on the sentiment page.

Traders harbor a natural appetite for volatility. This is a psychological need that I talk about frequently to remind myself as much as anyone else. In extraordinary market activity, market participants fantasize about reaching aggressive targets for larger profits and in a much shorter time. As with most fantasies, the favorable elements are emphasized and the risks associated are all but ignored. Volatility is by its nature not simply an increase in tempo but also a decline in certainty about where markets will be in the future. This is the foundation of how value is discovered: the greater the risk that markets move unfavorably and you lose money, the greater the expected return for pursuing the position. Whether wise or not, those chasing volatility frequently find it in assets that are already naturally active owing to an undercurrent of instability or will otherwise find a period of elevated action due to speculative charge, fundamental theme or scheduled event risk. The general environment is starting to show an increase in frequency and scale of market moves, but it is as-yet far from consistent. That keeps our reliance for measurable moves on known fundamental themes and scheduled updates. Volatility derived from fundamentals can sometimes provide a scenario where its impact is underappreciated, scenario influence dramatically skewed and outcome more readily discounted. Yet, that is the exception to the rule. Anticipation of key events or unresolved themes can render markets incapable of plotting a course, an abundance of updates can confuse as to which node is most important and key events are either fully discounted or very difficult to establish a reasonably reliable forecast. 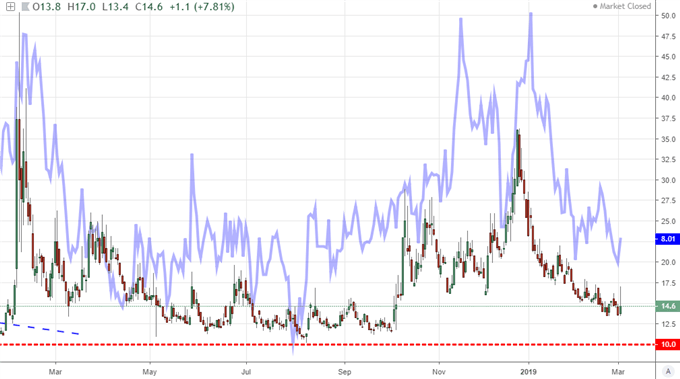 The Australian Dollar is the Most Troubled Major this Week

Among the 'majors' (the most liquid currencies in the world), the Australian Dollar will prove the most difficult to trade this week. It is showing nearly all of the risky elements with trading fundamentals simultaneously. First of all, the trading environment behind the currency is exceptionally convoluted. We can see in the lack of conviction in direction and pace - broken up by the extreme volatility of the early January flash crash - on any AUD-based cross but also in an equally-weighted representation of the currency as well. This is in large part a result of an overt disconnect from historical motivations such as risk trends, carry interest, China-connection, traditional economics, etc. If we could say the primary driver for the markets when under motion was on risk trends, we could simply focus on the correlation to the S&P 500 and the bearing of that index. Unfortunately, it is not that straightforward. Add to this general complication the fact we are due a laundry list of catalyst this week, and those trading the market are forced to keep a closer watch on developments with little conviction in how events may unfold. More general in nature, traditional risk assets have shuddered to start the week but the currency neither enjoyed the preceding two-month advance and has little premium to speak of relative to the past year. Links to China also seem to be overlooked in recent price action as neither the improved rhetoric around the trade wars nor recovery for the Yuan and Shanghai Composite have offered the Aussie Dollar any traction. Add to that anticipation of the RBA rate decision Tuesday morning and the Australian 4Q GDP release the following day, and traders will have to split their focus to discrete releases. Theme or event risk, growth or sentiment, internal or external drivers - which will take the reins for this currency? 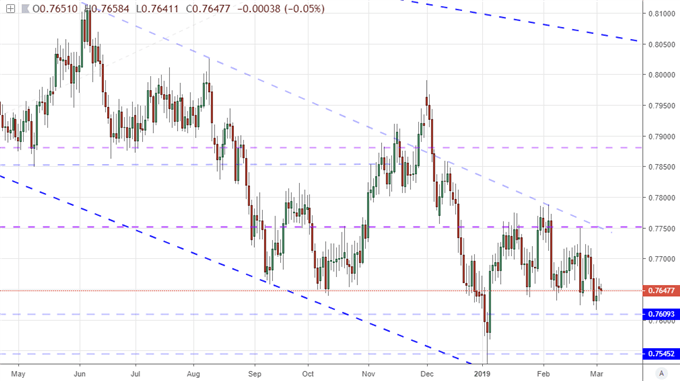 To round out the top three currencies that will prove difficult to trade this week, we have the two most liquid members of the entire market. The Euro has established a clear trend as it has generally failed ot follow a clear motivation between shifting tides of economic update, political instability and monetary policy reversal. Far from being impervious, the currency is simply awaiting clarity and significant change on any one of the various channels. Yet, just because it isn't clear on exactly what light to follow doesn't mean that the currency won't also find distraction from high level scheduled event risk ahead. In particular, the European Central Bank (ECB) rate decision scheduled for Thursday (sign up for the live coverage webinar of the ECB rate decision on Thursday) carries extraordinary weight both for the general environment of policy shifting to a more dovish course and the unique level of speculation built into the Euro through previous years. And so, with our attention pulled out to Thursday, what kind of productive movement can we expect in the days leading up to the release? What would we really expect from currency in the aftermath? In contrast, the Dollar does not have an explicit release that will not place its undivided attention on a single event. Where some may suggestion the Friday NFPs is uniquely leveraged, I would point out that the monthly release hasn't generate much in the way of immediate volatility, much less follow through. There will certainly be 'media hype' in the lead up and day of, but markets are acclimating to its tempered capabilities. What really makes for difficult Dollar trading is the abundance of effective, high-level themes competing for influence. Fed rate expectations have taken a dramatic turn over the past 5 months, growth forecasts have ground to lackluster pace, a ballooning deficit is starting to bring reserve quality questions into the main stream and even its safe haven status has not proven consistent (in bullish or bearish phases). In fact, it seems the most consistent role for the Greenback of late has been a counterpart to more productive currencies. This makes for quite a difficult trading environment. We look at the top three most difficult majors to trade this week in this Quick Take video. 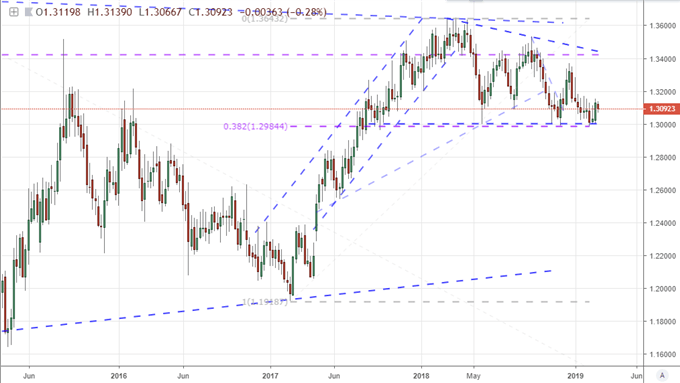