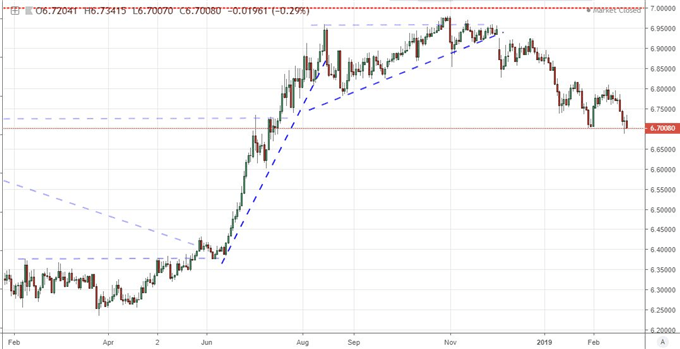 My Top 3 Charts to Watch for Trade Wars, Volatility and Growth in Speculation

Given the wealth of scheduled event risk on tap over the coming week and the convergence of so many systemic themes, there are many charts and graphs that can signal different opportunities moving forward. However, through so many headlines and potential volatility, there are a few critical considerations which can follow the pulse of the broader market trends for weeks or months to come. It is from these themes that trends will arise. With a certain outcome from any of these themes, we may see a shift from the most restricted backdrop for activity since Summer of 2014 to an environment driven to shift capital to specific market outlets that reflect sentiment. What are these themes and what charts most accurately reflect their interests?

1. US-China Trade Wars and Reports of a Currency Manipulation Understanding

There has been a noticeable shift in the tone surrounding trade relations between the United States and China these past few weeks. Negotiations have continued between the superpowers with high level officials (Chinese Vice Premier and the US Trade Representative among others) convening to discuss more structural matters that more reliably signify progress is being made. Confidence has been slow to pick up steam, not surprising given the many false starts we've seen in these discussions dating back almost a year. Yet, enthusiasm is starting to gain traction in earnest as we see the leadership on both sides of the table offer a perspective of confidence for the first time. At the end of discussions Friday, the rhetoric was particularly encouraging with President Trump, virtually all of his trade delegation and the Chinese contingent all speaking of progress and the proximity to a genuine deal.

With a March 1st deadline for a deal - or else the US will increase the rate on the $200 billion in Chinese imports it has tariffs on - we would expect a delay or formation of a deal soon. If the market joins the enthusiasm, we should see risk appetite catch to start the coming week via benchmarks like the S&P 500. However, the chart I'm truly interested in is the USDCNH exchange rate. This is theoretically at the heart of the trade stand off; but in practice, it is a poor measure of progress given the deep speculation of manipulation by policy officials on the Chinese side. Yet, this is another reason the chart should be watched closely. According to reports, one of the agreements secured in these preliminary discussions before Presidents Xi and Trump meet is a commitment to avoid currency manipulation by the PBOC or other state-run entity. Add this to your FX watch list.

2. Volatility of Volatility, The Seat of Complacency

Risk trends have taken a severe turn over the past few months. In the final quarter of 2018, the markets were pitched into a dramatic plunge that had many believing that the last holdouts were throwing in the towel and we were entering a genuine bear market in all speculative corners. Yet, after the Christmas holiday, a tentative bid arose and the climb hasn't really let up since. We have seen the S&P 500 steadily rise to erase much of its near-20 percent tumble and the blue chip Dow index secure a 9-consecutive week climb - the longest series of gains on that time frame dating back to May 1995. These are impressive charts in their own right, but I am concerned about the commitment to this sudden swing in sentiment. If there was anything to learn from 2018, it was that the markets are not willing to allow complacency to crowd out genuine threats to the financial backdrop.

A far better measure of the complacency and the speculative risk that it represents is the state of volatility. Priced-based measures of activity are clearly extreme with the 12-week EURUSD historical range dropping to lows last seen in the Summer of 2014 or USDJPY putting in for its smallest range this past week in decades. I am particularly concerned about implied volatility. These are measures that reflect genuine anticipation via exposure to traditional hedging assets (options). There is a lot to lose, the market has a recent history of sudden tide changes and there is heavy event risk in the week ahead. Yet, the VIX has slid back to its lowest level since October 3rd.

I think the most remarkable measure for this theme however is the VVIX. This is the CBOE's volatility of volatility measure. This too has dropped back to its lowest level since mid-2014. This suggests that the market sees little-to-no chance that sudden volatility will descend on the market - despite the wealth of systemic themes, the steady deterioration of growth or the recent examples of exactly that quick change in tempo. 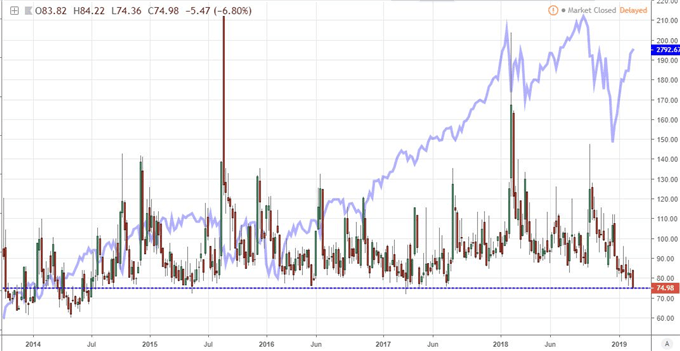 3. Where the S&P 500 is a Speculative Favorite, Yields Offer a More Earnest Growth Picture

There is nothing more systemic to the financial system than the concept of risk trends. It is practiced on an individual basis and on aggregate as a market. Volatility measures tell us the appreciation (or lack thereof) for sudden gales in exposure. Another measure of critical importance as we weigh the market's capacity to drive forward with complacency is the divergence that prevailing market prices open to underlying value. There are many different means for assessing the 'true' state of the risk-reward balance, but I am particularly interested in a fairly rudimentary comparison. The S&P 500 is one of the most blatant targets for those looking to gain exposure to 'the market' whatever their justification, so long as they want higher returns.

In contrast, there are a few assets that are not as popular or en vogue across the speculative rank and thereby require a little more fundamental justification to maintain their bearings. One such measure is Treasury yields. Government bonds are considered a safe haven on the opposite end of the spectrum to liquid equity indices. Considering bond prices generally move inversely to their yields, the latter should have a positive correlation to the stock market. When they do not follow the same course, something is amiss. When they are moving aggressively in opposition to each other, there is something explicitly long.

We see exactly that when we compare a chart of the S&P 500 to an aggregate of the world's most liquid 10-year government bond yields (US, UK, German and Japanese). The former has extended its climb while the latter has dropped sharply. This likely reflects the drop in economic forecasts (also the justification for monetary policy easy) and questions how robust investor conviction truly is. It is certainly one of the relationships to watch closely in the week and weeks ahead.