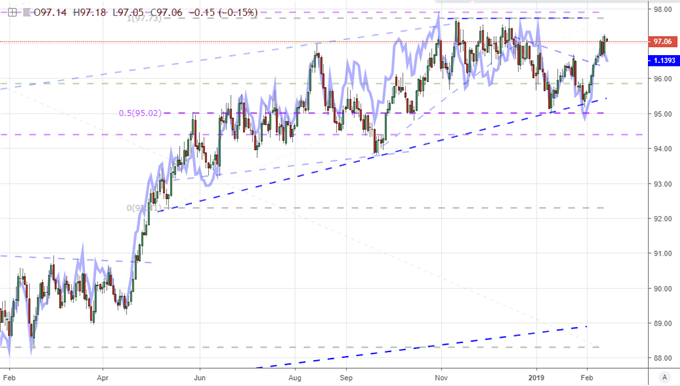 NZDUSD - Select a Pair With Both a Strong and Weak Currency

See how retail traders are positioning in Dollar, Euro, Pound and Yen crosses along with indices, commodities and cryptocurrency on an intraday basis using theDailyFX speculative positioning data on the sentiment page.

How Do We Determine What is Strong and What Is Weak?

A good question was posed to me during this week's Trading Q&A: how do we value a currency, is it always a relative assessment. While there are many different ways to come to a qualitative valuation, it will always be a relative worth - whether we realize it or not. In Forex (FX) trading, the concept of relative value is much easier to appreciate because it is the quote. However, everything that we price in a market has a relative monitor. Determining whether the price of a home, television or orange is fair or not requires an appreciation of the currency for which these items are priced. Most people assume the currency is fixed, but it isn't. In the financial markets, assets that we typically consider independent of qualifiers (like shares) are usually priced in native currencies, against 'risk-free' assets (typically Treasuries) or abstractly against opportunity costs (what I'm foregoing for this trade). If you are unaware of the change of the pricing instrument, you are not absolved of its influence. In an exchange rate, if you take a trade with only evaluation of one currency - even the most liquid component - you are missing much of the puzzle and operating more on luck than a thoroughly vested analysis.

Let's take an example from this past session to illustrate. NZDUSD triggered a remarkably frenetic swing this past session. The surge was largely centered upon the New Zealand Dollar's fundamental developments. The Reserve Bank of New Zealand (RBNZ) announced that it was holding its monetary policy unchanged, but the market seized on the forward guidance which smothered rising expectations for a forthcoming rate cut. We have seen many times recently where the alleviation of discounted risk triggers the same degree of bounce as an actual improvement in the fundamental backdrop. Of course, the question should then turn to conviction and follow through which rightfully should carry deeper skepticism. If you were moving on the initial charge, NZDUSD was a fine candidate. However, it wasn't the best for the short-term response nor does it carry the best potential through the medium term. That is because the US Dollar itself was doing well on its own across the market. The Greenback advanced against all other major counterparts with its 9th advance in 10 trading days. The Greenback's jump was not robust enough to offset the Kiwi's rally, but which one has the better potential for follow through all things considered from our current standings? In essence we with this pair, the effort is to determine which currency has the relative modest advantage over the other - a strong currency versus slightly stronger currency. A high probability and broader potential scenario is setting an overtly bullish currency against an equally explicit bearish counterpart. Setting the 'best' against the 'worst' should be our ultimate objective. 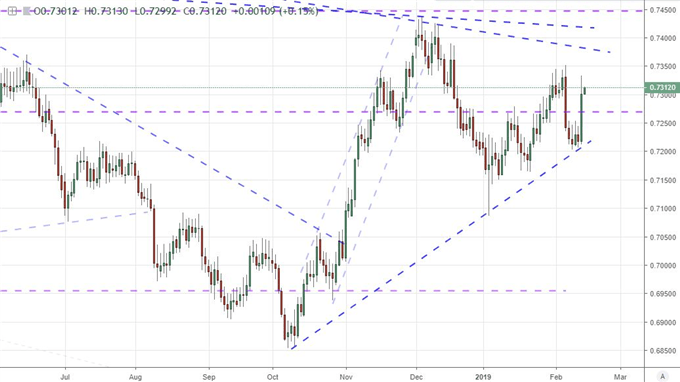 EURNZD Looks to Be One of the More Impressive Pairings

How can we determine which currency of the majors (we should stick to the liquid area of the market) is particularly weak? We can perform a fundamental evaluation which will follow the standard method of analyzing a market that is practiced the world over. On the technical side, the methodology is a little different. If we look at a pair, we are evaluating the relative backdrop of two currencies. To establish a more empirical view of the target currency, we can look at the charts of all its major pairings. We can also make an equally-weighted index, which I find cuts down the work and reduces error. With this approach, which major is the best counterpart for the Kiwi? The Euro. The single currency suffered a sharp drop this past session and positioned - through an index - at the major support trendline dating back to mid-2017. Of course, current volatility only moves you so far along the path. The outlook for the Euro is plagued with political risks, questions of economic health (with Eurozone and German GDP ahead) and the ECB's policy intentions. While EURNZD may not be a pair you consider often, or even at all, this approach to trade selection will help bolster the analysis behind decisions rather than relying on only half the picture. We discuss setting the weakest currency against the strongest in today's Quick Take video. 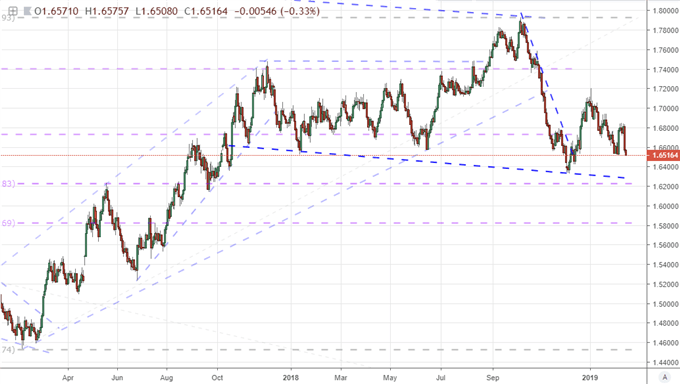